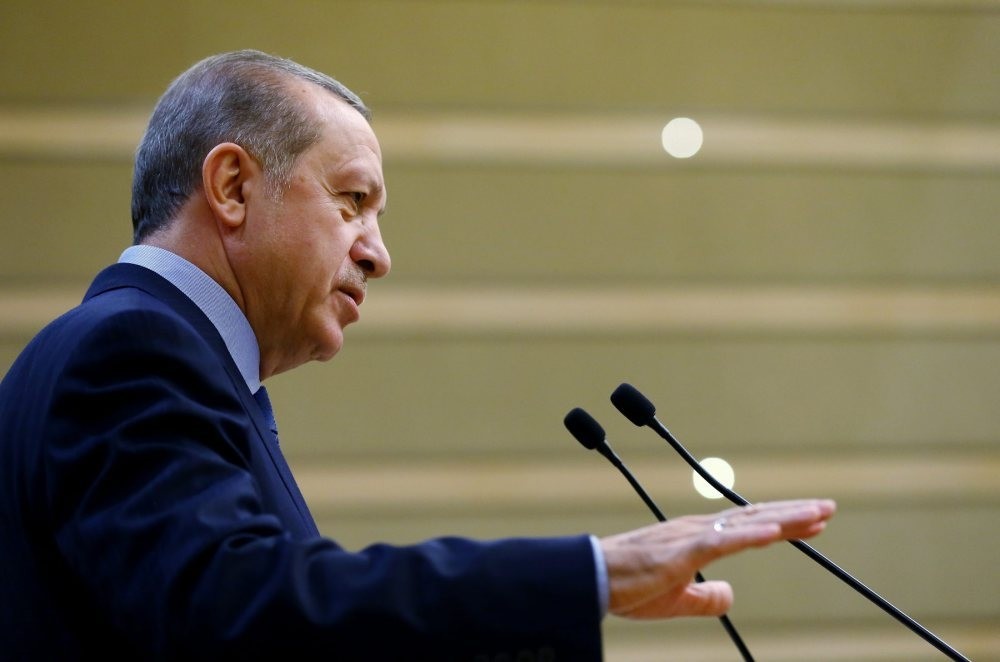 President Erdou011fan speaks at the 31st local administrators' meeting at the Presidential Complex in Ankara yesterday.
by Daily Sabah with AA Dec 08, 2016 12:00 am

President Erdoğan announced the beginning of a new period for foreign trade transactions in which local currencies will be in order to obviate the pressures of exchange rates, securing a prompt response from the Russian Central Bank

President Recep Tayyip Erdoğan said yesterday that a new period is commencing with the use of local currencies in foreign trade. Speaking at the 31st local administrators' meeting at the Presidential Complex yesterday, the president declared that future trade transactions with other countries would be carried out in local currencies. Pointing to recent consultations with Russia, predominantly focusing on further improvement in economic relations and expanding commercial transactions, he noted: "When we buy something from Russia, we will pay in their local currency; when Russia buys something from us, they will make payments in our currency. We will therefore discharge the foreign currency pressure on our national currencies," reiterating the resolution to expand the use of local currencies in trade with other countries. On Sunday, speaking at an event in Kayseri, President Erdoğan announced that payments in foreign trade transactions with Russia, China, and Iran will be made in local currencies. The president received a quick and positive response from Russia yesterday. The Russian Central Bank indicated there are no legal or technical obstacles to using local currencies as a medium of exchange in commercial transactions between Turkey and Russia.

Previously, at the 32nd Meeting of the Standing Committee for Economic and Commercial Cooperation of the Organization of the Islamic Cooperation (COMCEC) in Istanbul, President Erdoğan said that the size of the global Islamic finance market reached $2.1 trillion in 2015 and that the currencies therein should be converted to gold, removing pressure on them. He urged Islamic countries to resist global crises and pressures, pointing out that the importance of taking steps to remove the pressure of international exchange rates and stressing a participatory finance approach and a gold-indexed step in currency would be the right move.

'Last move on our economy'

Referring to the surging dollar against the Turkish lira, Erdoğan noted the last move was made on the country's economy. "In addition to the attacks on exports and tourism, our economy is targeted to be dragged down via foreign currency speculations. The reasons for the stagnant economy are more grounded in psychological and provocative actions, he said. "When we look into the reasons for the spiking dollar against the Turkish lira, we cannot see any concrete grounds with comprehensible economic explanations. We are facing an artificial hike in foreign currency" he noted.

In accord with President Erdoğan's stance, Prime Minister Binali Yıldırım construed the dollar rally as a global impact yielded by political uncertainties due to the result of the U.S. presidential elections, which created worldwide shock and a surge in the dollar as of Dec. 9. He also underscored volatility in currencies will calm down in the next one-and-half-months. "When the president-elect takes office, predictability will be secured, so foreign currency fluctuations will continue until Jan. 20," he said.

The Turkish lira gained 0.17 percent against the U.S. dollar over five days by Wednesday following President Erdoğan's call to protect the currency by exchanging dollars for liras.

The lira suffered heavily prior to Erdoğan's intervention due to global currency volatility in the wake of Donald Trump's presidential victory, as did many other currencies, particularly the Mexican peso. As President Erdoğan initiated a nation-wide call to boost the value of the lira against foreign currencies and remove the pressures, many people across the country flocked to exchange offices to convert foreign currencies. The campaign to exchange the dollar also secured support among various public institutions and commercial entities, which converted their assets in foreign currencies into lira or are starting to carry out transactions in the country's local currency. As a result of such initiatives, the lira later rose 4.62 percent against the U.S. dollar, pushing the dollar/lira rate to 3.4310 from a historic high of 3.5975 last Friday.