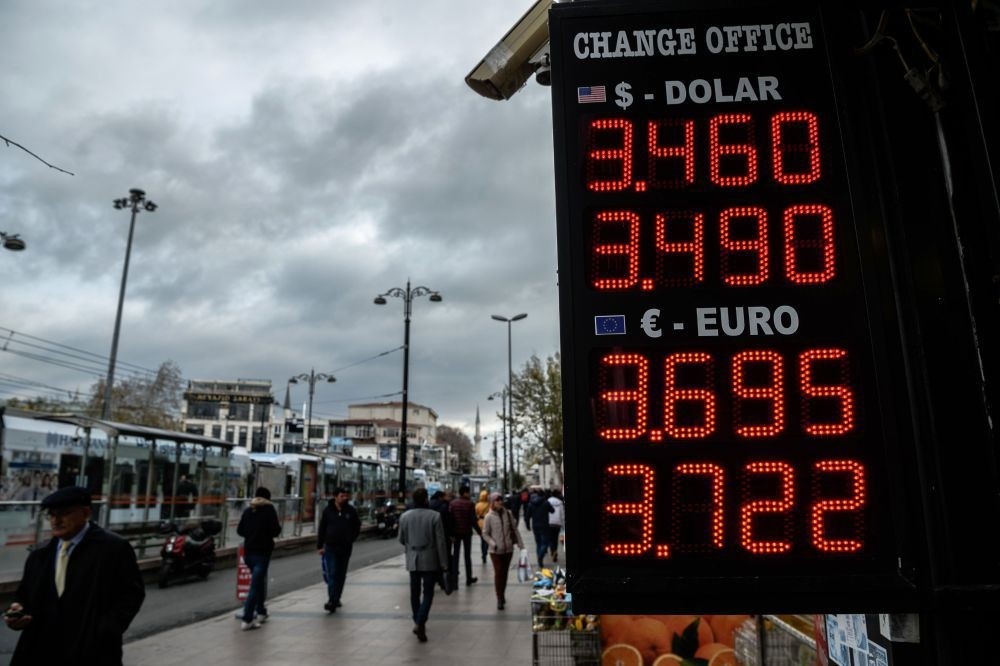 A man passes next to a money exchange office in Istanbul.
by Daily Sabah Dec 08, 2016 12:00 am
President Recep Tayyip Erdoğan's call to convert foreign currency savings to Turkish lira has gained support from public institutions and commercial entities.

On Friday, Erdoğan called on Turkish citizens to convert their "under-the-mattress" foreign currency savings into Turkish lira as well as Turkish commercial entities to use the local currency as a medium of exchange in economic transactions. On Sunday, he promoted the idea to use local currencies in trade activities with countries such as China, Russia and Iran. Showing his willingness to act on the idea, Prime Minister Binali Yıldırım paid all the expenses of his visit to Russia in rubles.

Upon Erdoğan's call to convert foreign currencies into lira and gold to boost the value of the lira and gold against the spiking dollar, various shopkeepers across Turkey came up with innovative incentives to urge people to exchange their foreign currencies from barbers offering a free hair cut to restaurant owners giving free meals, from fish-sellers giving away a kilo of anchovies to bakers offering free bread for one week. President Erdoğan's call has also secured a swift response from public institutions and commercial entities. Right after his call, Borsa Istanbul, (BIST) announced that it had converted all its cash reserves into Turkish lira and will keep them in lira deposits as of Friday.

Earlier yesterday, the Energy Market Regulatory Authority, which is responsible for regulating energy markets such as natural gas, LPG, electricity and petroleum, decided to use Turkish lira in natural gas distribution tenders. The statement by EMRA confirmed the latest decision supports President Erdoğan's call to use the lira instead of the dollar in public procurements and tenders. Within the framework of the decision, proposals for natural gas distribution tenders will be submitted in lira/kuruş instead of dollar/cent per kw/hour. As a speed action after the decision, the proposals for natural gas distribution tenders for Tunceli on Dec. 26 and for Doğubayazıt on Dec. 28 will be received in lira. In addition to EMRA's decision to support the Turkish lira, the Defense Industry Support Fund announced that it converted all its savings in foreign currency into lira earlier yesterday. The National Defense Ministry released a statement, saying, "The Defense Industry Support Fund, operated by the Undersecretariat of the Defense Industry, converted some $262.7 million and 31.3 million euros into lira as of yesterday." The written statement by the ministry cited President Erdoğan's call.

Turkish Airlines, Turkey's globally operating and star-alliance member airliner, announced that the company will receive Turkish liras for fees paid for umrah, a pilgrimage to Mecca, Saudi Arabia where the Kaaba - the sanctuary of Muslims - is located and can be undertaken any time of the year as opposed to the Hajj.

Previously, the airliner accepted umrah fees in dollars, paid for umrah visits from Turkey to Mecca. According to the statement released by Turkish Airlines' press department yesterday, the national airliner took the step to use lira for tax-included umrah visits from Turkey. The regulations to use lira in fine proceedings with regard to ticketing, change of tickets, returns and absence in flight despite bookings by passengers have been completed.

The Turkish Standard Institute (TSI), which is an independent public institution providing standards aimed at enabling industrialists to produce goods and services in compliance with legislation applicable in global markets, announced yesterday the institution exchanged all of its assets in foreign currency, converting them into Turkish lira. The written statement by TSI confirmed the "exchange your dollar," campaign organized by Turkish citizens as a bold reaction against the speculation and pressure on the national economy and the Turkish lira to effectively respond to President Erdoğan's call, still continues and the institution converted all its assets deposited in foreign currencies into lira as part of the said campaign.

The last installment of 4.5G to be paid in Turkish lira

As the support for President Erdoğan's call to boost the value of local currency spreads in waves, the operators winning the tender for IMT-Advanced authorization, which is publicly known as 4.5G, will pay their last installment in lira.

The value of the tender for IMT-Advanced authorization was organized by the Information and Communication Technologies Authority on Aug. 26, 2015 amounted to 4 billion euros, VAT included. Turkcell and Turk Telekom, Turkey's telecommunication majors, preferred to pay in installments while another GSM giant Vodafone made a clean payment. Turkcell and Türk Telekom are due to pay in total 657.1 million euros in lira in April 2017.

Football clubs to pay their players in local currency

Speaking at the Presidential Palace yesterday, President Erdoğan announced that football clubs also joined the supporters of the Turkish lira. "Our nation has responded to the call. Even sports clubs have joined in this business of boosting the value of our local currency. They say, "We are going to pay our players in Turkish lira," the president noted. Recently, Medipol Başakşehir, playing in the Spor Toto Super League, announced that the club will pay its players and all members of their technical staff in lira. Moreover, Adana Şakirpaşa Sports Club handball team, a club in the southern province of Adana, announced that it will pay monthly transfers fees of its foreign players in lira.
RELATED TOPICS