President Erdoğan: ‘I appreciate the mobilization against foreign currency' 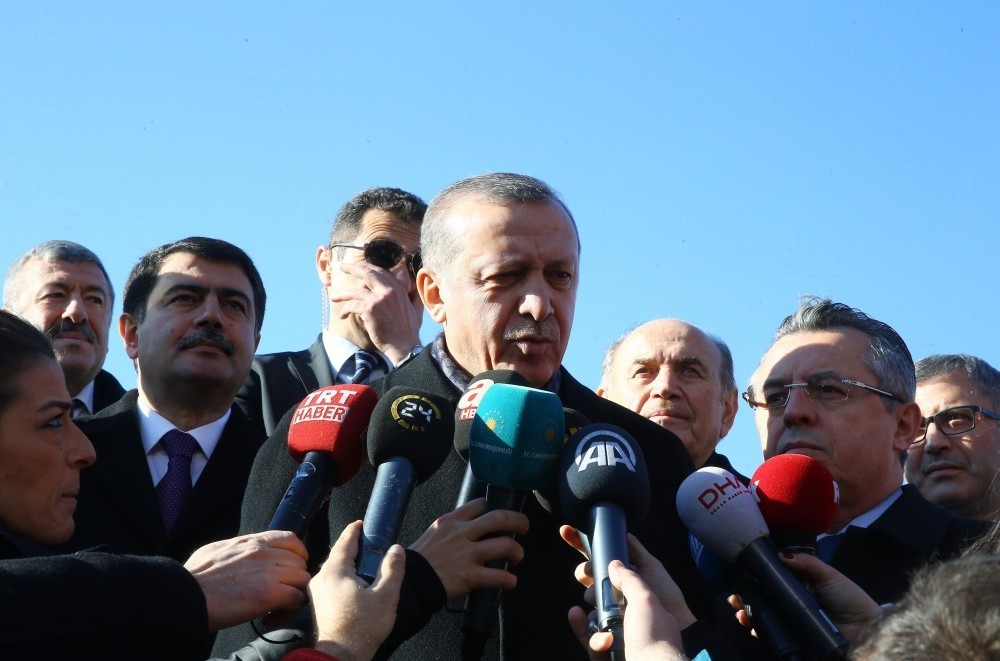 President Recep Tayyip Erdou011fan answers the questions of journalists on Friday.
by Daily Sabah with AA Dec 10, 2016 12:00 am

President Erdoğan's call continues to receive support both from Turkish citizens and Turkey's foreign trade partners, particularly Russia and China, while he urges citizens not to bow down to the interest rate lobby

President Recep Tayyip Erdogan expressed his appreciation for the people's involvement in the step taken for the transition from foreign currency to Turkish lira, and urged them to give more weight to the issue.

Appreciating the people's preference regarding the steps taken toward the transition from foreign currency to Turkish lira since last Friday and expressing his gratitude toward the people, Erdoğan said they should give more weight to the issue, and recalled Prime Minister Binali Yıldırım's earlier speech on Thursday about the government's promise to take steps in public-related purchases and bidding with the Turkish lira in case there is not an extraordinary situation.

The economy-related decisions were announced on Thursday aiming to relieve entrepreneurs and markets, Erdoğan told reporters on Friday. Touching on the importance of the decisions in terms of the Turkish Employment Agency (İŞKUR), Erdoğan said this nine-month period during which 500,000 people will be employed in the private sector and 100,000 in the public sector will be seized "wisely" by the private sector, stressing that it is a well-pointed step for this transition period.

Assessing the steps taken regarding the use of local currencies in foreign trade with Russia, Erdoğan said trade with local currency will ease the pressure of the foreign exchange. Recalling that he previously discussed the use of local currency in the import and export operations between the two countries with Russian President Vladimir Putin, Erdoğan said the trade volume with Russia, which previously reached as much as $35 billion, will be substantially relieved if the ruble and Turkish lira are used in commercial relations.

Pointing out that they also discussed this issue during talks with Iran, President Erdoğan suggested that this step is also likely to be taken with the Iranian Rial, which will be replaced by Tumen. "We again talked about these in the meeting with China. It is possible to spread them," Erdoğan said, underlining that by taking these steps in the countries with high trade volumes, it is possible to remove the exchange rate pressures on the local units.

Not bowing down to Interest rate lobby

Regarding the interest rates, President Erdoğan said Turkish people should not pay premiums especially to the interest rate lobby since it transforms the deposits of the public into income not through its own equity, but through people's money and later praises itself. Urging interest rate lobbies to give the gap between last year and this year's amounts to the people as loans with low interest rates, Erdoğan said when people turn these loans into investments, then these investments will be born out of zero and will be expanded, enabling employment, production and competition to increase. Erdoğan also noted that while the government and the Central Bank will be hopefully more sensitive to this issue, state and pubic banks should lead the way and set an example, stressing that along with this step Turkey will enter into a new investment mobilization.