Turks have exchanged $12B after Erdoğan's call 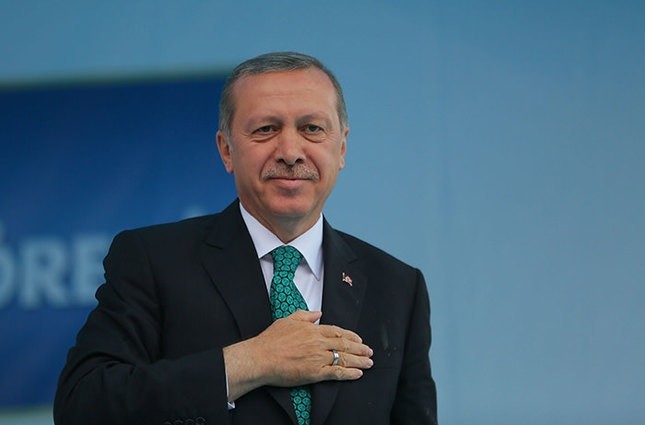 As Turkey gets closer to the 100th anniversary of the founding of the Republic, the country plans to revise its goals for 2023, with new targets to boost national income and foreign trade, President Recep Tayyip Erdoğan announces

On Saturday, the Foreign Economic Relations Board of Turkey (DEIK) held its 30th Ordinary General Assembly, where President Recep Tayyip Erdoğan, Economy Minister Nihat Zeybekçi and other sgave speeches. During his speech, President Erdoğan elaborated on a number of important issues, such as the mobilization against the volatility of foreign currency, which resulted in the conversion of some $12 billion into Turkish lira, the reduction of interest rates to boost and improve the investment environment, the increase in GDP growth and domestic income based on recent changes in GDP calculation methods and the revision of 2023 goals, including significant increases in domestic income and foreign trade volume.

At the beginning of the speech, the Erdoğan reiterated his call to citizens and businesspeople to use the Turkish lira following the attack through currency speculation on the economy and said: "I know that some of you have met these calls with irony. However, there is a truth we have experienced since the 1994 crisis." Noting that some are trying to manipulate the Turkish economy via currency speculation, which has no rational economic reason, President Erdoğan said the main goal is to pave the way for political operations. Erdoğan said to foil plots schemed against neighboring countries - Russia, China and Azerbaijan - steps will be taken by using local currencies and thus getting rid of currency pressures on imports and exports.

Erdoğan stressed that Turkey experienced a small shrinkage only in 2009 due completely to the global economic crisis, and recalled that every attack on Turkey for the last three-and-a-half years has been carried out in an attempt to cause an economic crisis. He said: "Remember the Gezi events; they were urging people 'not to consume and to let the economy stop.' I know and you also know that businessmen, who have carried out important projects in our country, were targeted by the law enforcement/jurisdiction coup attempt that took place between Dec. 17-25." Erdoğan stated that the main reason behind the campaigns conducted against Turkey is to undermine the country's exports and tourism, and added that if millions of citizens had not protected the economy by exchanging $12 billion in the days following the July 15 coup attempt, the same game would have also been played there. "However, these folks are not ordinary people. They immediately answered my call, exchanged everything they got and released it to the market," Erdoğan said.

Suggesting that they are obliged to put forward a determined and patient stance against fluctuations in the exchange rate just like the nation did on July 15 and just like the measures they have taken in previous attacks, President Erdoğan said: "That's why I tell you 'to invest, use the Turkish lira, produce, export and provide employment.' Because these are the antidotes for the poison they tried to give to us."

Erdoğan underlined that interest rates must fall, including the public sector, to pave the way for entrepreneurs whose investments are necessary for employment, production and competition.

The meaning of national mobilization

President Erdoğan said the Turkish government has provided much additional support, including tax and registry amnesty and loan facilities to the business world, tradesmen and craftsmen and will continue doing so, noting that the only expectation from the business world is acceleration of the economy and movement in the market. "Because the most important reason for the troubles is that everyone is waiting," Erdoğan said, stressing that that's why he called for "national mobilization." "What I call 'national mobilization' does not mean 'get a gun and go out on the street.' This is the 'national mobilization.' The attacks on the economy, including the speculation in foreign exchange, feed and support this," Erdoğan said. "Today, we are obliged to demonstrate the same determination in the face of attacks on our economy as we have shown in the struggle with terrorist organizations within and outside our borders."

'No measurement, no governance'

Saying, "We have to announce today the importance of knowing the truth," Erdoğan declared that current economic indicators were corrected backwards and re-published accordingly. He also underscored that the gross national product (GDP), which previously reached $800 billion with the new method, has been revised to $949 billion and the national income per person that had been $10,800 has been revised to $12,500. Erdoğan added that Turkey's growth rate, which has been 4.7 percent since 2003, had similarly been revised to 5.9 percent and that accordingly, Turkey's national income is ranked third among the countries with national incomes over $100 billion, in this period, following Qatar and China, in terms of the growth rate between 2010 and 2015.

"We were even in first place on the 2013 list in this respect. Considering all countries in the same period with the new method, Turkey's place in growth rose to 12th from 51st," Erdoğan added.

Suggesting that the statistical updates made in the light of these changes will ensure that the current situation is seen more accurately and facilitates more accurate planning for the future, Erdoğan said: "The new data does not make us bigger than we are, but to the contrary, it allows us to weigh our true situation more accurately. By using statistical methods, we are now able to identify the things that we are already aware of through our personal observations. There is the principle, 'you cannot rule if you cannot measure.' We also have to do our measurements correctly so that we have healthy management."

Erdoğan stated that in this respect, objections expressed concerning the new statistical method in today's general assembly are unfounded and everyone should respect science and truth, adding that Europe and all of the others adopted this system before Turkey.

Speaking at the same assembly, Economy Minister Nihat Zeybekci said that 2017 will be a year in which export mobilization will resume and he stressed that with an increase of 3 percent in October and the increase of 7-8 percent in November and hopefully, an approximate 10 percent increase in exports in December, 2017 will be the beginning of Turkey's journey towards the 2023 targets.

pointing to state-private sector unity, Zeybekci said the most effective way to establish Turkey's foreign trade objectives and take action in line with this goal had been realized with the new DEİK structure, and added that they are pleased to receive the positive results from the cooperation between DEİK, the Economy Ministry and the founders of Turkey's leading non-governmental organizations (NGOs).

Zeybekci suggested that while exports around the world decreased in 2016, Turkey had maintained 2015 levels in 2016. Hoping that exports will increase in 2017, he recalled that the Preferential Trade Agreement signed with Iran by order of President Erdoğan increased exports by 39.5 percent and free trade agreement (FTA) talks conducted with Russia again via instructions from the president will bear fruit in the fields of services and investment in 2017.

Zeybekçi noted that the FTA with Bosnia and Serbia had been expanded to include services and public procurements and hoped that the said agreement will be signed in spring during the summit with the presidents of Serbia, Bosnia-Herzegovina and Turkey.

Recalling that Eximbank was restructured, Zeybekçi said the total annual loan of around $45 billion would exceed $100 billion as soon as possible. Zeybekci also said that the Turkish Eximbank will give loans in every place where goods are sold abroad at the same rate as the rate given by German and British Eximbank, and added that if a contractor gets a tender from abroad, they can have a loan facility with zero interest rates for the material that they procure from Turkey for the tender.

The new corporate identity of DEIK

DEİK President Ömer Vardan introduced the new logo, stating that they have brought a logo and a new corporate identity befitting the current pace of the organisation, which has been working hard to strengthen the Turkish business world by maintaining the years of experience and awareness.

Stating that DEİK was ready to shape the future of foreign economic relations with a renewed strategy, Vardan said the organization completed its structuring and renovated its corporate identity, focusing all their energy on the future and the visions of 2023, 2053 and 2071. Vardan also pointed out that DEİK aims to become an institution that produces information, makes policies and takes action in foreign economic relations in line with Turkey's vision to become center for consultation with a solid and vast network and to add the concept of "Business Councils" as their backbone to the knowledge of the global trade system and make it supportable.

Vardan also said that in this context, they will ensure the establishment of a business council in countries around the world where Turkey has an embassy and that with the exception of 134 already-existing business councils, they will try to complete the missing ones and establish trade and investment relationships with almost every country in the world. "In this sense, we intend to strengthen our country's economic ties around the world through our know-how and effective studies of 'Business Diplomacy'," Vardan added.

Highlighting that 134 business councils operating in six regions and various sectors have been doing business all over the world, Vardan said that the business councils have held some 700 executive board meetings in two years, reaching the highest number to date.
RELATED TOPICS