Around 10-15 pct of foreign trade to be in local currencies: Economy minister 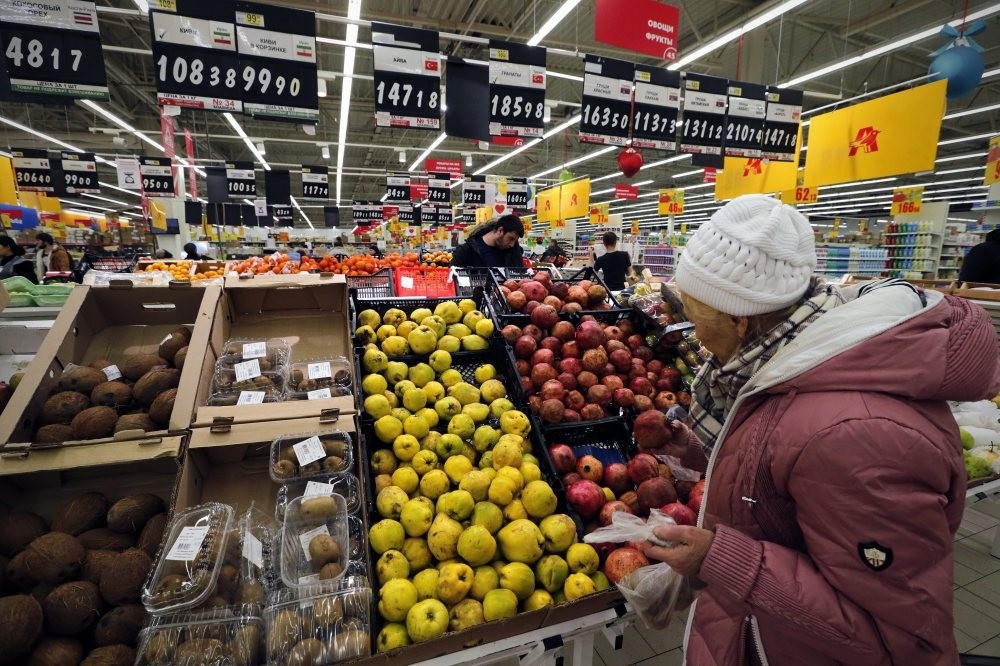 A Russian woman chooses fruits imported from Turkey at a supermarket.
by Daily Sabah with AA
Jan 03, 2017 12:00 am

Aiming to carry out trade transactions in local currencies with its trading partners, and already having taken initiatives to that end, Turkey is determined to use local currencies in trade as the medium of exchange

President Recep Tayyip Erdoğan urged Turkey's trade partners in early December, especially Russia, China, and Iran to carry out trade deals in national currencies. His call received a prompt response from Russia, as the Russian Central Bank indicated that there were no legal or technical obstacles in using local currencies as a medium of exchange in commercial transactions between Turkey and Russia.

As part of the initiatives, Economy Minister Nihat Zeybekçi recently announced that technical procedures were underway in regards to trade with Russia and Iran using national currencies and Turkey was aiming to realize around 10-15 percent of its total foreign trade, worth almost $430 billion, in national currencies. Minister Zeybekçi was talking to members of the media where he answered questions about current items on the agenda.

Asked about the latest development regarding fresh fruit and vegetable exports to Russia, Zeybekci confirmed that he also heard rumors suggesting that the issue would be picked up this year. Pointing out that this would be one of the first issues that they would want address in the new year, Zeybekçi said, "Russia and Turkey have mutual interests. We will discuss this in detail. I hope we will get results. However, we are also disturbed by the prolongation of the subject."

Replying to a question on the latest state of affairs with Iran, Zeybekçi said they were supposed to make a statement about extending the Preferential Trade Agreement from 265 items to 400 last week, but due to the cancellation of the Iranian prime minister's visit to Turkey, the agreement could not be signed. "But we are in consensus with the relevant Iranian minister on this issue. We think we will finalize it within a very short final meeting," Zeybekçi said, adding that the agreement will be put into effect as soon as it is finalized.

He noted that in terms of the trade with Russia and Iran in local currencies, everything has progressed positively in the technical sense. "We want to continue this by expanding its scope. As Turkey, we aim to be able to carry out around 10-15 percent of our total foreign trade, worth some $430 billion, using the national currencies. This is of high important to us," he said.

With regards to trade in local currencies, Energy and Natural Resources Minister Berat Albayrak had given an important message in a speech during budget talks at the Turkish Grand National Assembly in December. He said Turkey had entered a "new era" in its energy policy, in which it will use Turkish lira in future trade, especially with countries it shares a large volume in energy transactions.

Furthermore, President Erdoğan's proposal to use the national currency in foreign trade saw the Central Bank of the Republic of Turkey complete its first currency-swap transaction with the People's Bank of China (PBOC). President Erdoğan's proposal, which had been on the agenda for a long time, has garnered support from all segments of society, as the first currency exchange transaction between the Central Bank and the PBOC took place on Nov. 30, 2016.