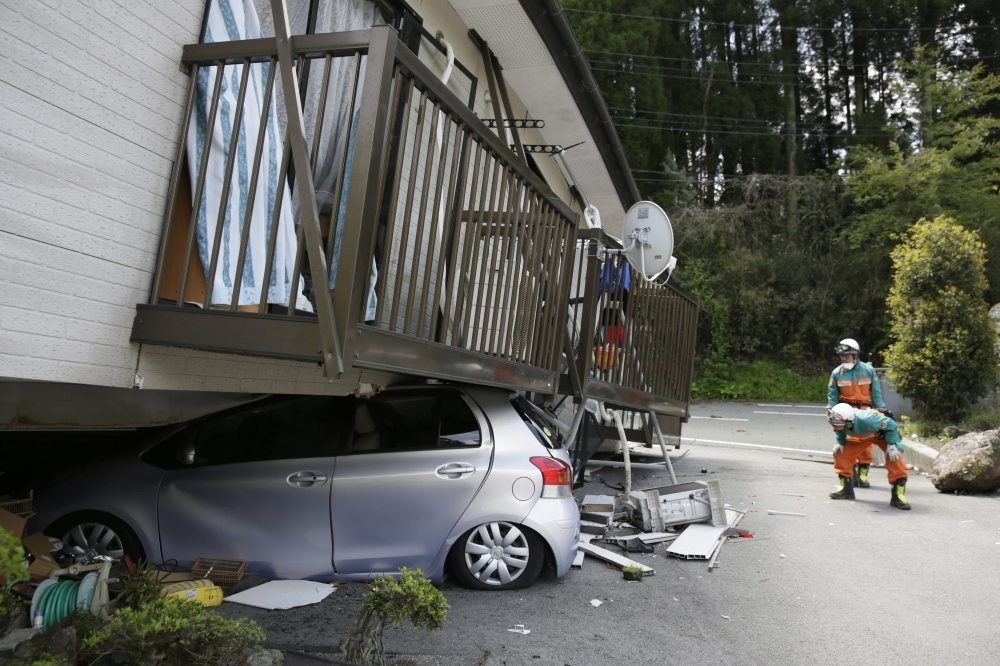 At least 40 people were killed and over 1,000 injured in two strong earthquakes that hit southwestern Japan on April 14 and 16, 2016. The two disasters have displaced over 90,000 people regionwide.
by Associated Press
Jan 05, 2017 12:00 am
Last year saw the highest costs from natural disasters since 2012, with a pair of earthquakes in Japan in April accounting for the heaviest losses, a leading insurer said yesterday. Losses from natural disasters worldwide totaled $175 billion last year, some $50 billion of which was covered by insurance, Munich Re said in an annual survey . The earthquakes on Japan's southern Kyushu island caused $31 billion worth of damage, with $6 billion of the costs covered by insurance. Floods in China in June and July caused $20 billion in costs, only $300 million of which was insured. The third-costliest disaster was Hurricane Matthew, which hit the Caribbean and the eastern United States in August. It incurred losses totaling $10.2 billion, of which $3.8 billion was covered by insurance.

In 2015, when the El Nino weather phenomenon reduced hurricane activity in the North Atlantic, global natural disaster losses totaled $103 billion, $32 billion of that sum insured. However, the number of people killed dropped to 8,700 last year from 25,400 the previous year. Last year's losses were "in the mid-range" after three years of relatively low costs, Munich Re board member Torsten Jeworrek said in a statement. He stressed that "losses in a single year are obviously random and cannot be seen as a trend."The company said there was an "exceptional" number of floods, which accounted for 34 percent of overall losses, compared with an average of 21 percent over the past decade.

Those included $6 billion in losses, about half of them insured, resulting from storms and flooding in Europe -particularly in Germany and the Paris region -in May and June. Jeworrek said that "the high percentage of uninsured losses, especially in emerging markets and developing countries, remains a concern."