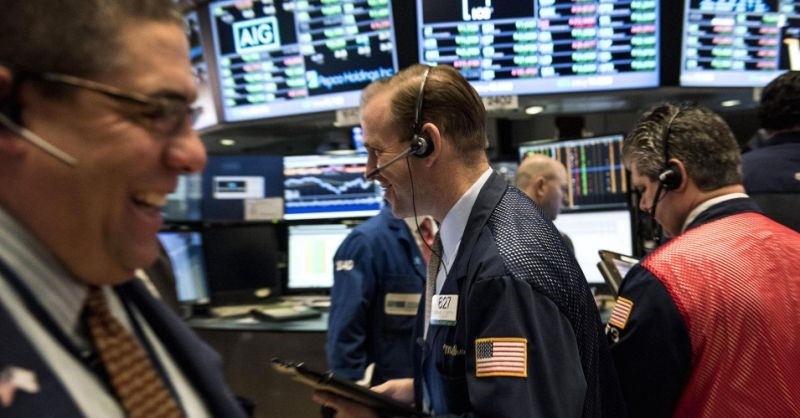 As minutes of the Fed's December meeting showed that FED policymakers are inclined to introduce gradual interest rate hikes this year and warn of inflationary risks, global stocks and commodity prices surged

Stock indexes around the world gained on Wednesday, bolstered by upbeat global economic data and minutes from the Federal Reserve's December meeting, which showed policymakers thought the U.S. economy could grow more quickly because of fiscal stimulus under the incoming Trump administration.

The dollar retreated from a 14-year high against a basket of currencies, briefly hitting a session low, while U.S. Treasury debt yields were flat to slightly lower in choppy trading after the release of the minutes.

The minutes showed how broadly views within the Fed are shifting in response to U.S. President-elect Donald Trump's promises of tax cuts, infrastructure spending and deregulation.

MSCI's world index, which tracks shares in 46 countries, rose 0.89 percent to a three-week high and was last up 0.85 percent. The index found support from a batch of rosy economic reports from Europe, and got a boost from a second day of strength in U.S. stocks.

"Clearly, some of the members on the (Fed policy) committee are taking a look at proposed fiscal changes, whether that's tax cuts or infrastructure spending," said Chris Zaccarelli, Chief Investment Officer for Cornerstone Financial Partners. U.S. stocks have surged over the past two months on expectations that Trump will stimulate the economy with tax cuts and infrastructure spending, and eliminate regulations in the financial industry. "It's confirmation of what people were already expecting," Zaccarelli said.

European shares edged down from a one-year high with retailers in focus after Next cut its profit guidance and cautioned on future trade. Europe's broad FTSEurofirst 300 index closed little changed at 1,443.80.

The dollar fell against the euro and yen on Wednesday, backing off a 14-year high against a basket of currencies, with investors cautious about increasing bets on the greenback without fresh clues on the U.S. economy and the timing of interest rate increases.

The Fed minutes which warned of growing inflationary risks from Trump's proposed fiscal stimulus measures undercut the dollar and pushed the euro to $1.0499, its highest level of the day. But the euro retraced those gains a bit as investors unpacked the minutes.

"It's really a mixed bag I read from the minutes because on the one hand the Fed sounded optimistic for the economy, but on the other hand the minutes took a swipe at the dollar's strength," said Joe Manimbo, senior market analyst at Western Union Business Solutions in Washington.

Meanwhile, oil prices rose on expectations that U.S. crude inventories are falling and signs that oil producers will stick to agreed output cuts that took effect this week.

U.S. Treasury debt yields were flat to slightly lower in choppy trading as the Fed minutes struck a more uncertain tone than the bond market expected, especially with respect to the new administration's fiscal policies. Yields on U.S. 10-year notes and 30-year bonds hit session lows following the release of the minutes. The benchmark U.S. 10-year note was down 6/32 in price to yield 2.434 percent, compared with 2.454 percent late on Tuesday.

Gold touched a near-four week high helped by the retreating dollar and increased demand from major consumers China and India. Spot gold prices were up 0.47 percent at $1,164.28.