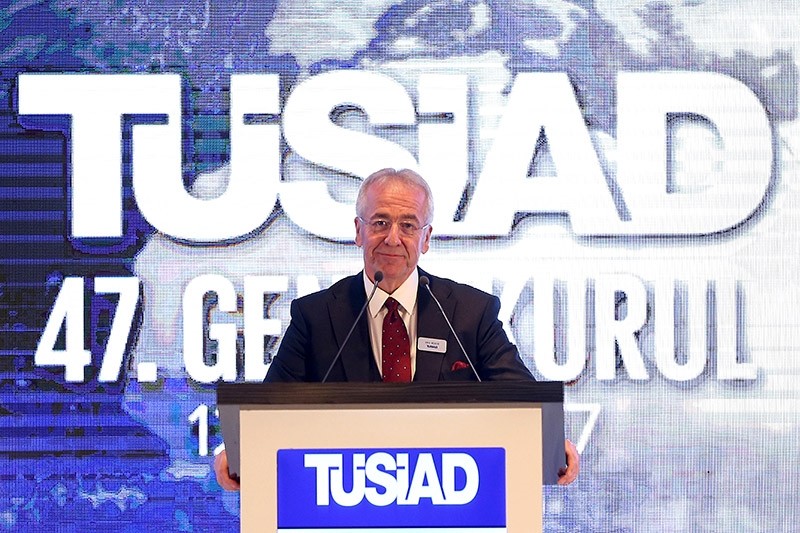 The Turkish Industrialists and Businessmen Association (TÜSİAD) has elected businessman Erol Bilecik as the new president of Turkey's largest business organization at its 47th general assembly on Thursday.

Having received 144 out of 146 delegates' votes, Bilecik was the only candidate to replace incumbent President Cansen Başaran Symes, who was elected to the post at the previous general assembly in Jan. 2015.

55-year-old Bilecik is the founder of Index Computer, one of the oldest and leading information technology firms in Turkey. Index Group currently employs more than 600 people in group companies.

Making a statement following the election, Bilecik said: "It is a great honor and pride for me to work with our colleagues in the upcoming period with the TÜSİAD Board of Directors, which I am very happy and proud of being a part of."

Recalling that 2016 witnessed major and troubling developments both in Turkey and around the world, Bilecik said the country entered 2017 troubled with the same issues from the very beginning of the year with a major terrorist attack.

"It is impossible to deny that we are in a difficult period," Bilecik said, highlighting that given the 46-year history of TÜSİAD, it has taken the initiative, established sensitive dialogues and powerfully reflected the voice of the business world at all important turning points of the country and in every situation, showing its influence directly or indirectly.

Noting that they are not worried about the tough period ahead, but on the contrary feel motivated to work harder in the light of the entity's traditional mission, Bilecik said: "Because, for a stronger Turkey in global competition, we have to run in the fields, though we start by crawling we speed up until we run. We are already conscious of this [success]." Bilecik also underlined that Turkey can only be a country with high competitiveness in the world if it is a society of technological, scientific and artistic creativity, with democracy, law and the greatest freedoms, pledging that they will continue to work with determination in this direction.

Suggesting that TÜSİAD will prioritize and support all positive steps towards solving the structural problems of the country in accordance with their vision, Bilecik stated that today, as in the past, the association will continue to be a strong voice of the business world in Turkey, Europe and the world.

Bilecik noted that they wanted to see more young leaders. Stressing that the past year's treacherous coup attempt showed how important it is to raise free individuals in terms of thought and will, Bilecik said,"We have always embraced the concept of management that gives priority to diversity, youth, and women by doing our part in this field, and we will continue to adopt it from now on."

Bilecik commented that he is a person who has been able to feed his belief in the human abundance of these lands with what he has experienced in the country and that he personally sees this as a great chance, and knows very well what the people of Turkey can achieve when they receive opportunities, support, education and self-confidence with the power of science and reason. "You can be sure that in the new period we will work very hard alongside my colleagues," Bilecik added.

Observing that Turkey has always been watched with envy by countries in the region, with its prosperity and success in the global arena, Bilecik also stressed that at the core of this success undoubtedly lies the commitment to republican values and the understanding of democracy. He emphasized that TÜSİAD has always protected the values and achievements of the Republic of Turkey founded by Atatürk, saying, "We will be the pioneers of the common efforts of our business world in the name of a bigger, stronger and happier Turkey that will rise on the basis of the same gains in the coming periods."

​In response to a reporter's question implying that he is assuming a tough position in a tougher period, Bilecik said: "No duty is really that hard."

Rahmi Koç, honorary chairman of TÜSİAD and Turkey's largest conglomerate Koç Holding, wished success to the new administration as he cast his vote.

The commercial activities of 4,000 TÜSİAD members compose 80 percent of the foreign trade in Turkey.