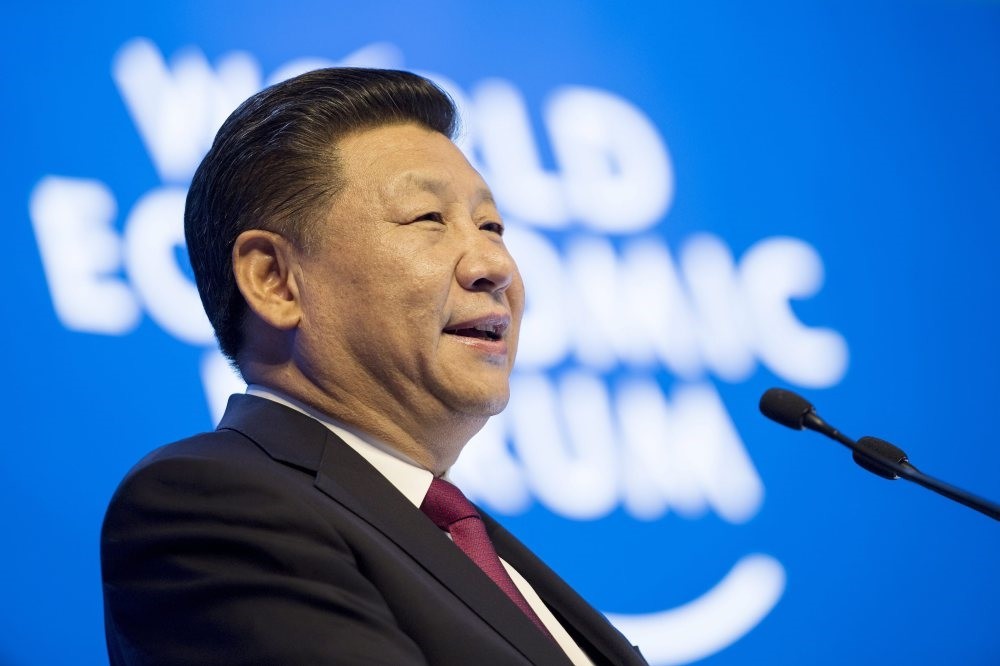 China's President Xi Jinping delivers a speech in the Congress Hall on day one of the 47th Annual Meeting of the World Economic Forum (WEF) in Davos, Switzerland.
by Associated Press Jan 18, 2017 12:00 am

As the world engages in a heated discussion on globalization amid protectionist trade discourses, China's Xi, who is the first Chinese president to attend the World Economic Forum, highlights there is no winner in a trade war

Focusing on the "double-edged" impact of economic globalization in a speech that alluded variously to Charles Dickens, Greek mythology and Chinese proverbs, the leader of the world's No. 2 economy stressed the need for stability, new vision and perspective that has left many citizens disenfranchised and worried about the future.

His visit to the World Economic Forum in Davos, Switzerland, is the first by a Chinese president and appears timed to position the country as a leader on the global stage as Western countries increasingly look inward. "We must remain committed to promoting free trade and investment through opening up and say no to protectionism," Xi told an opening meeting of the WEF. "Pursuing protectionism is like locking oneself in a dark room. While wind and rain may be kept outside, so are light and air." "No one will emerge as a winner in a trade war," he said.

During his campaign, Trump promised to raise tariffs on Chinese goods and declare Beijing guilty of keeping its currency artificially low. That would be a first step toward imposing sanctions. But in fact, for the past couple of years China has been intervening in markets to prop up its currency, not push it lower. "China has no intention to boost its trade competitiveness by devaluing the renminbi, still less will it launch a currency war," Xi said yesterday.

Xi made no direct reference to Trump, but his vocal support for free trade and bashing of protectionism could appear rich to other Western countries who have grumbled about commercial restrictions in China that clash with the public assertions from officials.

Foreign companies complain Beijing is reducing access to its markets for electric cars, computer security technology and other promising fields or pressing them to give know-how to potential Chinese competitors. Some say they are blocked from acquiring assets in China, just as Chinese companies have been on a foreign buying spree.

"The political leadership of China never ceases to assure us that further opening toward foreign investment ... is a priority," Germany's ambassador to China, Michael Clauss, said this week. "However, many companies keep telling us that their difficulties in these areas have increased." "It often appears that somewhere down the line, political assurances of equal treatment give way to protectionist tendencies," he said in a statement.

Aside from the economy, Xi stepped into other areas of international consensus, calling the Paris accord to fight climate change a "hard-won achievement," and urging signatories to "stick to it instead of walking away from it as this is a responsibility we must assume for future generations."

Trump, who has called climate change a Chinese hoax, has raised speculation that he might pull the U.S. out.

The visit by Xi caps the largest-ever Chinese delegation to Davos, including over 100 officials and scores of business executives and embodying a tectonic shift at an event that started nearly a half-century ago among Europeans and Americans. He is the first Chinese head of state to visit Davos since the annual conferences began in 1971.

Speaking Monday, WEF Founder Klaus Schwab said this year's event is "not just a Western meeting." One-third of the participants are from the emerging world -including the largest-ever delegations from China and India, Schwab said.

The bumpy run-up to the Trump administration - Trump's poll numbers are low for an incoming president - has given the Chinese leader a convenient opportunity to advance his goal of giving his country a more assertive leadership role on the world stage.

China previously sought to capture the mantle as a supporter of world trade after Trump said he would pull the United States out of the 12-nation Trans-Pacific Partnership trade deal championed by President Barack Obama.

Xi cast the world economy as adrift, saying it lacked a "driving force" with inadequate global governance and unequal benefits that have widened the gulf between rich and poor. "This is the biggest challenge in the world today," he said.

He called for a "new growth model" that takes into account climate change, aging populations and increased automation, and said countries that face difficulties should not "lose confidence or run away from our responsibility . instead we should join hands."

Xi hit hard on the metaphor of the world economy as an "ocean," saying countries "must have courage to swim in the global market." "We should not develop a habit of retreating to the harbor whenever encountering the storm, for this will never get us to the other shore of the ocean," he said.

Mainstream Western leaders have been grappling with populist movements at home, including the one that helped undergird Trump's election victory. His transition team has one top adviser, Anthony Scaramucci, at the forum ahead of Friday's presidential inauguration.
RELATED TOPICS