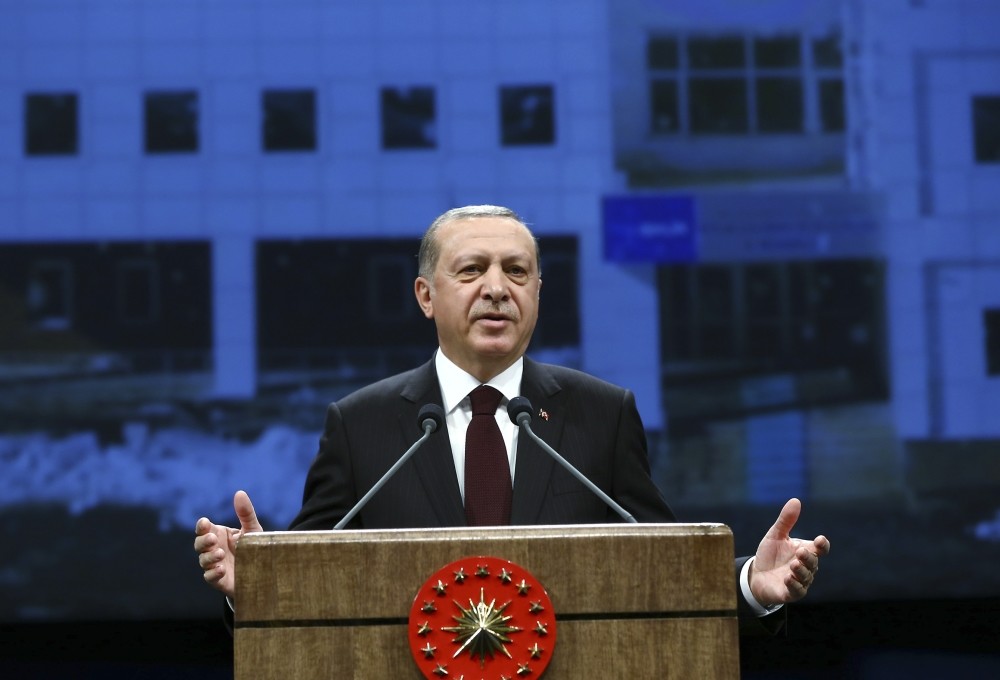 As the currency volatility still remains an issue to be controlled, President Recep Tayyip Erdoğan convened major Turkish economy bureaucrats on late Monday. Determined to fight back against speculation-driven volatility, as politicians and experts believe, Turkey will stabilize the economy through reforms and measures, including foreign trade in local currencies

President Recep Tayyip Erdoğan Tuesday said the economy was being used as a weapon to attack Turkey and urged financial institutions, particularly banks, to open the credit flow to facilitate investments while condemning those who play with money and engage in "economic terrorism." The president was speaking at an opening ceremony of the Social Security Institution's (SGK) Service Buildings, completed by the Labor and Social Security Ministry in the capital's Beştepe district. In his speech, Erdoğan highlighted the developments and benefits of the healthcare institution. He also focused on the recent economic situation, and shared details from Monday's economic summit, held at the Presidential Palace, that discussed investments and the ongoing currency volatility.

The meeting was attended by Prime Minister Binali Yıldırım as well as related ministers and bureaucrats. Elaborating on the transformative changes in Turkey's healthcare system, which facilitates each and every Turkish citizen's access to healthcare through state-funded investments, the president said Monday's meeting assessed that the structural transformation of the Turkish economy over the last 14 years and the structural reforms are necessary for the country to achieve its 2023 goals.

President Erdoğan criticized the calls to keep money in deposit accounts, saying, "When someone calls the citizens to keep their money in deposit accounts, they are asking people to give their money to financial institutions, without allowing it to be used for investments in the real economy. It is the owners of those financial institutions who laugh all the way to the bank."

President Erdoğan said owners in the finance sector might face the government unless they turn on credit taps necessary for entrepreneurs and investors in this country.

Pointing out that investors should be provided with credits to expand their investments or get into new ones, which in return will boost employment, Erdoğan suggested, when these credit taps are opened, they should not be given out with high interest rates, but the opposite, in order to increase competitiveness.

Accusing those who manipulate money for "economic terrorism," Erdoğan said no one could deny the fact that the recent surge in the currency exchange is not based on rational factors, but aimed at slowing down the Turkish economy by upsetting the markets.

He had previously called those who play with money and keep foreign currency "economic terrorists," for their roles in economic attacks through speculations. He said Turkey will fend off these attacks with more reforms that will improve the investment environment and boost investor confidence.

Central Bank to take necessary measuresMeanwhile, Prime Minister Binali Yıldırım, talking to the media at the Central Executive Board (MYK) meeting of the Justice and Development Party (AK Party) on Monday, indicated that the Central Bank of the Republic of Turkey (CBRT) would continue with its moves.

"The structure of the Turkish economy is strong, widespread fluctuations are temporary and their impacts will be limited. The government will continue to take measures to meet the needs of the real sector," he said.

Commenting on the CBRT's probable moves, Yıldırım said, "The measures to be taken by the Central Bank, within the framework of its authorities and the applications it has to carry out, will continue. Since the CBRT is independent, it would be wrong to for me to explain its decision. It would not be correct to make a statement on behalf of the Central Bank."

Turkish lira volatility major subject at economic summitPresident Recep Tayyip Erdoğan on Monday held a summit with the country's top economic officials, including ministers, senior civil servants and the governor of the Central Bank to evaluate recent developments in the economy.

The main issue on the meeting's agenda was the rising exchange rates where probable measures against it were also discussed. Short, medium and long-term measures were also discussed one by one to avoid artificial swelling in the exchange rates and make the economy more durable. Additionally, steps taken by financial institutions, especially the Central Bank, were evaluated in order to ensure stability in the short-term.

Foreign trade in local currencyIn addition, state-guaranteed credit support for exporters affected by the exchange rates fluctuation and consolidation related to employment were among the other issues discussed at the summit.

The meeting, which stressed that economic attacks could be opposed by an offensive strategy rather than a defensive one, also evaluated the possibilities of import-export using domestic currency. It particularly weighed up the steps regarding trade with Russia, China and Iran using local currencies.

Moreover, it emphasized on using local currencies as a medium of exchange in trade transactions which would reduce the exchange rate pressure. It was also stated that the search for newer export markets should be accelerated.

The summit also underscored that it was important to send global investors a message that Turkey is safe and profitable as well as discussed the current incentives and facilities for foreign investors.
RELATED TOPICS