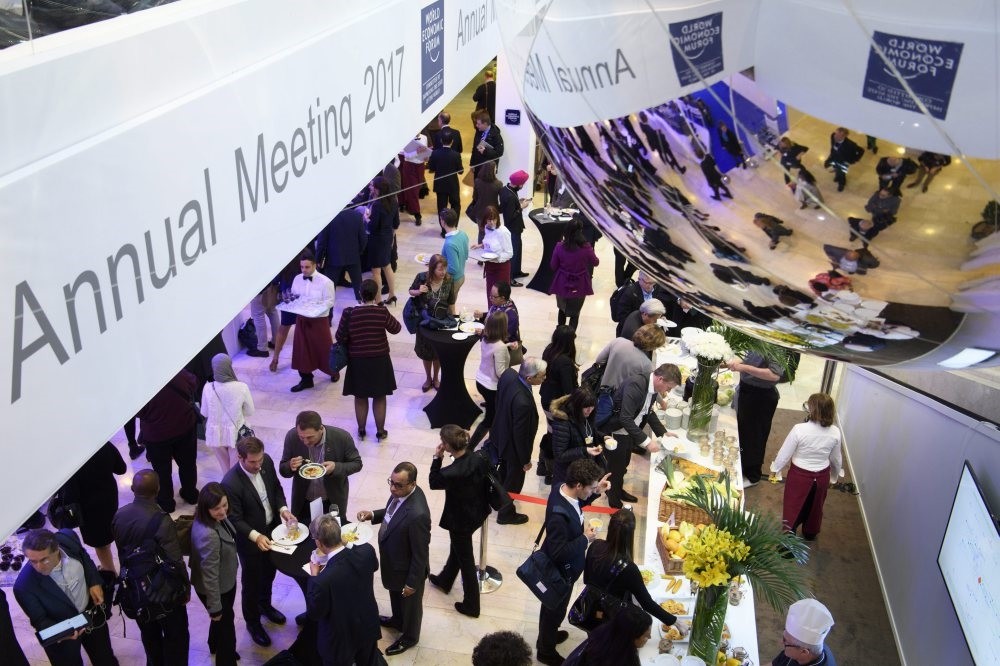 As the global leaders and elite meet in Swiss Alps, the worry about the globalization because of the possible trade war flared by the protectionist discourses haunt the meetings.
by Jan 21, 2017 12:00 am

The anxiety about protectionism casts a shadow over the Davos conference, where world leaders and elites conveyed messages to foster global trade against the protectionist discourse of U.S. president Donald Trump as he prepared for his inauguration on the other side of the Atlantic

Globalisation is good. That's the message leaders of developing countries want to send from the Davos forum to U.S. President-elect Donald Trump, who takes office on Friday.

Any return to protectionism, they fear, could bring the sky down on decades of trade-based economic growth that has lifted countless millions out of poverty. And for all the problems of blue-collar workers, globalisation has helped to achieve low inflation and low unemployment for Americans too, they argue.

Elected on an anti-immigration, protectionist platform, Trump has already caused ructions on the financial markets of many developing countries with threats to scrap trade agreements and impose "a very big border tax" on some imports.

That message has resonated especially in Mexico due to fears that U.S. companies producing goods there for export will face pressure to withdraw, potentially costing hundreds of thousands of jobs and billions of dollars in export revenue.

Mexican policymakers were not in evidence at Davos this year, perhaps kept at home as they battle to steady the peso which has fallen to record lows amid the Trump threats. But there were plenty of others at hand to sound the alarm.

"The African continent's position is: don't damage trade," South African finance minister Pravin Gordhan said during a panel discussion. "Don't damage the growth potential in developing countries which is crucial to inclusivity. These are the expectations the new administration needs to hear."

Many emerging economies have been transformed by a three-decade long global trade boom, unleashed by China's ascent and "offshoring", as Western companies flocked to produce goods for export in lower-wage countries.

Some of that impulse has ebbed. Sluggish economies have created protectionist pressures in the West while automation has eroded the wage competitiveness of poorer countries. World trade volumes grew last year by 1.2 percent, the third slowest rate in 30 years, United Nations data showed this week.

Trump's policies could reverse some long-standing trends. Globalisation - as the explosion in cross-border investment, trade and labour movement is termed - pushed capital into the developing world, creating growth and jobs.

But since the 2008 global financial crisis, cross-border capital flows are down 60 percent from their peaks, coinciding with an ebbing of globalisation, according to UBS estimates.

"My greatest fear is that the policies the U.S. may put in place will push emerging markets into recession," Kenyan central bank governor Patrick Njoroge said. "That would be like the sky falling on our heads."

Njoroge quoted from a 17th century work by English poet John Donne to make his point - that Trump needs to realise the U.S. economy does not function in isolation, and would suffer if emerging economies were seriously damaged.

"I'd like to remind him of what John Donne said - no man is an island," Njoroge told Reuters. "And the U.S. is not an island."

The most vigorous defence of globalisation and trade came from Chinese President Xi Jinping. He likened protectionism to "locking oneself in a dark room" and warned governments not to prioritise their own development at others' expense.

China has arguably been the main winner from globalisation, becoming the world's biggest export economy. But that came partly at the expense of U.S. workers, with almost a third ofits manufacturing jobs estimated lost from 2000 to 2010.

It was unsurprising therefore that Trump's promises to "bring jobs back" resonated among blue-collar voters, even though overall U.S. unemployment has tumbled under outgoing President Barack Obama to 4.7 percent.

Trade was not a one-way street, the leaders at Davos said, noting benefits to Western consumers too.

"The bottom line is the low level of unemployment in the United States and the whole population is taking advantage of lower prices," Brazilian finance minister Henrique Meirelles said.

"Having said that, there is a group of people who are not receiving the benefits of globalisation and that's a problem to be dealt with by those governments in terms of compensation or (job) training or creating safety nets," Meirelles added.

Investors contrast the lurch toward protectionism in the United States and Europe with that of Latin America where two of the biggest economies, Argentina and Brazil, are opening up under sweeping reforms.

Argentine Treasury Minister Nicolas Dujovne was keen to highlight lessons learned from a decade of populism which battered his country's economy and raised poverty.

"The experiment of trying to avoid competition, avoid the process of openness was not good for Argentina," he said at a panel discussion.

Commerce aside, emerging market leaders in Davos also called on Trump to maintain America's leadership role in security and politics. Trump has stirred unease in Europe, for instance, by calling the NATO alliance "obsolete".

"We are hoping the U.S. will continue to be engaged with the rest of the world in terms of combating terrorism and extremism," Turkey's deputy prime minister Mehmet Simsek said. And Ukraine's President Petro Poroshenko, amid fears in Kiev that Trump will backtrack on U.S. support in its dispute with Russia, urged Washington to maintain trans-Atlantic unity. "America should be great again," he said, borrowing from Trump's campaign slogan.