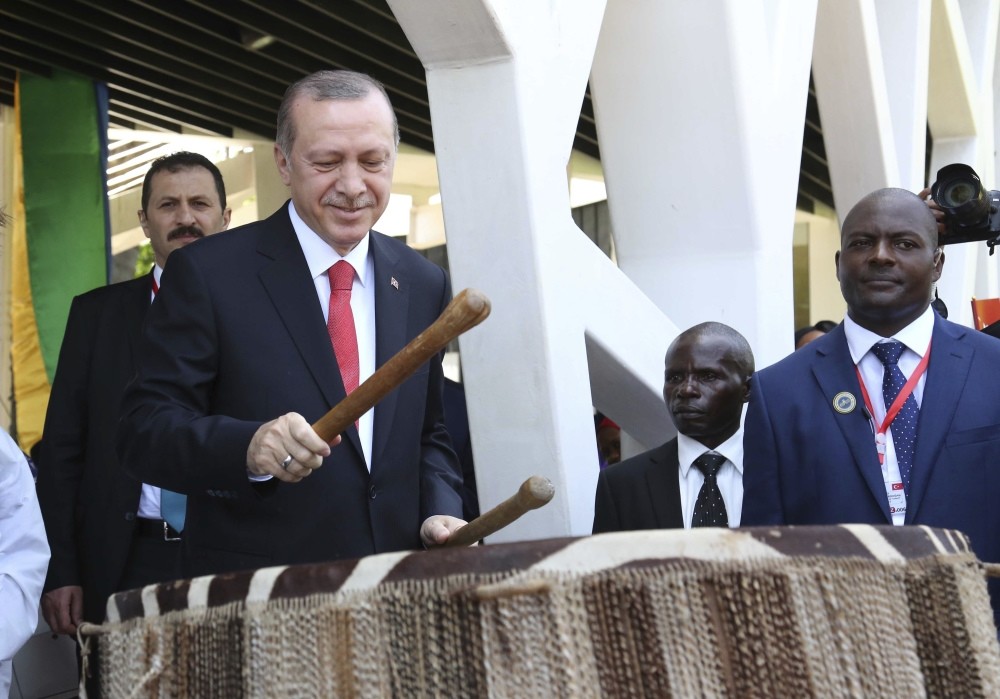 President Erdoğan's visit to Africa started in Tanzania, the land of the famous Mount Kilimanjaro. The president's visit not only reinforced political ties between Turkey and Tanzania, but also yielded many agreements that will further blossom bilateral economic ties

President Recep Tayyip Erdoğan started his three-day Africa visit in Tanzania and on the first day of his visit, he was given a warm welcome by Tanzanian President John Pombe Joseph Magufuli and the Tanzanian people at a welcoming ceremony. Following a series of meetings in which collaboration agreements were signed, President Erdoğan participated in the meeting of the Turkey-Tanzania Business Council of the Foreign Economic Relations Board (DEİK) as part of his visit to Tanzania, accompanied by a delegation of politicians and businessmen who also attended. During the meeting, Erdoğan delivered a speech in which he highlighted the flourishing ties between Turkey and Tanzania, offering many opportunities to both countries with a win-win perspective.

Stating that both tête-à-tête and delegation meetings were very fruitful and resulted in agreements which will further strengthen the ties between Turkey and Tanzania, Erdoğan said, "Both private meetings and delegation meetings with Tanzania have been very fruitful and beneficial for the future of both countries. We have seen that there is great potential for cooperation between the two countries. We will further strengthen our bilateral ties with new projects in the sectors of economy, trade, tourism, agriculture, railway, industry and construction. The agreements we have signed clearly demonstrate our determination in achieving this purpose. Likewise, along with the more than 100 Turkish businessmen who have accompanied me, we have demonstrated the level of our commitment to this cooperation which is very important to us."

Noting that Turkey's aim is to prepare Turkish businessmen for the future, President Erdoğan expressed the country's will to increase investments in Tanzania, creating new jobs: "To that end, we encourage our entrepreneurs to capitalize on every opportunity and we will continue to do so. I am confident that the Tanzanian authorities will facilitate the work of Turkish investors. I believe that our bilateral trade volume, which currently stands below $150 million, should increase. During our meetings, we have agreed to raise this figure to $250 million during the first stage and then to $500 million," he continued.

The president pointed out that the developments in political relations should be duly reflected in trade ties between the two countries. Recalling that the foundation of the Turkish Embassy in Mozambique's city of Dar es Salaam in 2009 ushered in the strengthening of bilateral ties and boosted stable growth, the president underscored the importance of political stability and an environment of confidence crucial for economic development. President Erdoğan pointed out that the existing stability in Tanzania will greatly contribute to the investment environment, asserting that long-term stability and confidence are essential for maintaining healthy developments and industrialization. The fact that Tanzania, the center of eastern Africa, possesses these two essential elements provides a healthy investment environment, he added.

President Erdoğan also underscored that Tanzania stands out with its mineral and natural gas reserves, saying Turkey is among the world's largest economies thanks to the economic initiatives and reforms it has realized. Therefore, he stated, the mutual cooperation between Turkey and Tanzania will be based on a win-win philosophy, adding that Turkey does not approve of any type of cooperation which only reaps gains for one side.

Speaking at the press conference, Tanzania President Magufuli began his speech by greeting President Erdoğan and his delegation before addressing the nine agreements signed within the scope of the visit, saying: "Agreements signed by the two nations in the fields of defense, economy and education will strengthen the development of the two countries."

Pointing out that Turkish investors have provided employment to more than 2,000 people in Tanzania, Magufuli recalled that trade volume between the two countries reached $109 million in 2016. Suggesting that Tanzania intends to complete the megaproject that will connect Dar es Salaam to landlocked countries via railways by contracting the construction to a Turkish company, Magufuli said: "We applied for a loan through Türk Eximbank. The president also said they will support us."
RELATED TOPICS