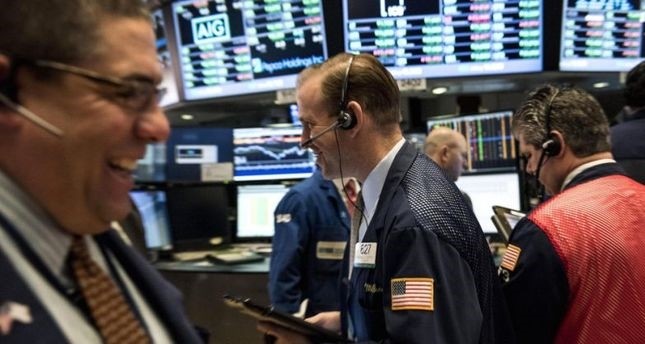 The U.S. dollar firmed against the yen and euro after losses in the wake of Trump's inaugural speech promising more trade protectionism, while U.S. Treasury yields recovered from Monday's slide.

MSCI's world index, which tracks shares in 46 countries, was up 0.53 percent, helped by signs of a revival of economic activity around the world.

U.S. stocks recovered strongly after Monday's dip and the S&P 500 and Nasdaq set record highs in a broad rally led by gains in financial and technology stocks.

He also met with chief executives of the Big Three U.S. automakers to push for more cars to be built in the United States.

"He is coming out of the gate strong and he is doing a lot of the things he said he would," said Joe Saluzzi, co-manager of trading at Themis Trading in Chatham, New Jersey.

"On top of that, earnings aren't a disaster so far, so why not - you've been stuck in a range and why not lift off to the next level?"

Yahoo rose 3.5 percent after the company reported better-than-expected quarterly profit and revenue and said the sale of its core internet business to Verizon should be completed in the second quarter.

European earnings season got off to a rocky start with profit warnings from BT Group and Aryzta sending their shares sharply lower, but the weakness was offset by gains in Italian financials and mining stocks.

The U.S. dollar rebounded against the yen and euro , paring recent losses related to the change in U.S. leadership, as bargain hunters stepped in and bought back the currency still viewed as having the best economic outlook in the developed world.

The dollar index, which measures the greenback against six major rivals, was up 0.12 to 100.28.

The stronger dollar weighed on gold prices, which slipped from a two-month peak. Spot gold was down 0.68 percent to $1,209.11 an ounce.

Oil prices climbed ahead of weekly U.S. inventory data on evidence the global market is tightening as lower production by OPEC and other exporters drains stocks.