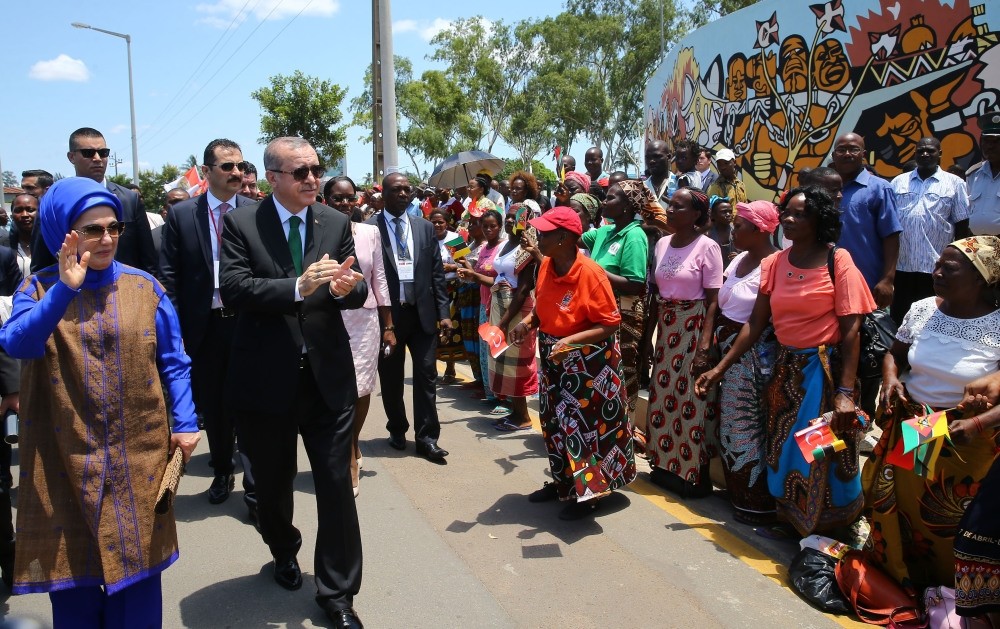 by Daily Sabah Jan 25, 2017 12:00 am
After his visit to Tanzania on Monday, President Recep Tayyip Erdoğan Tuesday arrived in Mozambique, the second stop on the president's southeastern Africa tour. President Erdoğan was welcomed with an official ceremony by Mozambique President Filipe Nyusi in Maputo, the capital of Mozambique.

As part of his visit, President Erdoğan held meetings with his Mozambican counterpart and following the meetings a press conference was held. At the joint press conference, the president elaborated on the necessity of further developing relations between Turkey and Mozambique in all areas, pointing out the great economic potential of the latter.

"I believe that we will increase our trade volume with Mozambique to $250 million and then reach $500 million. Mozambique should open its embassy in Turkey. We are ready to give all kinds of support on this issue," President Erdoğan said.

Noting that he is the first Turkish president to visit Mozambique, President Erdoğan said his next step will be much different and high level. "It is my greatest desire that this historic visit strengthens the relations between the two countries," Erdoğan said, adding that after gaining its independence, Mozambique has now left its hard times in the past.

Erdoğan pointed out that with its cultural richness and great economic potential, Mozambique is an important country on the African continent, stressing that this is "a great advantage" at a time when continental tensions are rising and conflicts are arising, and that as long as there is unity and solidarity, the future of Mozambique will be much brighter.

Underlining that some of the forces and difficulties in the country are temporary, Erdoğan said that the African country is determined to continue its efforts to fulfill its 2030 objectives and build a new future by "building on top of stones," a symbol that is sung about in the national anthem of Mozambique. "Turkey will continue to be with our Mozambican friends," Erdoğan added.

A country with immense resources in energy, but plagued by poverty, Mozambique is listed as one of the poorest countries in the world. However, the country is also rich in natural resources, according to information provided by the U.S. Energy Information Administration (EIA). Around 100 trillion cubic meters of natural gas was discovered in an area off the coast of the Rovuma basin in the northern Cabo Delgado region, making Mozambique Africa's third-richest country, after Nigeria and Algeria, in terms of natural gas reserves. The country, which currently has difficulties selling its reserves, sold a large portion of its 198 billion cubic meters of natural gas to South Africa in 2014.

Six agreements were signed in various fields between Turkey and Mozambique. Following the talks between President Erdoğan, who spoke to his contacts in Mozambique, the second stop in his East African tour, and Mozambique's President Filipe Nyusi, a signing ceremony was held at the presidential palace.

Agreements in the fields of diplomacy, trade, economy, culture and tourism were signed in the presence of President Erdoğan and Mozambique's President Nyusi.

Foreign Minister Mevlüt Çavuşoğlu signed the Mutual Visa Exemption Agreement and a Memorandum of Understanding on the Establishment of a Political Consultation Mechanism for diplomatic, service and special passport holders between Turkey and Mozambique.