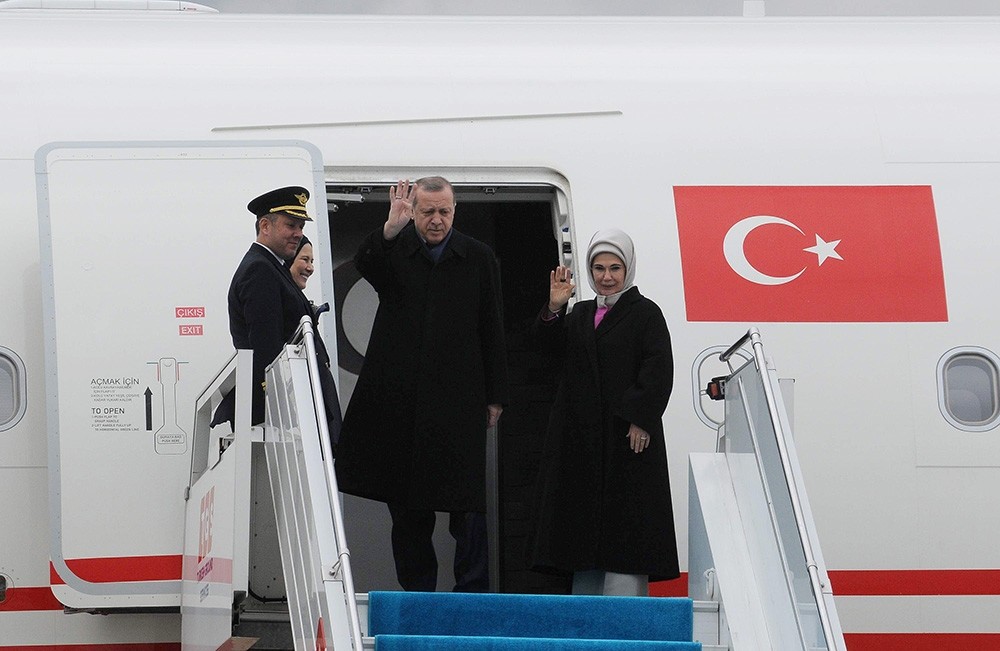 President Recep Tayyip Erdoğan's scheduled visits to Bahrain, Saudi Arabia and Qatar along with a delegation of businessmen from Feb. 12-15 are expected to further intensify Turkey's economic relations with the Gulf states. The president and the delegation accompanying him departed Istanbul for Bahrain yesterday.

The diplomatic relations between Turkey and Gulf Arab countries, which have gained momentum in recent years, have had positive impacts on foreign trade figures. Before his departure yesterday, Erdoğan said in a press meeting that their main focus will be economic and trade relations along with the issues of the region. The meetings will be focusing on increasing the trade volume with all the three countries, while Bahrain stands out with the housing projects waiting to be built, which is an expertise area for Turkish contractors, Qatar has promising projects for investors as the country will be hosting the 2022 FIFA World Cup, which requires a lot of infrastructure investments.

The president also underlined that the trouble spots in the region, like Syria, Iraq and Yemen, will be discussed in Saudi Arabia. He will be holding talks with King Salman bin Abdulaziz Al Saud, Crown Prince Prince Mohammed bin Naif bin Abdulaziz and Minister of Defense Prince Mohammad bin Salman Al Saud.

The economic relations between Turkey and the Gulf countries, which have a high per capita income thanks to oil and gas revenues, made significant progress when diplomatic relations intensified from 2007 to 2016. Turkey's exports that were carried out to the three countries amounted to nearly $33 billion in this period. Considering the total trade volume of $53 billion with these countries over the past decade, Turkey ran a foreign trade deficit of $13 billion. Among them, the oil-rich Saudi Arabia became the largest importer of Turkish goods with $27 billion from 2007 to 2016. It was followed by Qatar with $3.9 billion and Bahrain with $1.7 billion.

As far as their exports to Turkey go, Saudi Arabia's exports to the country amounted to $16.3 billion, and was followed by Qatar with $2.8 billion and $1.3 billion.

Turkey's imports from Saudi Arabia totalled $1.8 billion last year, with plastics and plastic products and mineral fuels being the most important import items.

Turkey's export to Saudi Arabia surged to $3.2 billion in 2016 from $1.5 billion in 2007. Electrical machinery and appliances, carpets and floor coatings constituted the most important export items.

Exports to Qatar have also increased significantly over the last decade. The bulk of the $440 million worth of exports to the country last year consisted of ships, yachts, electrical and electronic products, machinery and furniture.

Turkey's imports of $271 million from Qatar in 2016 are largely oil and oil derivatives, aluminum and plastic products.

Last year, Turkey's total exports to the three countries was at $3.8 billion, while the total foreign trade volume in this period stood at $ 6.2 billion.

Foreign Economic Relations Board (DEİK) Turkey-Bahrain Business Council Chairman Muhammet Uğurcan Barman has said that Bahrain will build about 20,000 social housing units, equating the project to building 40,000 houses in Turkey in the context of the country's average housing width of 200 square meters.

"I got a chance to have a long conversation with Bahrain's housing minister on the issue. We talked about the possibility of giving this project to Turkish companies by positive discrimination. With the support of Mr. President, this issue should definitely be brought to the agenda," Barman said.

The chairman said that some of the practices in Bahrain are close to the norms in the Western world, saying, "Therefore, it is one of the most suitable countries to do business with and live in among the Gulf states. A free trade deal with the U.S. makes them more advantageous."

Noting that official and private institutions in Bahrain have a very positive approach towards Turkey and the Turkish people, Barman said that companies can be established in almost 24 hours in the country with 100 percent foreign capital, adding that the absence of income and corporate taxes is an important advantage for investors.

Barman said that Turkish businessmen need to give up the misconception of acting in accordance with the geographical size and population of the country, pointing out that Bahrain has a lot of potential as a window opening to other Gulf Cooperation Council countries.

He added that it is possible to transport all goods to the Saudi market in four hours by land between Bahrain's capital Manama and Saudi Arabia's capital of Riyadh.

"In light of the fact that the Syrian-Iraqi route is closed and will not be opened for a long time, our government should prioritize the continuation of taking steps that will encourage air cargo transport, especially for the transport of fresh vegetables, fruits and other products to the Gulf," Barman said, adding that the joint project that would transform Bahrain into a "fresh fruit-vegetable market" or a distribution center will work in the interests of both countries.

DEIK Turkey-Saudi Arabia Business Council President Yusuf Cevahir pointed out that relations between Turkey and Saudi Arabia will enter a period of the greatest depth ever, stressing that cooperation is needed in more sectors to better serve the common interests of both countries.

Touching on the importance of the establishment of joint consulting and engineering firms by the two countries, Cevahir said, "Let's do it ourselves instead of receiving technical service from the West. Let's plan projects in such a way that both countries can use their own products [rather than depend on Western imports]. Let's find out what is being produced in Turkey and Saudi Arabia, and set the standards to include these products. Otherwise, materials used in projects carried out by Western companies will continue to be procured from Western suppliers."

Cevahir stated that the population of Saudi Arabia was rapidly increasing every year. Highlighting the need for housing increases along with the population, he also suggested that the two states establish an international joint company modelled after the Housing Development Administration of Turkey (TOKİ).

"Significant reductions in project costs can be achieved with contributions made possible by thousands of well-known Turkish contracting companies and the means of the two countries," he said, adding that, in turn, the bilateral trade volume will reach approximately $10 billion in a very short time, citing trade volume numbers which totaled roughly $5.9 billion in 2015.

Cevahir, referring to the difficulties Turkish businessmen have experienced in Saudi Arabia, noted that Saudi Arabia is currently applying the world's most expensive commercial visa requirements to Turkey with a payment of 8,000 riyals (about $2,133) for a two-year commercial visa. He stressed that they expect the figure to fall in the near future.

He stated that Turkish couriers carrying goods from Turkey to Saudi Arabia are not allowed to make home deliveries within the country, recalling the problems that transporters have encountered.

He further informed that local transporters load goods into their vehicles at border gates and that border crossing delays and the increasing number of intermediaries raises the costs of Turkish transporters.

The contracting industry is the most important sectors offering potential for foreign investors in Qatar, where the national income per capita is about $130,000 in accordance with the purchasing power parity due to oil and natural gas production and reserves.

The total amount of some 200 projects slated for completion in Qatar in the coming years is about $200 billion, 43 percent of which will be spent on infrastructure while the remaining sum will be used for the health and education sectors.

Meanwhile, as the country gets itself ready to host the 2022 FIFA World Cup, nine new medium and large-scale stadiums will be built. In the construction sector, the most important competitors against Turkish firms are Italy, Germany, the U.K. and China.