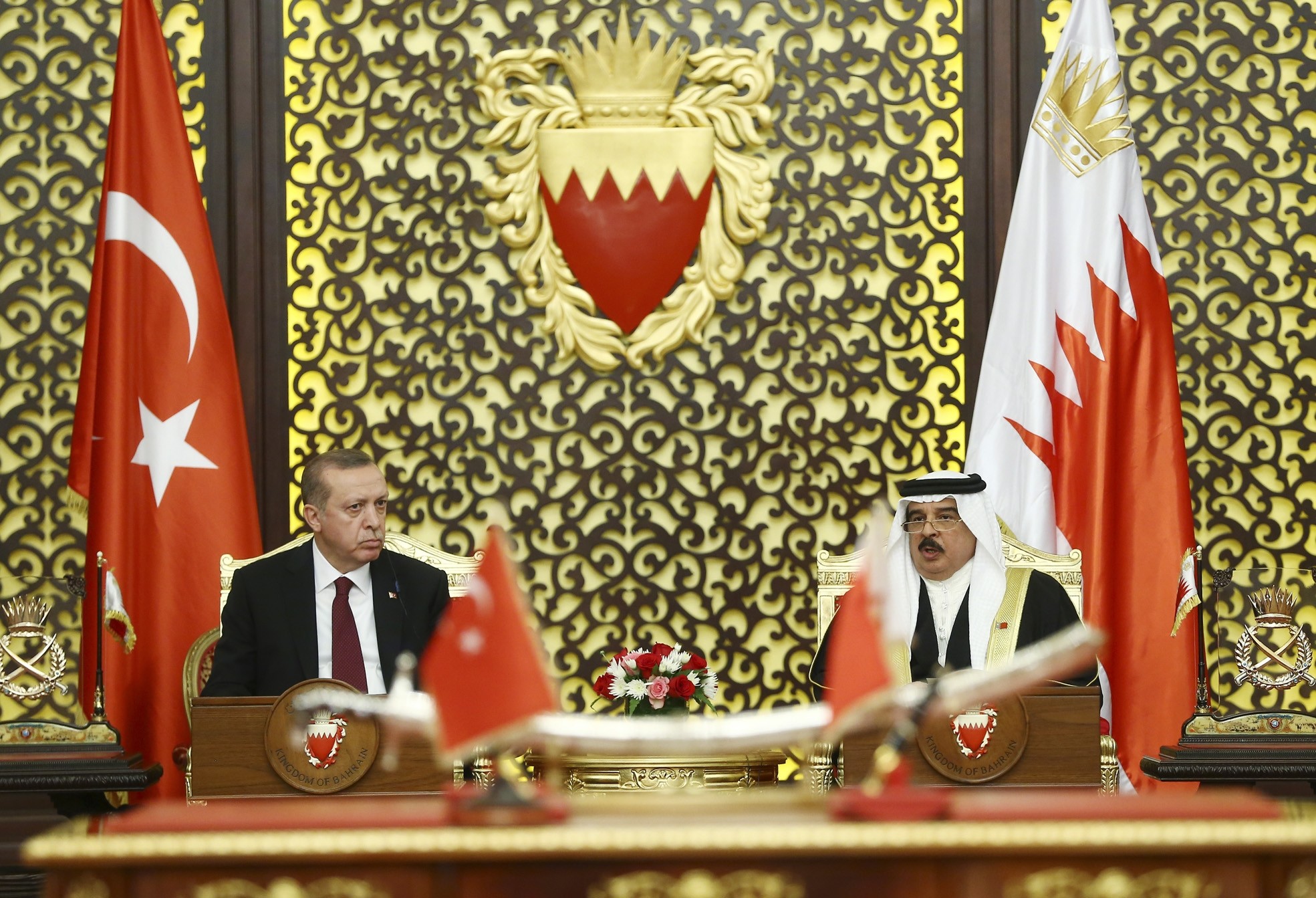 by Daily Sabah with AA Feb 14, 2017 12:00 am
President Recep Tayyip Erdoğan's visit to Bahrain on Feb. 12-13 strengthened relations between Turkey and Bahrain in a multitude of areas, including diplomacy, education and defense. The leaders of both countries signed four agreements in the mentioned areas to increase the determination for further cooperation. President Erdoğan delivered speeches and held talks in Bahrain during the first stop of his Gulf tour. Agreements were signed in the fields of diplomacy, education and defense at the joint press conference the president held with Bahrain King Hamad bin Isa Al Khalifa (R). Another agreement that was signed was to exempt regular passport holders from visa procedures in Bahrain – a privilege that official passport holders have already been enjoying.

Moreover, a memorandum of understanding between Bahrain's Ministry of National Education and the Council of Higher Education was signed. Agreements for cooperation in education covering 2017-2019, as well as memoranda of understanding in education and defense were also signed. All the agreements were signed by Foreign Minister Mevlüt Çavuşoğlu, Economy Minister Nihat Zeybekci, Energy and Natural Resources Minister Berat Albayrak and National Defense Minister Fikri Işık.

The economic relations between Turkey and the Gulf countries, which have a high per capita income thanks to oil and gas revenues, made significant progress when diplomatic relations intensified from 2007 to 2016. Turkey's exports that were carried out to the three countries amounted to nearly $33 billion in this period. Considering the total trade volume of $53 billion with these countries over the past decade, Turkey ran a foreign trade deficit of $13 billion.

Foreign Economic Relations Board (DEİK) Turkey-Bahrain Business Council Chairman Muhammet Uğurcan Barman has said that Bahrain will build about 20,000 social housing units, equating the project to building 40,000 houses in Turkey in the context of the country's average housing width of 200 square meters.

"I got a chance to have a long conversation with Bahrain's housing minister on the issue. We talked about the possibility of giving this project to Turkish companies by positive discrimination. With the support of Mr. President, this issue should definitely be brought to the agenda," Barman said.

The chairman said that some of the practices in Bahrain are close to the norms in the Western world, saying, "Therefore, it is one of the most suitable countries to do business with and live in among the Gulf states. A free trade deal with the U.S. makes them more advantageous."

Noting that official and private institutions in Bahrain have a very positive approach towards Turkey and the Turkish people, Barman said that companies can be established in almost 24 hours in the country with 100 percent foreign capital, adding that the absence of income and corporate taxes is an important advantage for investors.

Barman said that Turkish businessmen need to give up the misconception of acting in accordance with the geographical size and population of the country, pointing out that Bahrain has a lot of potential as a window opening to other Gulf Cooperation Council countries.

He added that it is possible to transport all goods to the Saudi market in four hours by land between Bahrain's capital Manama and Saudi Arabia's capital of Riyadh.

"In light of the fact that the Syrian-Iraqi route is closed and will not be opened for a long time, our government should prioritize the continuation of taking steps that will encourage air cargo transport, especially for the transport of fresh vegetables, fruits and other products to the Gulf," Barman said, adding that the joint project that would transform Bahrain into a "fresh fruit-vegetable market" or a distribution center will work in the interests of both countries.
RELATED TOPICS