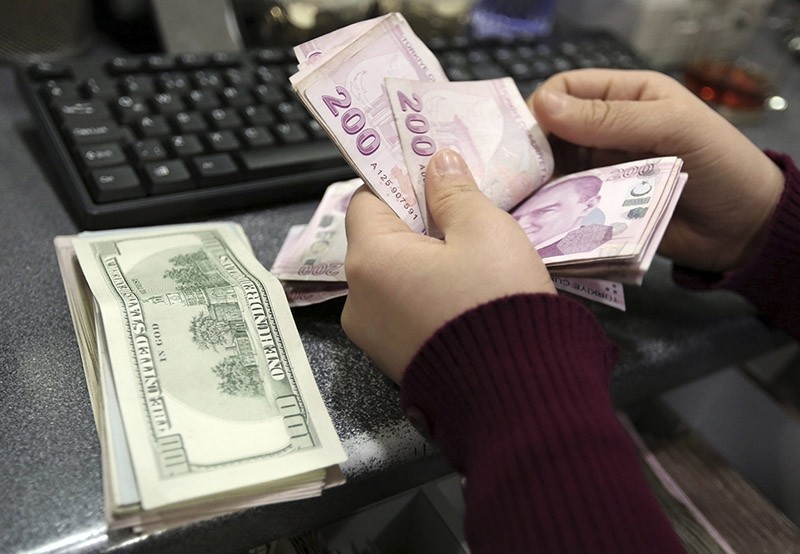 A woman counts U.S. dollar and Turkish lira banknotes at a currency exchange office in Istanbul. (File Photo)
by Daily Sabah with Wires Feb 14, 2017 12:00 am

Although the U.S. dollar hit record high a couple of times in January, the currency started the week at 3.70 and continued its depreciation against Turkish lira, quoted at 3.64 Tuesday afternoon. The downward movement in dollar/TL parity was substantially affected by the global and local developments

Having started the day on a downward trend, the dollar-lira parity has dropped to its lowest level in the last month at 3.6480 in the day-to-day market.

The dollar-lira has continued to go down because of the declining demand for the dollar in international markets. Yesterday afternoon, the dollar was quoted at 3.6480, the lowest level recorded since Jan. 9. With reactional purchases, it was sold for 3.6620 around 09.45 a.m. while the euro-lira was traded at 3.8900 in a horizontal trend and the pound-lira was traded at 4.5940 with a 0.1 percent decline.

Analysts suggest that 3.70 is the resistance level in the dollar-lira, while 3.65 and 3.61 are support levels.

The Turkish lira, labeled as the worst-performing emerging market currency of the past year, has risen by 6.4 percent against the dollar from its all-time-low level in January after monetary policy measures to boost yield appeal. Morgan Stanley and Societe Generale SA advised buying lira against the euro, voicing the Central Bank of the Republic of Turkey's (CRBT) reaction to the recent developments and slight positioning that could lead to a recovery in the Turkish lira.

The options market has been yet another indicator of the rising confidence in the Turkish lira. The implied volatility of one-month contracts declined to 13.7 percent from 24 percent, the peak level of past month. Moreover, the premium of put option against call option reduced to 2.4 percent, which was recorded as 4.4 percent in November.

The Turkish lira rallied by 0.7 percent against the euro at 6:30 p.m. on Monday, reducing its losses in 2017 to 5 percent. The lira also rose by 0.4 percent against the dollar. While Morgan Stanley advised investors to sell to the euro for TL 3.65, Societe Generale suggested a similar target of 3.5478.

Societe Generale's London-based strategist Phoenix Kalen said in a report on Friday that "The continued vigilance on the part of the Central Bank can help the gradual recovery of the Turkish lira in the coming weeks, resolving the low position of the Turkish lira can help it."

Garanti Bank General Manager Fuat Erbil said that the exchange rate will be stabilized with the clarification of internal and external dynamics affecting the dollar-lira level within the next two to three months and that the Turkish lira will gain value.

Erbil pointed out that the Central Bank's most important indicator is the average funding cost, saying, "It would be misleading to expect the average funding cost to relax when the inflation level is taken into consideration. The weighted average funding cost will not decrease in the short term major because of the inflation." Erbil stated that it would not be very accurate to expect the lira to plunge in an environment where inflation is likely to increase within the next one to two-month period, stressing that inflation dynamics in food prices will be followed in 2017. He also suggested that inflation will be under pressure as energy prices are higher than last year's.

Touching on realizations in 2016 and expectations for 2017, Erbil stated that the banking sector was comfortable in terms of capital in 2016. Stressing that the sector will continue to grow in 2016, Erbil said the sector will grow in proportion to its capital either by increasing profitability or with joint capital. "The volatility of the dollar exchange rate must be reduced," he said.