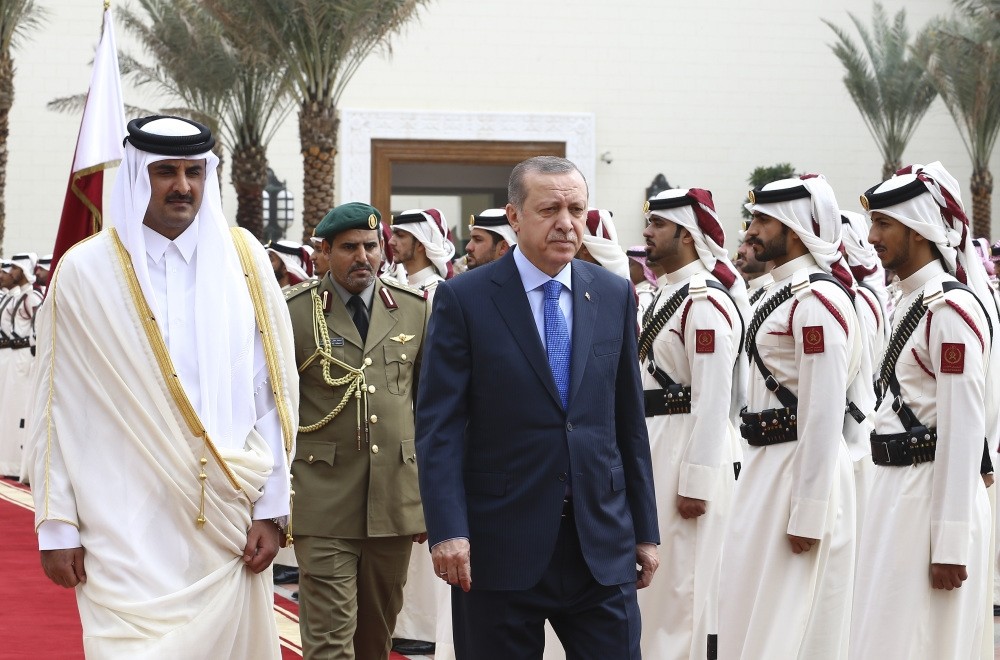 Erdou011fan ends his four-day Gulf tour in Qatar. The visit to Bahrain, Saudi Arabia and Qatar, reinforces Turkey's ties these countries.
by Hasan Ay
Feb 16, 2017 12:00 am

As President Erdoğan completed his Gulf tour in Qatar, the overall message of the visit conveyed to the world. Turkey and the Gulf nations are determined to reinforce not only political relations, but also the economic ties promising many lucrative agreements

President Recep Tayyip Erdoğan's four-day tour of the Gulf states, which included Bahrain, Saudi Arabia and Qatar, has not only reinforced political ties in the region but ushered in renewed determination for further economic cooperation with Turkey. Turkish firms were also invited to be part of the second bridge project, to be realized between Bahrain and Saudi Arabia. Bahrain's King Hamad bin Isa Al Khalifa also announced the construction of a new mosque in the capital city Manama with the capacity to hold 20,000 visitors and designed with traditional Turkish architecture, in honor of Erdoğan's visit.

According to information from presidential sources, Erdoğan and King Salman bin Abdulaziz Al Saud discussed economic relations between the two countries during the president's visit to Saudi Arabia as part of his Gulf tour, a meeting which was reported to be very productive and sincere. The Turkish-Saudi Coordination Council, which held its first meeting in Ankara last week, was instructed to plan concrete projects in the fields of economy, energy, the defense industry, infrastructure, superstructure and joint investment areas. The council is scheduled to prepare an action plan within the next six months for submission to the relevant authorities. Relations with the Gulf Cooperation Council (GCC) were among the top items on the agenda of talks. While President Erdoğan expressed Turkey's desire to complete and sign a free trade agreement with the GCC in 2017, King Salman also stated that he was similarly inclined and sent instructions on the issue to the relevant personnel.

It was noted that term chair Bahrain also had a positive outlook on the matter, but that seven members would need to give their approval. If this is successful, establishment of a Regional Customs Union would be possible, allowing Turkey to become more active, especially with regard to increasing economic and commercial relations with GCC countries.

At the Turkish-Saudi Coordination Council, the subject of awarding projects to Turkish companies in Saudi Arabia was also on the agenda, with King Hamad inviting Turkish companies to visit the construction site of the second Bahrain-Saudi Arabia bridge project. A technical delegation from Turkey will hold talks on the project to connect the countries via a second bridge, as well as other important infrastructural projects. The issue will be addressed in detail at the Joint Economic Council meeting to be held between Bahrain and Turkey March 2-3 in Istanbul.

The economic relations between Turkey and the Gulf countries, which have a high per capita income thanks to oil and gas revenues, made significant progress when diplomatic relations intensified from 2007 to 2016. Turkey's exports that were carried out to the three countries amounted to nearly $33 billion in this period. Considering the total trade volume of $53 billion with these countries over the past decade, Turkey ran a foreign trade deficit of $13 billion. Among them, the oil-rich Saudi Arabia became the largest importer of Turkish goods with $27 billion from 2007 to 2016. It was followed by Qatar with $3.9 billion and Bahrain with $1.7 billion.

As far as their exports to Turkey go, Saudi Arabia's exports to the country amounted to $16.3 billion, and was followed by Qatar with $2.8 billion and $1.3 billion. Turkey's imports from Saudi Arabia totalled $1.8 billion last year, with plastics and plastic products and mineral fuels being the most important import items. Turkey's export to Saudi Arabia surged to $3.2 billion in 2016 from $1.5 billion in 2007. Electrical machinery and appliances, carpets and floor coatings constituted the most important export items.

Exports to Qatar have also increased significantly over the last decade. The bulk of the $440 million worth of exports to the country last year consisted of ships, yachts, electrical and electronic products, machinery and furniture.

Turkey's imports of $271 million from Qatar in 2016 are largely oil and oil derivatives, aluminum and plastic products. Last year, Turkey's total exports to the three countries was at $3.8 billion, while the total foreign trade volume in this period stood at $ 6.2 billion.