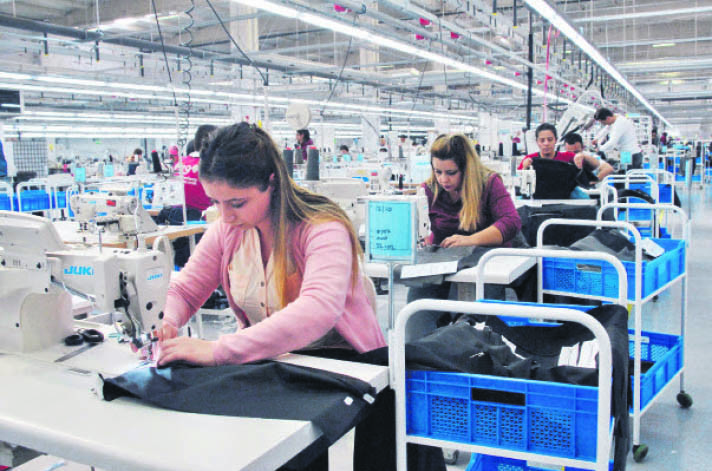 The reforms that the constitutional change will facilitate are stated to increase Turkeyu2019s growth and drive development by ensuring more investments, hence production.
by Daily Sabah Feb 20, 2017 12:00 am

As Turkey heads for the constitutional referendum on April 16, the whole country is currently engaged in a heated debate on the political, social and economic outcomes of the proposed systemic changes in the executive administration.

Authorities in the current government system and experts are weighing and evaluating economic governance in the new unified executive government model, which is called the presidential government system, as announced by President Recep Tayyip Erdoğan in a speech in Elazığ on Friday.

The most explicit outcome, as a number of ministers have stated, would be expedited reforms that will further drive the Turkish economy. On Saturday, Minister of Finance Naci Ağbal said the new president system would facilitate more effective and speedy decision-making.

"When we examine our future-oriented agenda that aims to develop Turkey, increase production, investment, employment and export, the presidential system is considered a primary reform, which is itself a significant and dramatic change," he said.

He added, "When we evaluate the new governance system in terms of economy, we see that the government reckons that the new unified executive system will yield an economic governance model that is able to take speedy and effective decisions with less bureaucratic hurdles and solve problems in a swift manner."

Meanwhile, speaking at an Economic Research Foundation conference, "The Economic Impacts of the Change in the Government System on the Turkish Economy," Deputy Prime Minister Numan Kurtulmuş discussed the outcomes of the new system on Saturday.

He stated that Turkey would make its qualified institutions much stronger in line with a new growth story and that the presidential government system will constitute the infrastructure of such operative economic governance. High-quality institutional infrastructure will maintain political and economic stability; therefore, long-term investment decisions will be more expeditiously taken and implemented.

The deputy prime minister noted that the purpose-oriented and well-ordered administration system would lower uncertainties that may stall powerful economic management in addition to maintaining sustainable growth.

The most efficient yield under the new model of governance would be the ability of public institutions that supervise economic reforms to make rapid, productive decisions that would in turn facilitate fast implementations of necessary reforms, claimed Kurtulmuş.

Turkey, of late, has been struggling to introduce several economic reforms to drive its economic growth and make the country a high-income economy by the 100th anniversary of its foundation as a Republic, a primary goal of the vision 2023.

To execute and implement necessary reforms more effectively, the country requires a better-coordinated economic governance model, which the current system cannot provide to the full extent due to over-bureaucracy. In this regard, experts claim that a more unified executive branch will maintain necessary coordination among the bodies that monitor the economy and regulate markets.

"For the successful realization of all these goals under the coordination of a unified and strong executive, which would oversee the formulation of a new development narrative based on real economy, industry-technology linkages, modern agriculture and information technologies, Turkey desperately needs constitutional reform," he asserts.

Referring to super-ministries in developing countries in Eastern Asia, such as China and Sri Lanka, brought about by constitutional reform to expedite reforms and create consolidated and centralized coordination for economic governance, Ünay asserts that achieving centralization at the top of the executive around the presidency seems to be the only viable option for better policy coordination. Moreover, the constitutional amendment will also permanently eliminate the economic tutelage of certain business circles "by ensuring political stability and robust executive authority that leaves no room for politico-economic manipulation."

Referring to the New Deal policy executed by Franking D. Roosevelt in his tenure as U.S. president throughout the years following the 1929 Great Depression, which engulfed not only the U.S but also many countries around the world, Cemil Ertem previously elaborated on the outcomes of the New Deal Policy in the U.S. and drew an analogy between the yields of the policy and the goals of constitutional change in Turkey in his article "Period of period of market-friendly reforms starts in Turkey."

In addition to revival and reconstruction of the U.S. economy, the New Deal also brought a systemic struggle with criminal economic structures that derailed the system, according to Ertem. Roosevelt was able to implement Keynesian economic policies, named after eminent economist John Maynard Keynes, thanks to new laws and newly established institutions, Ertem notes. He argues that the New Deal purified the system of criminal organizations, money launderers and ill-sourced gains, which bore market-friendly reforms in the U.S. economy.

Ertem defines Turkey's pursuit of a constitutional reform as a new New Deal. The presidential government system, which will be voted out on in the April 16 referendum, will result in systemic and constitutional institutions independent of political power and facilitate the execution of necessary market-friendly reforms more conveniently.

Now, 55 days ahead of the constitutional referendum, Turkey is more intrigued by the questions and possible gains of the new presidential government system. Yet, as many authorities, including the president himself have underscored many times, Turkey is in need of introducing structural reforms for sustainable growth and development as well as for an economic governance model independent of the tutelage of international economic bodies and domestic business circles.
RELATED TOPICS