Istanbul New Airport to create 225,000 jobs within next 8 years 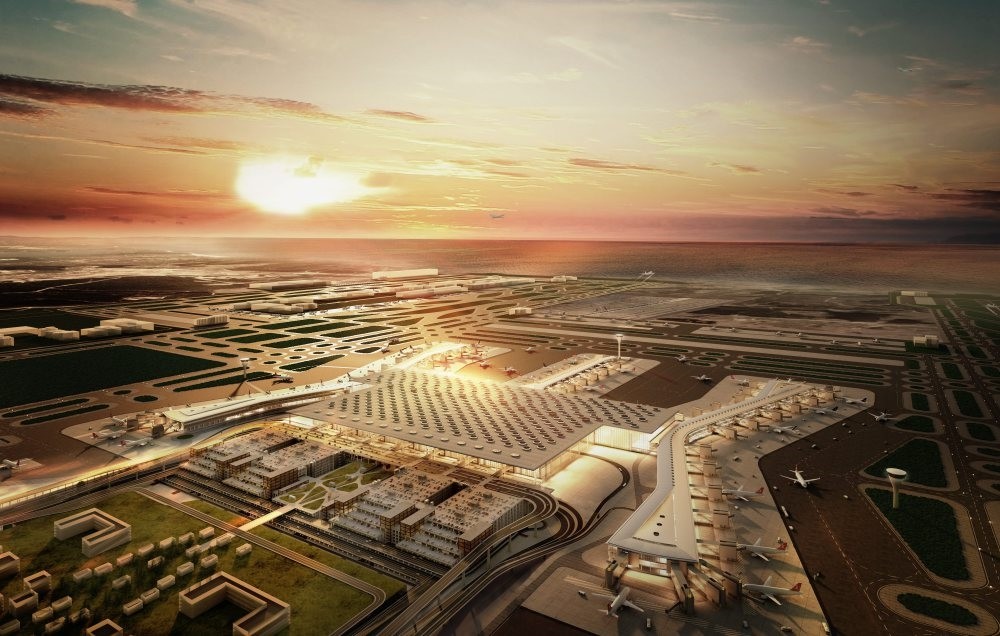 As the construction of the Istanbul New Airport continues in an accelerated manner, the terminal which would accommodate 90 million passengers annually and the three airfields are planned to open in 2018.
by Daily Sabah Feb 24, 2017 12:00 am

As the economic impact report on the Istanbul New Airport lays out, the airport with an investment worth of 10.2 billion euros will create 225,000 jobs and make a TL 73 billion contribution to the Turkish economy by 2025

In its economic impact analysis report on Istanbul New Airport, the Center for Economics and Foreign Policy Studies (EDAM), has said the airport, will provide employment to as many as 225,000 people and make TL 73 billion ($20.40 billion) worth of contributions to Turkey's economy by 2025.

Construction work at the 10.2-billion-euro project is currently at 42 percent, with the first phase expected to be finished in 2018.

In the report, IGA Havalimanı İşletmesi A.Ş. CEO Hüseyin Keskin pointed out that the airport will make significant direct and indirect contributions to the economy, not only with its construction, but also with its entire structure.

As per the analysis report, Istanbul's new airport will provide employment to 225,000 people by 2025. The additional household income to be generated will go up to $4.4 billion and its contribution to the economy will reach around 4.9 percent of the national income (TL 73 billion).

"These are the best-case scenarios. But even in a worst-case scenario, we call this a "differentiated world scenario," the share of the airport in national income still reach 4.22 percent. Even under worst case scenarios, it would make serious contributions to the economy," IGA CEO Keskin said.

The construction of the airport, with 23,000 people working three shifts, is nearly half finished (42 percent). After constructions were shut down for 19 days due to heavy winter weather this year, work resumed at an accelerated pace in order to recover the lost time. In June, an additional 7,000 people will be hired, taking the total work force to 30,000 and in the first quarter of 2018, the first phase of the airport will go into service.

Compared to other airports, Istanbul New Airport will surpass the Netherlands' Schipol and France's Charles de Gaulle, which leads in terms of contribution to national income. Experts said that while, for instance, Schipol Airport covers 1.1 percent of Amsterdam, Istanbul New Airport, once completed, would cover 1.4 percent of the city, which will of course create a new ecosystem, social space and demography in this region.

The New Airport's contribution to Turkey's Gross National Product (GNP) would vary between 4.2 percent and 4.9 percent, in the worst- and best-case scenarios, in correspondence to its ambitious size.

This is an extremely important and non-negligible figure for a country like Turkey, because economic growth here depends on the development of industry and trade, as it adopted an export-based growth model.

Meanwhile, the withdrawal of Dutch company Northern Forests Defense's (KOS) from the project "on the grounds of the ecosystem" has been short-lived, as the company, working on baggage handling, continued its work without interruption.

Pointing out that the Dutch company has continued its work, Minister Arslan said, "A large number of foreign companies are knocking on the IGA's door every day to become part of the project."
RELATED TOPICS