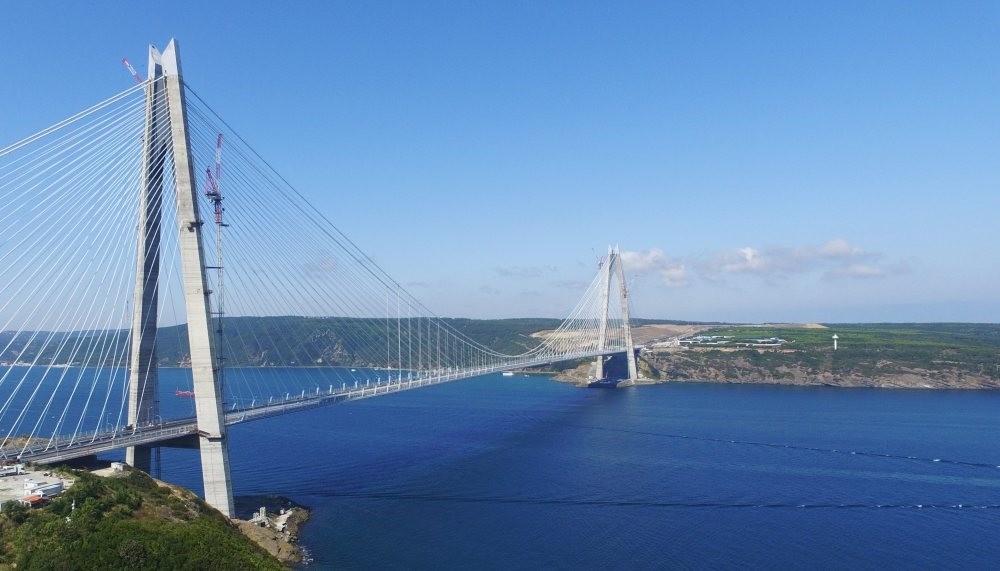 One of Turkey's recent mega projects, the Yavuz Sultan Selim Bridge, completed with an investment of $3 billion, connects Asia to Europe.
by daily sabah
Mar 02, 2017 12:00 am

As Turkey continues to strengthen its collaboration with Eurasian countries at the ECO Summit, President Erdoğan highlighted that Turkey's mega projects are the modern version of the Silk Road, adding that the country is ready to embark on full cooperation to achieve the ECO's 2025 vision

Speaking at the 13th Economic Cooperation Organization (ECO) Summit, President Recep Tayyip Erdoğan emphasized that Turkey has accomplished many great infrastructural and transportation projects in recent years, which he described as the continuation of the ancient Silk Road that controlled trade between Asia and Europe for centuries.

Referring to the mega projects that Turkey has implemented in recent years, Erdoğan said, "We inaugurated the Yavuz Sultan Selim Bridge as well as the Marmaray and Eurasia tunnels which connect Asia to Europe. We inaugurated the Osmangazi Bridge which runs in the northbound and southbound directions across the Sea of Marmara. We attach tremendous importance to the Edirne-Kars high-speed railway and the Baku-Tbilisi-Kars railway projects, which are under construction, as well as the 1915 Çanakkale Bridge which will be built on the Dardanelles." Defining these investments as constituents of the modern version of the historic Silk Road, Erdoğan noted that he believes that China's new Silk Road project, known as One Belt, One Road (OBOR), is of great importance in this regard.

Underlining that the Istanbul New Airport, which will be the largest airport in the world upon completion, will make tremendous contributions to the region, Erdoğan stated that Turkey is actualizing all these projects for both itself and the more than 400 million "brothers" who live in the ECO Region.

During his speech at the summit in the Pakistani capital of Islamabad, the president underlined that Turkey is ready to achieve the goals of the 2025 Vision which will be addressed during the summit.

Stressing energy as one of the key areas requiring further consolidation of the ECO, Erdoğan said Turkey will provide support for any initiative that will make the energy issue an important element of cooperation. Erdoğan noted, "Certainly, we must use the organization's platforms in the fields of agriculture, environment and tourism more effectively. We attach great importance to the 2025 Vision. We believe that this vision will effectively lead our cooperation efforts for the next 10 years."

Erdoğan stressed that the establishment of the Vision Implementation Fund is important for the implementation of the official vision, adding that the establishment of the fund should be made within the body of the ECO Trade and Development Bank in order for it to operate in an effective and efficient way. He also noted that Ecobank, which is of critical importance in terms of project and trade financing, must be strengthened and its activities must be diversified.

Erdoğan noted that even though the ECO region's share in the world population was 6.2 percent, its share in world trade was merely 2 percent in 2015, stressing that it is essential to take steps to boost intra-regional trade and said: "Therefore, it is crucial to implement the Economic Cooperation Organization Trade Agreement (ECOTA)."

Pointing to the fact that the ECO encapsulates a population of more than 400 million within an area of nearly 8 million square kilometers (3.1 square miles), Erdoğan said, "This organization, which we are proud of being a member of, also represents our common values, deeply rooted history and brotherhood."

He defined the summit as an important opportunity for assessing the overall picture of the organization, evaluating it and identifying its deficiencies to further strengthen its vision accordingly.

Erdoğan stressed that current figures clearly demonstrate that the organization cannot sufficiently mobilize its potential, asserting: "Although the ECO region's share in the world population was 6.2 percent in 2015, its share in world trade was merely 2 percent. We have to take steps to boost intra-regional trade. Therefore, the actualization of ECOTA is crucial."

Inviting member states to fulfill the necessary requirements to activate the project, Erdoğan stressed that the ECO should upgrade the quality of air, land and railroad links to boost trade and contacts among member countries. According to Erdoğan, the main theme of the summit was, "Connecting lines of transportation, communication and trade for the welfare of the region," revealing the organization's needs in this regard. "The effective implementation of the framework agreement on transit transport will contribute to the further creation of transportation corridors across the region," he added.