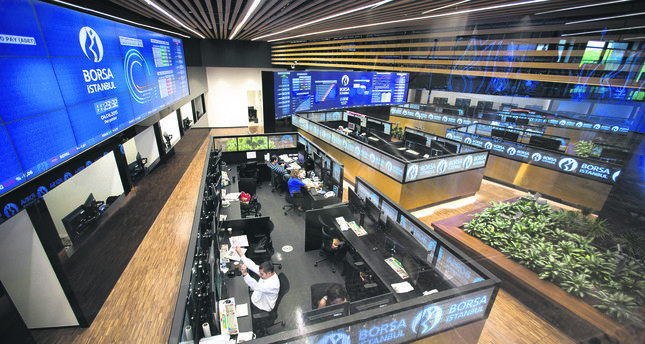 by Daily Sabah with AA Mar 06, 2017 12:00 am
The BIST 100 index, the Borsa Istanbul stock exchange's main benchmark index, which has completed February at 87.478,33 points with a gain of 1.37 percent, continued its upward trend for a period of three consecutive months for the first time since April 2016.

Following the election of Donald Trump as president of the U.S., the BIST 100 index, which soared in line with the gains in global stock markets, sustained its upward trend in February.

Speaking to local reporters, Tuncay Turşucu, Integral Securities Research Director, recalling that the index did not go above the 89.537 level, which was seen on Feb. 6, said, "While the increase in index since the beginning of the year was about 14 percent, we are facing a 22 percent hike when we make this calculation from early December."

Expressing that the index was flat during the last week of February after the steep increase, Turşucu noted that there was an evident depreciation in the U.S. dollar during the same period, which also supported the increase in index.

Noting that foreign investors have bought shares worth $1 billion since the beginning of the year, Turşucu said, "We saw last week that the index was settling within the band of 89.00-90.00 and the dollar discontinued tumbling, reversing its direction upward. If the potential sell-off in the index continues below the 87.00 level, sales pressure could be strengthened and we can again see the level of 83.00."

He also noted that these levels may be an opportunity for medium-term buying again, and if the index maintains a level of 89.00, the probability of seeing 91.8 and then 93.4 will increase.

Turşucu emphasized that the referendum process occupying the internal political agenda and its outcome are the most important agenda items that could be influential on the markets. Moreover, he also indicated that the inflation rate and the reaction of the Central Bank of the Republic of Turkey (CBRT) to the inflation will also yield an impact on the index.

With regards to the global markets, he underlined that Trump's tax decisions are awaited. Another issue that will be decisive for the global markets will be the action and how soon the U.S. Federal Reserve will decide on an interest rate hike.

Value of BIST companies increases to TL 700B

As of Dec. 30, 2016, the total market value of the companies listed in the Borsa Istanbul stock exchange (BIST) was approximately TL 616 billion ($166 billion), which was calculated at TL 699 billion as of March 3, 2017, according to information compiled from the Borsa Istanbul data.

Thus, while the total market value of the companies whose shares are traded on the Borsa Istanbul has reached almost TL 700 billion, there has been a value increase of TL 83 billion in just two months since the beginning of the year.

A significant portion of the increase in value of TL 83 billion during this period came from "giant" companies such as Koç Holding, Garanti Bankası, and İşBank. Namely, at the end of 2016 the market value of the 20 most valuable companies, which was TL 372.453 billion, increased to TL 426.79 billion by March 3, 2017.

Thus, the "giants," which added about TL 54.3 billion to their value in a short period of 2 months, did not add such a value even in the entirety 2016, and rose TL 42.659 billion in 12 months last year.
RELATED TOPICS