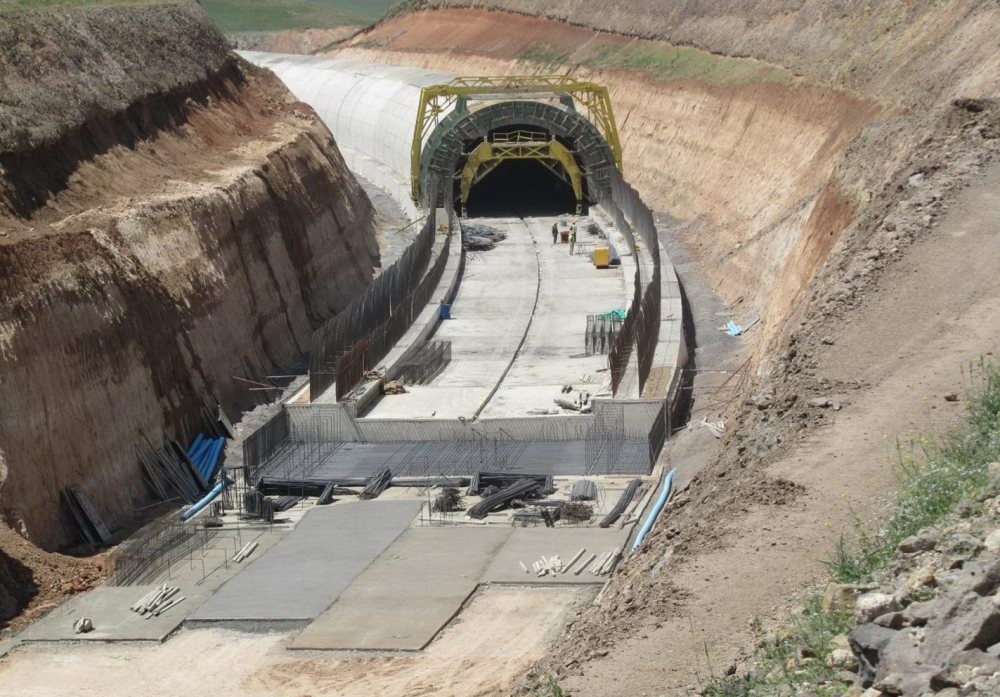 The construction site of the Baku-Tbilisi-Kars railway, is one of the most important projects in the Eurasia region, increasing regional activity.
by Daily Sabah with AA Mar 07, 2017 12:00 am

The work on the Baku-Tbilisi-Kars railway project, whose progression is being closely monitored by countries around the world, is nearing its completion and set to be put into service in June. The railway project will have major importance for countries that will trade through Turkey, which is expected to double its railroad capacity with the project

Transportation, Maritime and Communication Minister Ahmet Arslan said that the Baku-Tbilisi-Kars railway project, the total cost of which is $450 million, is in the completion phase, stating that they want to finish the construction in two months, run test drives upon completion and commence operations for diesel locomotives in June. The Baku-Tbilisi-Kars railway project will span a total of 838.6 kilometers, connecting the Eastern Turkish province of Kars with the Azeri capital, Baku, and the Georgian capital, Tbilisi, in Central Asia. In addition, he indicated that this project is not only important for Turkey, but also for all the countries of the world that wish to trade through Turkey, adding that the cargo shipped from China, Kazakhstan, Turkmenistan, Azerbaijan and Georgia will go to Europe through Turkey.

Arslan pointed out that the cargo from Europe will be brought to Asia through Turkey with this project. "This will not only add value to our country in terms of transportation, but will integrate with the transportation system of the whole world, and we will be able to carry much more cargo in the railway sector," he said.

Speaking to Anadolu Agency (AA), Minister Arslan said that this year's snow and cold weather brought productivity to the region and the country, but that it also disrupted work on the Baku-Tbilisi-Kars Railway project. Moreover, Arslan, noted that they will increase the work on the project due to disruptions.

The project will make Turkey more active in the railway sector, said Arslan. Making evaluations about the importance of the railway project, he stated that the railway line from Europe will pass under the sea to Kars with the help of the Marmaray project, an underwater rail system connecting Istanbul's European and Asian sides under the Bosporus. However, Arslan stressed that the railway does not extend beyond the Kars province, adding that the work on the Baku-Tbilisi-Kars Railway project currently continues so as to complete this important missing ring. "The construction has actually come to an end, but we were able to work in some places and in some places we did not because of the heavy winter conditions," said Arslan.

Besides Turkey, the world is also monitoring the project

Emphasizing that, besides Turkey, countries around the world are following the project, Arslan said that the project was also on the agenda at the meeting of the Economic Cooperation Organization (ECO) in Pakistan.

Recalling that they were in Pakistan last week with President Recep Tayyip Erdoğan, Arslan said that the project concerns all of the 10 Economic Cooperation Organization member countries, including Iran, Pakistan, Afghanistan, Azerbaijan, Kazakhstan, Kyrgyzstan, Tajikistan, Turkmenistan and Uzbekistan. He also noted that all of these countries are awaiting the completion of the Baku-Tbilisi-Kars Railway project "with great curiosity."

"When we think about the transportation corridors between Europe and Asia, we expect the Baku-Tbilisi-Kars Railway project, which set up the middle corridor on the fastest, shortest distance, to finish as soon as possible. When this project is completed in June, I hope that Turkey as well as other countries around the world will be able to benefit from this project. The project will of course contribute to Eastern Anatolia, and it will also make a significant contribution to our country's railway sector," said Minister Arslan.

Transport between China, Europe will be reduced 3.5 fold

Indicating that product transfers going from China to European Union (EU) countries and world markets by sea arrives within 45 and 60 days, Arslan pointed out that products going through the northern corridor to Russia could reach its destination in a period of just over a month. Moreover, saying that the Baku-Tbilisi-Kars Railway project would reduce the time and cost of transport, Arslad said: "When the Baku-Tbilisi-Kars Railway project is completed as a complement to the central corridor, a load from China will travel to Europe by rail in 15 days. The distance will be reduced by three times, saving both time and money. Therefore, many once expensive transport costs will become economical when transport time falls from 45 days to 15 days."

Importance of the Baku-Tblisi-Kars railway

The Baku-Tbilisi-Kars (BTK) railway has come to the fore as a critical project at the western end of the Silk Road. Similar transportation projects also reinforce Turkey's economic and political ties with other Eurasian countries.

With a view to offering a more efficient approach to transportation that may facilitate trade between China and the European Union, China identified three land routes and a maritime route within the framework of the OBOR initiative. One of the three land routes, the Middle Corridor, passes through Kazakhstan, Azerbaijan, Georgia and Turkey.

"Although various options, such as highway, airway, land and maritime routes, are on the table for China and the OBOR participant countries within the framework of regional integration, railway transportation seen as more time-efficient, environmentally friendly and secure compared to the others. Hence, projects in the context of the 'Iron Silk Road' are expected to gain more momentum in mid-2017," wrote Özge Nur Öğütçü in a recent op-ed, drawing attention to the fact that the BTK railway will provide an uninterrupted corridor from China to London, once finished.
RELATED TOPICS