Economy to be major point of discussion at Erdoğan, Putin meeting 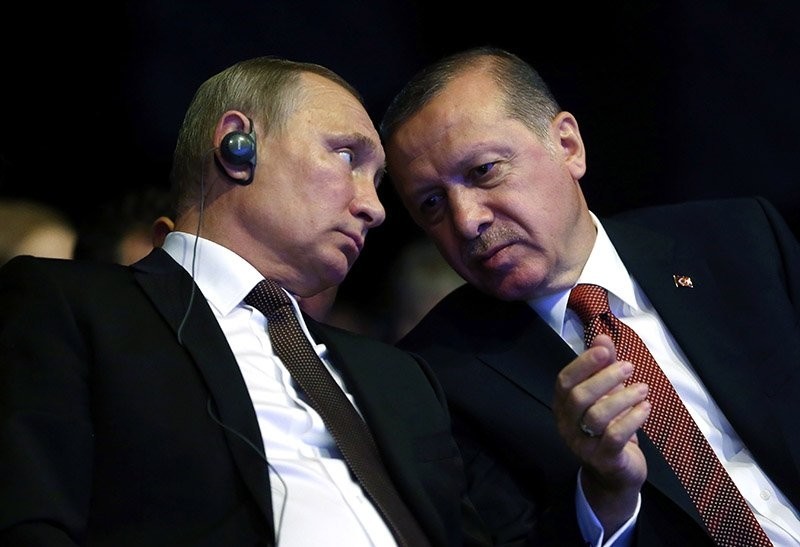 Turkish President Recep Tayyip Erdou011fan (R) talking with his Russian counterpart Vladimir Putin during the opening ceremony of the 23rd World Energy Congress in Istanbul, Turkey.
by Daily Sabah with AA Mar 09, 2017 12:00 am
President Recep Tayyip Erdoğan will pay a visit to Russia on March 10 to attend a high-level meeting with Vladimir Putin where economic issues, energy and military cooperation, withdrawal of some present travel restrictions on Turkish nationals and import restrictions on Turkish companies and food products are likely to dominate the agenda.

Erdoğan and his entourage are scheduled to visit Moscow on March 10 to attend the Turkey-Russia High Level Cooperation Council (HLCC) meeting, which was canceled last year due to the fighter jet crisis between the two countries.

Erdoğan and his Russian counterpart Putin, who will meet as part of the HLCC meeting, are expected to sign agreements to boost cooperation in the fields of economy, energy military and culture and address "easing" Russia's ongoing travel restrictions on Turkish nationals and import restrictions on some Turkish food products in a more concrete manner.

On March 6, Russian Presidential Press Secretary Dmitry Peskov said that the HLCC meeting to be held with Turkey would have a unique format.

He pointed to the significance of the summit for Russia, saying, "The format of this meeting, which stipulates the participation of the Cabinet of Ministers, is practiced by Russia with just a few countries."

Sanctions on the agenda

One of the segments that looks to be closely followed at the summit concerns Turkish businessmen and companies operating in Russia. While some rapid steps have been taken to normalize relations between Turkey and Russia, two of the strongest countries in the region, some of the bans imposed by Russia on Turkey last year are still in force.

Following the fighter jet crisis, which broke out after Turkey downed a Russian fighter jet for violating its airspace on the border with Syria in November, opportunities for Turkish companies to join tenders in Russia were restricted, and Russian companies were largely banned from employing Turkish citizens.

Due to the ongoing prohibitions, many Turkish businessmen had to hand over their shares in companies in Russia, while some of them withdrew from the Russian market because of their declining competitive power.

Naki Karaaslan, Chairman of the Russian-Turkish Businessmen's Association, told the Anadolu Agency (AA) that they expected the complete removal of legal decrees issued after the fighter jet crisis that put some travel restrictions on Turkish nationals, the sectoral activities of Turkish companies and the import of Turkish agricultural products.

Karaaslan said that they also want to resolve problems with respect to employment visas, technical visas and laborers' quotas. He added, "These issues need to be resolved definitely, so that Russian companies with Turkish capital, employing 100,000 people can continue to survive in Russia."

Sergey Chemezov, the CEO of Russian state-owned technology company Rostec, said negotiations between the two countries were on going and added that they were working on the financing process for the sale of the S-400 system.

Last week, Russian Deputy Minister of Defense Alexander Fomin noted that Turkey and Russia were continuing negotiations on the S-400, while Erdoğan and Putin were likely to reach an agreement on the issue during the upcoming meeting.

Meanwhile, the TurkStream natural gas pipeline project has been an issue regarding which mutual steps have been taken at the fastest pace after the normalization process. Within the scope of the project, almost all of the permits were issued to the Russian energy company, Gazprom, in a short time, for the construction of the pipeline. Gazprom Board Member Oleg Aksyutin said they were planning to start construction of the sea section in the second half of this year.

While the first line, planned to nourish the Turkish market with the capacity to carry 15.75 billion cubic meters, was expected to enter service at the end of 2019, Russia also stipulated a "demand guarantee" from Europe, for the second line, which is projected to extend into Europe.

Russia, which has been in talks with Turkish companies in this regard, expects Turkey to grant "strategic investment" status to the project to boost investors' interest in the project.

Furthermore, tourism has also been one of the sectors that have experienced a faster normalization process in bilateral relations.

At the beginning of the normalization period Putin approved the decree to re-launch charter flights to Turkey, while tour operator companies in Russia were allowed to sell holiday packages to Turkey in a short time. Experts expect more than 3 million Russian tourists to visit Turkey this year. The number declined significantly last year.

Currently, it looks unlikely that Russia would lift sanctions on tomatoes, one of the most important Turkish agricultural exports to the country, anytime soon. Some Russian officials have, however, indicated that they might lift bans on some Turkish food products at the HLCC summit this week.
RELATED TOPICS