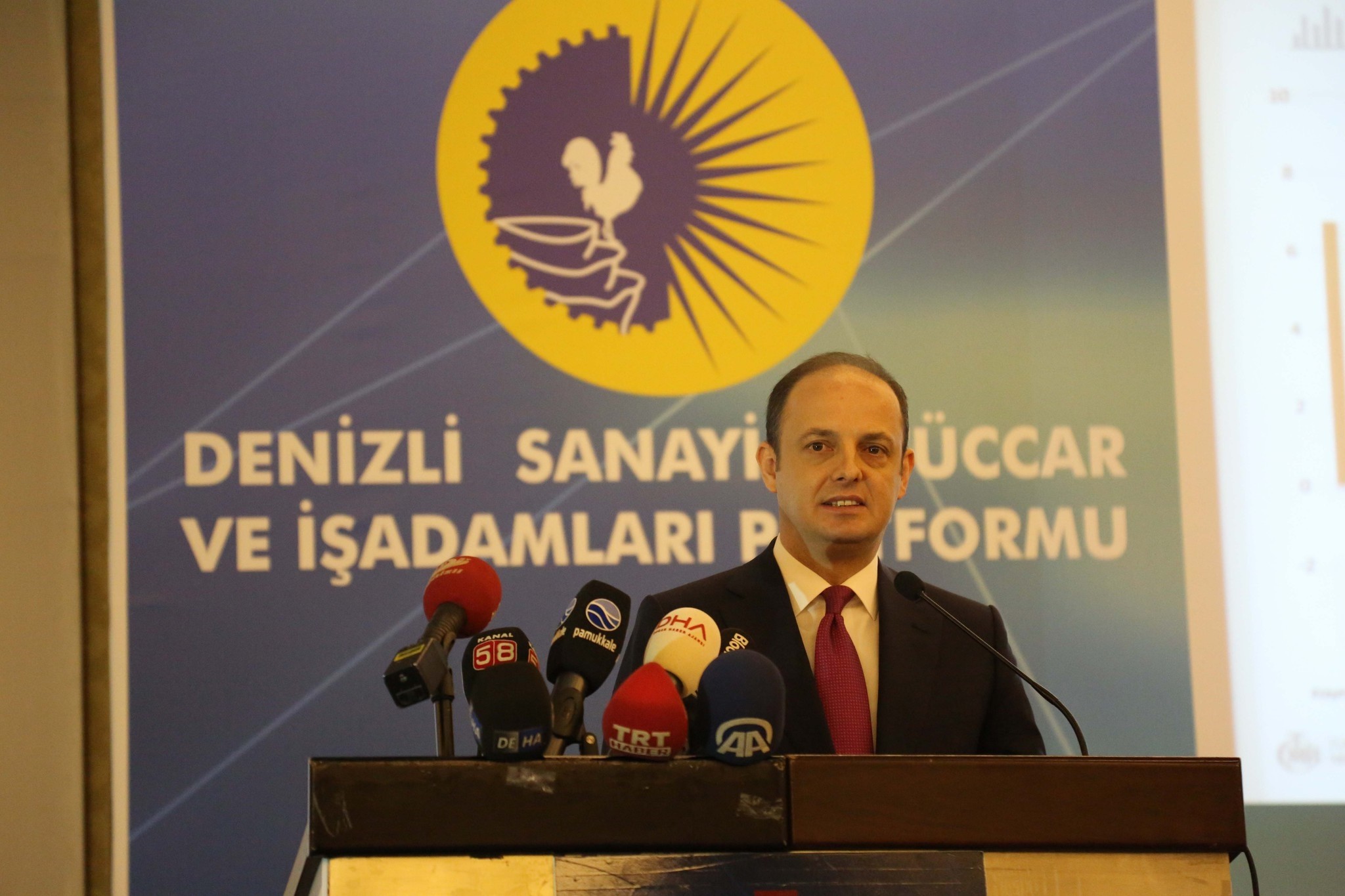 Central Bank Governor Murat u00c7etinkaya made a presentation on the macroeconomic outlook and price stability Wednesday.
by Daily Sabah Mar 09, 2017 12:00 am

Central Bank Governor Murat Çetinkaya signaled a recovery in the economy during a speech yesterday, underscoring the effectiveness of the measures taken since January. He also indicated a reverse in Turkey's current account deficit as well as a slowdown in the inflation rate, which saw double digits recently

The Central Bank of the Republic of Turkey's (CBRT) Governor Murat Çetinkaya delivered a speech in Aegean Denizli province, elaborating on the recent hotly debated economic issues such as the current account deficit, the inflation rate that has hit double digits and the real economy debt in foreign currency.

"With the support of recent measures, we see that the recovery trend in the economy has started. As a matter of fact, the deterioration in the real sector confidence indices seems to have recently reversed," the CBRT governor said, also noting that the recent increase in inflation and the current account deficit will reverse in the coming months.

Stressing that they, at the CBRT, will continue efforts to better understand the real sector dynamics, Çetinkaya stated that they regard this interaction as an important component of the strategy which they are pursuing to achieve price stability permanently.

The Central Bank governor informed that the Turkish economy has shown considerable resilience in the face of recent shocks in different qualities and that the contraction experienced in the third quarter of 2016 was not permanent as the economy once has again adopted a moderate recovery trend. He said that similarly, the recent increase in inflation and the current account deficit are anticipated to reverse in the coming months,

"Along with the coordinated and strong policy reaction of the CBRT and the public authorities, the dynamism and flexibility of our real sector constitute the basic components of this resilience," Çetinkaya said.

He further suggested that during a period when predictability is low on a global scale, the most important task is to move toward the main objectives while preserving the main focus.

"Our resilience will increase even more if policies implemented in coordination with the economy are supported by structural regulations. Regardless of the circumstances, as long as steps are taken to reinforce economic fundamentals, the effects of external factors will remain temporary," Çetinkaya added.

Çetinkaya indicated that there has also been significant improvement in export orders and emphasized that leading figures point to the recovery gaining strength in the second quarter.

He informed that the monetary policy measures "pretty much gave the targeted results."

The governor added that they could make additional monetary tightening "if necessary" by closely monitoring the factors affecting inflation and pricing behaviors.

"I am confident that we will gradually progress towards the target in the mid-term with the contribution of a monetary stance focused on price stability and the steps taken in structural areas," he said.

'Inflation will fall to reasonable levels'

Çetinkaya highlighted that as the lagged repercussions of the exchange rate and the base effects arising from the managed prices diminish, the inflation rate will fall to a more moderate level with the contribution of the firm stance in the second half of the year. He said that the effect of the moderate course of domestic demand on pricing behavior will be significant.

"On the other hand, increasing coordination between monetary and fiscal policies is also expected to support the disinflation process," Çetinkaya said, pointing out that the campaign should be supported with a holistic effort and a structural approach in order to keep inflation at a stable level.

"The impact of the measures we took is exactly as we planned," Çetinkaya noted.

The governor pointed out that the volatility of the exchange rate decreased significantly as a result of the steps taken in January.

"Of course, it is only natural that there will be occasional fluctuations depending on the news flow in the markets but what is important is that the measures taken balance the risks and turn the trend positively," he noted.

Çetinkaya said that it is important to encourage prudent borrowing and effective risk management in order to reduce the sensitivity of the Turkish economy to fluctuations in global conditions. He stressed that the real sector's activities regarding "foreign currency borrowing" are evaluated in the context of structural areas promising progress.

"Despite the fact that the real sector's borrowing rates in our country is not high compared to other countries of a similar economic make-up, the real sector's need to manage balance sheet flows in the short term may affect the risk perception against the exchange rate fluctuations," he said.

Noting that data and past experience suggest that the risks in this area are manageable, Çetinkaya pointed to the fact that the real sector has a long maturity in foreign currency borrowing comes to the fore as the main factor limiting the risks.

"According to the latest figures, the average maturity of foreign currency borrowing is about four-and-a-half years and it is continuing to increase. Considering the short-term position, it is observed that foreign exchange assets largely meet the foreign exchange liabilities," Çetinkaya said, suggesting that these factors allow the cash flows of Turkish firms to be less affected by exchange rate fluctuations.
RELATED TOPICS