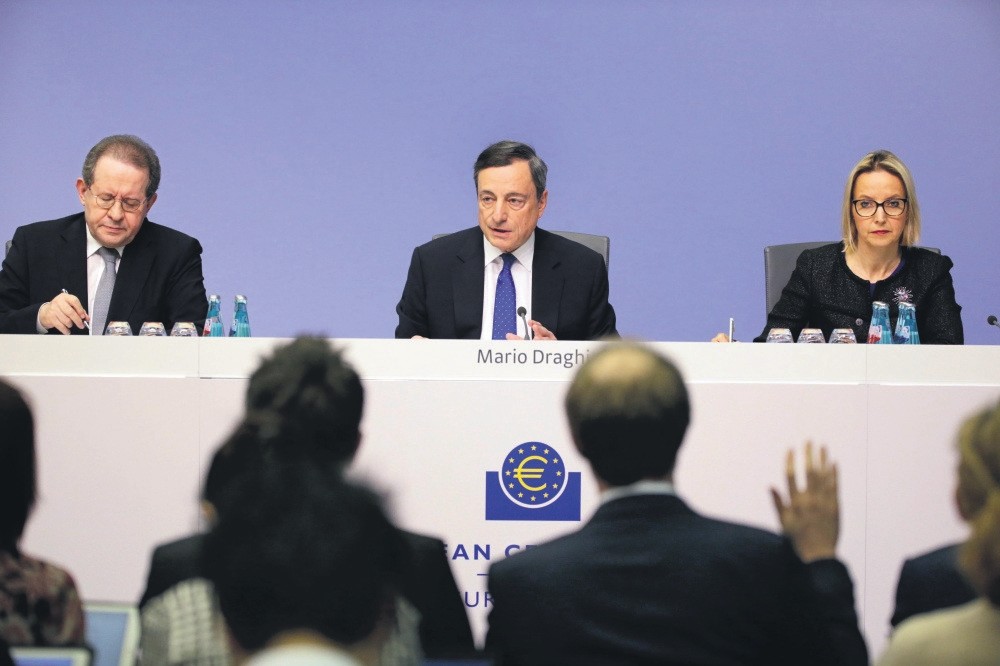 The European Central Bank has opted against any change to its stimulus programs unchanged even though economic growth across the 19-country eurozone appears to be picking up steam and inflation has risen to bank's targets.

In a press briefing Thursday after the bank kept policy unchanged, President Mario Draghi argued that the recent rise in the annual inflation rate to 2 percent - past the ECB's target of just under 2 percent - has come from higher oil prices, and not from fundamental improvements in the economy such as higher wages for workers.

He said underlying inflationary pressures across the region are still too weak for the bank to start the process of withdrawing its monetary stimulus efforts. Underlying inflation pressures, he said, "continue to remain subdued."

Core inflation, which strips out the volatile items of food, energy, alcohol and tobacco, has been stubbornly low over recent months at an annual rate of 0.9 percent, even as the headline rate has spiked to 2 percent.

In light of the near-doubling in headline inflation in the past few months, the ECB, which is the chief monetary authority for the 19 countries that use the euro currency, sharply raised its inflation projection for this year, to 1.7 percent from 1.3 percent previously.

The inflation estimates for 2018 was nudged up to 1.6 percent from 1.5 percent while the forecast for 2019 was left unchanged at 1.7 percent.

Though Draghi sought to sound some caution over inflationary pressures, he did point to a raft of economic indicators showing that the eurozone economy has picked up momentum and unemployment is falling.

Draghi said incoming data increase confidence that the economic expansion will continue "to firm and broaden" and that the balance of risks regarding growth has improved.

The eurozone economy grew 1.7 percent last year as the currency union recovers from a crisis over high debt that threatened to break it apart in 2011-2012. Unemployment has slowly fallen to 9.6 percent with big differences among member countries; German is at 3.9 percent but Greece, still struggling to adjust after piling up too much debt and being bailed out by other countries, has a painfully high rate of 23.0 percent. For comparison, the U.S. has 4.8 percent unemployment and a stronger recovery.

Draghi was speaking after the bank kept its bond purchases from banks unchanged at 80 billion euros ($85 billion) this month and 60 billion euros per month through the end of the year. It held its key short-term interest rate benchmark at zero, and maintained its rate on deposits from commercial banks at minus 0.4 percent. That is in effect a tax aimed at pushing banks to lend the money, not stash it at the ECB's super-safe deposit facility.

Draghi has also said the economy could use the support during a potentially turbulent political period. British Prime Minister Theresa May has said she will give official notice by the end of this month that Britain is leaving the European Union and its free trade zone. Britain does not use the euro but is a key trade partner for the EU members that do use the currency. Brexit means finding a new trade relationship with Europe, which could include tariffs on imports and exports, depending on how drawn-out negotiations go. The uncertainty alone could weigh on business activity by making executives postpone investment decisions.

Now that inflation has reached 2 percent, calls have arisen to start withdrawing the stimulus, particularly in Germany where the stimulus was never popular in the first place. German economists, media and politicians have bemoaned low interest rates on savings and pension products. Some have argued that the low rates bail out indebted governments such as Italy, which face less pressure to reduce budget deficits because they can borrow cheaply.

Draghi has pushed back against critics so far with the backing of an apparent majority on the bank's 25-member governing council. Nineteen of the members are the heads of central banks from the member countries - several of which need the stimulus far more than Germany.
Last Update: Mar 10, 2017 1:04 am
RELATED TOPICS