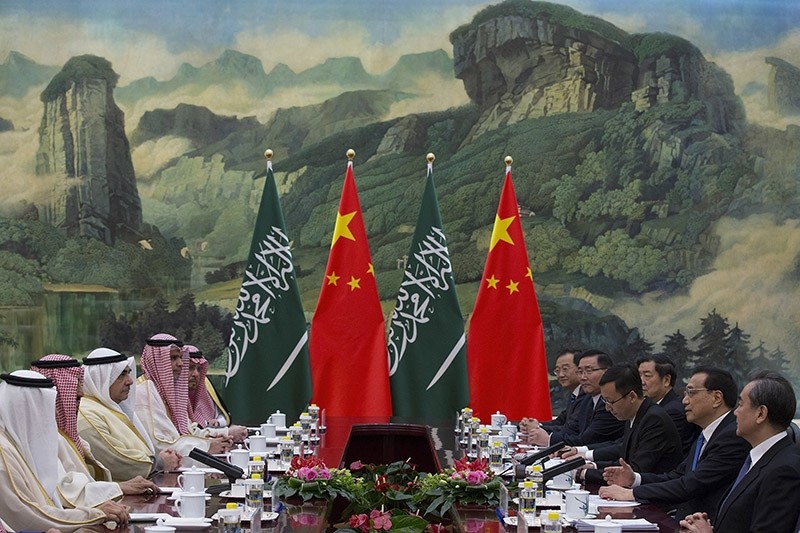 Saudi Arabia's King Salman met with China's premier on Friday, a day after the two nations signed a memorandum of understanding on investment cooperation valued at $65 billion.

Beijing meanwhile is rolling out a massive trade and investment initiative across Central Asia and the Middle East called "One Belt, One Road" that sees the desert kingdom as a regional linchpin.

Despite the eye-catching sum noted in the memo, the actual value of such commitments is usually much smaller once projects begin.

Saudi Arabia had been China's biggest supplier of imported crude oil before being overtaken by Russia last year, and the kingdom's state-owned oil producer, Aramco, is a partner with state-owned China Petroleum & Chemical Corp. The two operate a refinery in Fujian province along with other Chinese projects.

The signing of the agreement, which involves 35 separate projects, followed talks Thursday between Salman and President Xi Jinping, during which the Chinese leader said results of their burgeoning cooperation had already "surpassed our expectations."

Security ties between the two have also grown significantly, with the Saudi air force deploying Chinese unmanned attack drones and the two militaries holding joint counter-terrorism exercises in western China. Chinese navy vessels have also visited the Saudi port of Jeddah as part of increasingly active maneuvers in the Gulf of Aden.

However, China is also a close partner of Saudi Arabia's arch rival Iran, and has backed the Assad regime in the Syrian conflict, while Saudi Arabia has insisted on Assad's ouster and has supported the Syrian opposition, including militant groups.

The 81-year-old Salman's visit is part of a month-long swing through Asia. Accompanied by a 1,500-strong retinue of businessmen, princes and support staff in close to a dozen aircraft, he has already visited Japan, Indonesia, Malaysia and Brunei.

He was to travel next to the Maldives, but postponed that visit because of the spread of swine flu in the Indian Ocean island nation, according to the president's office.