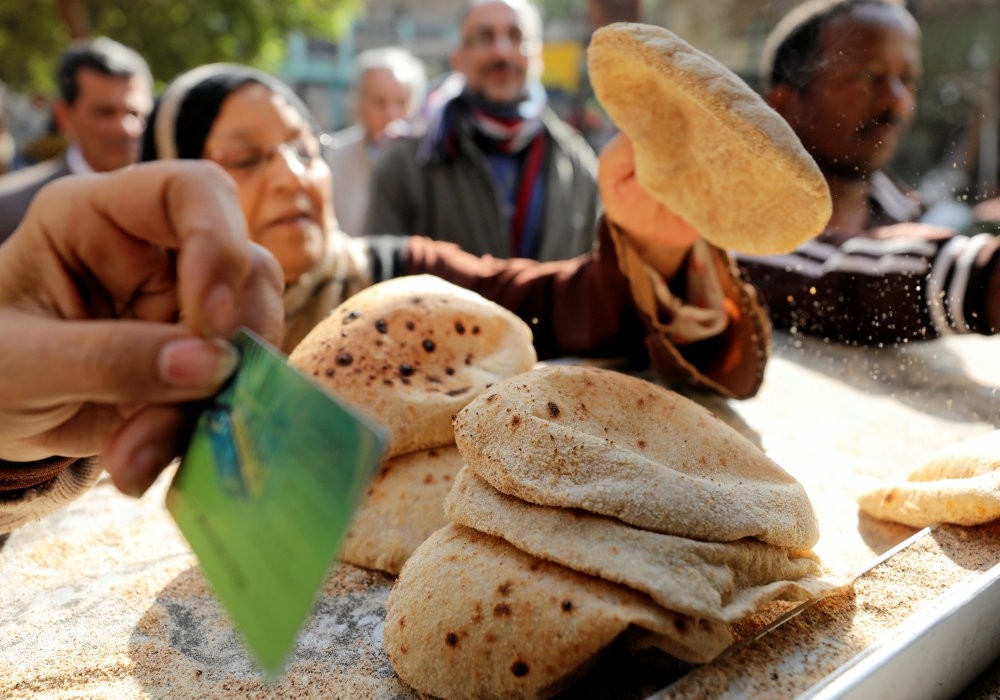 Forty years after the Sadat-era bread riots established the subsidy as a political red line, the pita is still offered for just 0.05 Egyptian pounds ($0.0028) per loaf, which today is about one-tenth its free market price.
by Mar 18, 2017 12:00 am

The acute political sensitivity of the availability and price of the staple leaves the Egyptian government with little choice but to ensure supplies, despite an economic crisis caused by six years of drift since an uprising ended Hosni Mubarak's 30-year rule.

In the past two weeks, state grain buyer GASC has purchased nearly 1 million tons of wheat, or more than 20 percent of what it bought all of last year, official figures show. Traders said the flurry of imports reflects a new reality in a country that already imports more wheat than any other: Egyptians are eating more of the state's bread, straining its finances and piling on the pressure to maintain supplies. Three Cairo-based traders said monthly state wheat consumption had jumped by up to 200,000 tons since November. The supply ministry put the increase lower and said extra imports were not due to consumption, but meant to boost stocks.

One trader said the two were linked: "Wheat consumption increased from 700,000 tons to 900,000 tons. So they need to increase their strategic reserve," he said, declining to be named because he, like the other traders, was not permitted to speak on the record. Living costs have exploded since the import-dependent country floated its currency in November, roughly halving its value and slashing many Egyptians' real income overnight. With inflation on food and beverages topping 40 percent in February, the notable exception is pita bread, a subsidised staple untouched since 1977 - when then-President Anwar Sadat provoked nationwide riots by announcing a cut in the subsidy. Last week rare protests took hold in cities across Egypt after a minor reform to cut down flour smuggling by bakers inadvertently left thousands without their daily rations. Although small, they showed what could happen if imports do not keep pace with demand or prices go up.

"The bread subsidy will not be touched," Supply Minister Ali Moselhy said at a snap news conference just after the protests. Forty years after the Sadat-era bread riots established the subsidy as a political red line, the pita is still offered for just 0.05 Egyptian pounds ($0.0028) per loaf, which today is about one-tenth its free market price.The currency float was the opening salvo in an ambitious economic reform program that includes tax hikes and energy subsidy cuts, in return for a three-year $12 billion IMF loan. Three bakers of subsidised bread said business had since boomed; one said he uses 30 bags of flour a day instead of 20.

"Rice and macaroni are expensive and there are no other alternatives," said head of the bakers' association Abdullah Ghorab, who represents over 25,000 bakeries countrywide and estimates consumption has jumped up to 15 percent.

Sohaier Saaed, a 40-year-old mother of four awaiting a fresh batch of bread, said she had gone from buying the pita now and then to getting it every day. "Prices have all gone up. We can't live like this," she said. Egypt's state grain buyer GASC, a global buyer of wheat so large it moves world prices on the back of its outsized tenders, appears to be struggling to keep up.The three grain traders, citing data from the GASC, told Reuters state wheat consumption was up from about 700-750,000 tons per month in November to around 900,000 currently. A supply ministry spokesman told Reuters the figure had been around 800,000 tons per month for the past three months, and that higher importing was part of a strategy to raise the level of reserves held in the country. The ministry put reserves this week at over 3 million tons, which it said is enough for four months.