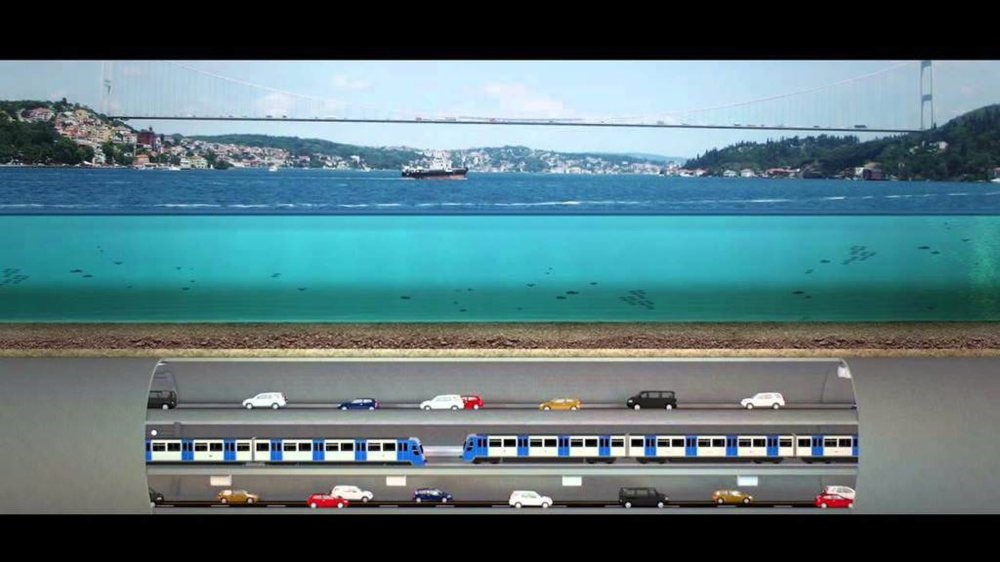 The 3-Story Grand Istanbul Tunnel will pass under the Bosporus Strait and consist of a metro line as well as a dual motorway.
by Daily Sabah with AA Apr 05, 2017 12:00 am

The result of the bid collected for the construction services of the latest mega project in Istanbul, the 3-Story Grand Istanbul Tunnel will be announced today. The first of its kind in the world, the tunnel will ease traffic congestion in Istanbul to a great extent and further develop Istanbul's transportation network

The bids submitted by four firms with regards to the preparation, project design, engineering and consultancy services of the 3-Story Grand Istanbul Tunnel Project, which is expected to ease Istanbul traffic, will be announced today.

According to Anadolu Agency (AA), the evaluation on the technical competencies of the companies that participated in the tender for the preparation, project, engineering and consultancy services of the 3-Story Grand Istanbul Tunnel Project by the Transport, the Maritime Affairs and Communications Ministry Directorate-General of Infrastructure Investments has been completed.

6.5 million passengers expected to use the line on a daily basis

The 3-Story Grand Istanbul Tunnel Project, which will go under the Bosporus Strait, will consist of a metro line as well as a dual motorway. The two-lane railway will run in both directions through the middle of the tunnel and a dual highway will enable rubber-wheeled vehicles to travel on highway lanes below and above the railway.

The first of its kind in terms of both size and concept, the first stage of this project will consist of a high capacity fast metro system that will start from İncirli 0n the E-5 axis on the European Side and reach Söğütlüçeşme on the Anatolian Side through the Bosporus Strait. The project's second stage will consist of a dual highway in each direction, beginning at the Hasdal intersection located on the TEM highway axis on the European side and connect at the Çamlık intersection on the Anatolian side.

The tunnel will be integrated with the TEM, E5 and North Marmara highways through nine subway lines. When the project, slated to be completed with the build-operate-transfer model within five years, is put into service, it will take 40 minutes to go from İncirli on Istanbul's European side to Söğütlüçeşme on the Anatolian side through a 31-kilometer high-speed subway line consisting of 14 stations.

As one of these mega projects, the 3-Story Grand Istanbul Tunnel will be the first three-story tunnel in the world and will consist of both a metro line and dual motorway. The fast metro line will enable a 40-minute commute from İncirli to Söğütlüçeşme and a 14-minute commute by car from the Hasdal intersection to the Ümraniye Çamlık intersection. The project is included in the 2023 Transportation Projection, an initiative to reduce Istanbul's traffic woes.

This project combined the "fast metro tunnel project," which will start from Bakırköy-İncirli along the E-5 highway and reach Söğütlüçeşme, similar to the Marmaray and the "highway tunnel" with 2x2 lanes, in order to relieve the traffic on the Fatih Sultan Mehmet Bridge, the second bridge on the Bosporus. Instead of separate tunnels, a single tunnel will be built for both the metro and a dual highway Bosporus crossing.

The tunnel will enable faster and cheaper transportation between the two sides of Istanbul, namely Europe and Asia. It will also provide easier and faster connections to ring roads; thus connecting all main arterial roads.

Lastly, the project is designed to leave residential areas undisturbed and support the TEM axis so as to avoid an urban eye-sore that would ruin the city's skyline.
RELATED TOPICS