Istanbul New Airport to contribute additional $79B to Turkish economy 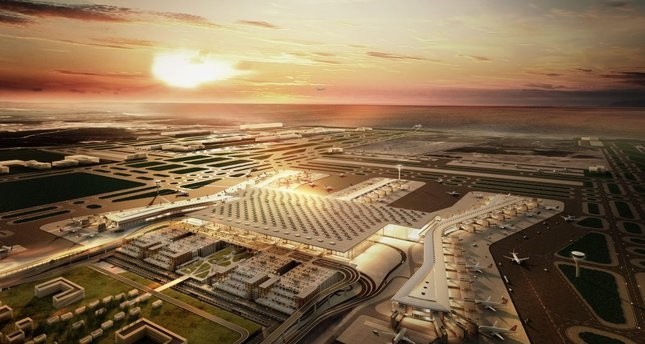 As the construction of the Istanbul New Airport continues in an accelerated manner, the terminal, which will accommodate 90 million passengers annually and three airfields, is planned to open in 2018.
by Daily Sabah with AA Apr 06, 2017 12:00 am

Istanbul New Airport, with an investment worth 10.2 billion euros, will contribute an additional $79 billion to the local economy while jobs and serving 200 million passengers annually once fully operational

Transport, Maritime and Communications Minister Ahmet Arslan said that the third airport currently under construction in Istanbul will contribute greatly to the Turkish economy and to employment rates, noting that it will make very serious contributions to trade and is expected to generate 4.9 percent to the gross domestic product (GDP), an additional $79 billion obtained just from the airport.

Minister Arslan told Anadolu Agency that Turkey's aviation sector has made great advances due to the emphasis placed on aviation by the Justice and Development Party (AK Party), asserting that the liberalization of the sector allowed it to expand, pointing to President Recep Tayyip Erdoğan and Prime Minister Binali Yıldırım's instructions to make airlines the way of the people.

Emphasizing that the Transport, Maritime and Communications Ministry has increased the number of airports in Turkey from 25 to 55, Arslan said: "Everywhere in Turkey has become accessible by plane. We have been able to go to all corners of the country. This is a very serious indication of the distance we have covered. While 35 million passengers from Turkey used to fly in and out of the country in the past, today we have reached 180 million."

'Turkey will have a say in the world of aviation'

Stressing that Turkey will "have a say" in the international aviation industry, Minister Arslan said that the decision to build the Istanbul Third Airport was made in the context of the global corporate interests of Turkey's national flagship carrier Turkish Airlines (THY), stressing that -- in that sense -- the airport is really a masterpiece. Arslan said: "We are draining the swamps where we have coal mines and are bringing those resources to a new area where we are investing 10 billion euros. We are making this investment by means of the private sector by forming public-private partnerships, and we have plans to generate 22 billion euros in revenue for the 25-year operation," Arslan said.

Arslan indicated that the world has been watching this airport with envy, saying: "We care about the Istanbul Third Airport, and so does the [entire] world. [Global competitors] sometimes watch with envy and sometimes with jealousy. This newest airport will serve 200 million passengers a year."

Pointing out that the airport will function as a "transfer airport," Arslan suggested that no matter where in the world planes go, they will have transfers and connections in Turkey, noting that income is generated from the landing of aircraft in Turkish airports, by passengers spending time between flights and also those who shop: "Therefore, transfer airports that operate around the world make the respective countries centers of the world of aviation, making major contributions to the growth of the respective country in terms of creating added value and generating income," Arslan added.

Minister Arslan stressed that the third airport will make a major contribution to Turkey's growth, development and economy. Indicating that world trade and trade mobility are spreading from the epicenter of the airport's location, Arslan said that since the Istanbul Third Airport is expected to become a center of the country's aviation sector that generates income for Turkey, it will enable tradespersons, durable and nondurable goods from a wide range of industries, raw materials and finished products to expand from the geographical point of the Istanbul Third Airport. Arslan also highlighted that this airport means that an investor, a person making an investment, can easily come to Turkey from anywhere in the world, monitor his/her investment, make necessary transactions and travel to other areas on the same day.

Indicating that the Istanbul Third Airport will boost the Turkish economy, Minister Arslan noted that it will make a very serious contribution to trade and should generate 4.9 percent of Turkey's gross income -- an additional $79 billion obtained just from the airport.

According to Arslan, when the first phase of the airport is finished next year, employment for 100,000 people will be provided per year, and when the airport reaches full capacity in 2025, it will create job opportunities for 225,000 people per year. Stressing that its employment dimension is an important argument and a substantial indicator on its own in terms of contributing to the country and its economy, Arslan also said that the third airport would improve people's lives and provide them with jobs.

"Providing employment is not our only concern. We also aim to expand our country's trade volume and economic vitality with the help of this airport. We want to put Turkey among the top 10 economies in the world in 2023, and this airport is a very crucial element in achieving this goal," Arslan concluded.

When the first phase of Istanbul's new airport is completed, it will have a capacity for 90 million passengers. Taking into consideration the fact that per capita expenditure in tourism the sector exceeds $700, the share of the expenditures by these passengers is expected to be above $7 billion, even if 10 percent of them visit Turkey as tourists.
RELATED TOPICS