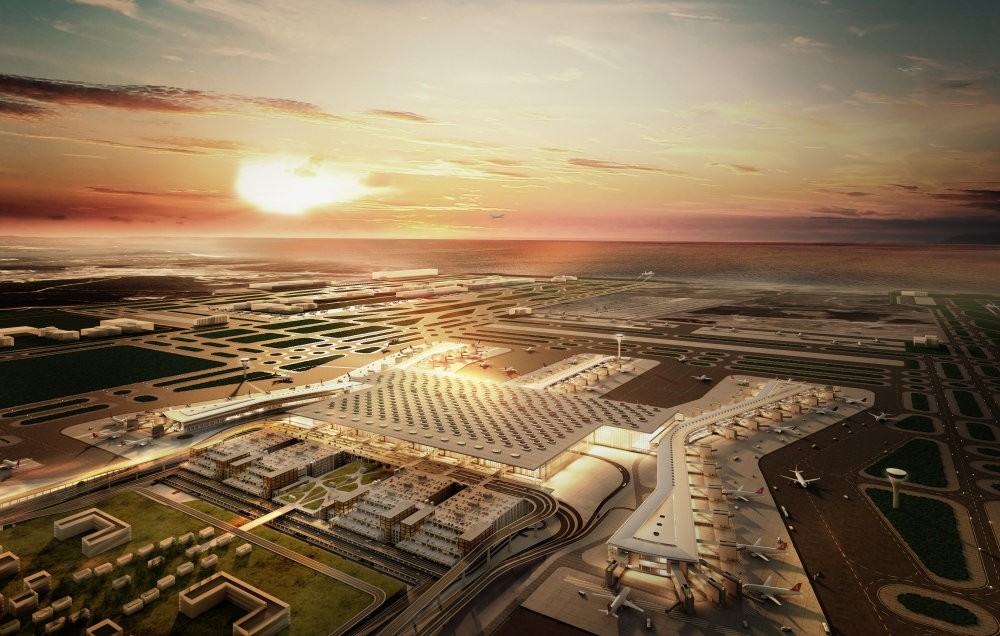 The terminal of the Istanbul New Airport is expected to provide opportunities for flights to more than 350 destinations for nearly 100 airline companies.
by Daily Sabah Apr 12, 2017 12:00 am

Having already greatly contributed to the Turkish economy with employment opportunities and production operations, Turkey is determined to introduce through Istanbul New Airport its aviation industry to airline companies that are yet to fly to the country

Yusuf Akçayoğlu, the CEO of the IGA Airport Construction firm that is heading the operations, said that nearly 50 airline companies currently offer flights from Atatürk Airport and that number will reach 100 once the Istanbul New Airport opens.

"We want to attract airline companies that have not included Turkey on their list of destinations and are proud to offer our services to them. The marketing group within our own business is currently working on this issue," Akçayoğlu said.

Speaking to local reporters, Akçayoğlu noted that construction of the Istanbul New Airport kicked off on May 1, 2015 while he emphasized that the number of employees working at the airport was around 20,000 in winter.

He also informed that the current figure is around 24,000 but it was expected to reach nearly 30,000 by July or August, thanks to new recruitments brought in by sub-contractors.

Noting that they do not expect construction efforts on the new airport to affect growth in relevant sub-sectors, Akçayoğlu said, "We had an independent organization conduct a study that revealed interesting statistics regarding the Istanbul New Airport's contribution to the Turkish economy."

The figures are derived from real figures. The Istanbul New Airport will generate economic gains that will constitute 4.89 percent of Turkey's gross domestic product and provide employment for 1.5 million people in 2025," he continued.

Currency volatility has not affected the construction

Speaking about the rising exchange rate, Yusuf Akçayoğlu said, "Although some items have increased in cost due to the exchange rate, we are hedging it. Since some spending is in Turkish lira, there has been stabilization. Spending in foreign currency was also kept at a certain rate."

Akçayoğlu stated that a large part of the expenditures are lira-based since they target a locality rate of 80 percent in the project, stressing that they have not been affected by the fluctuation in foreign currency.

Timely completion of project of priority

Akçayoğlu pointed out that they are spending all their energy to complete the Istanbul New Airport and that they will consider its return after the project becomes operational.

Regarding a question of whether they will be interested in projects abroad, Akçayoğlu assured that they will surely carry out projects in other countries, noting that international projects set a precedent of excellence for aviation facilities worldwide.

He also underlined that currently; the most important item on the company's agenda is timely completion of the project and opening the Istanbul New Airport to customers in 2018.

Additional $79 billion to the Turkish economy

Transport, Maritime and Communications Minister Ahmet Arslan previously told that the Istanbul New Airport currently under construction in Istanbul will contribute greatly to the Turkish economy and to employment rates, noting that it will make very serious contributions to trade and is expected to generate 4.9 percent to the gross domestic product (GDP), an additional $79 billion obtained just from the airport.

Minister Arslan said that Turkey's aviation sector has made great advances due to the emphasis placed on aviation by the Justice and Development Party (AK Party), asserting that the liberalization of the sector allowed it to expand, pointing to President Recep Tayyip Erdoğan and Prime Minister Binali Yıldırım's instructions to make airlines the way of the people.