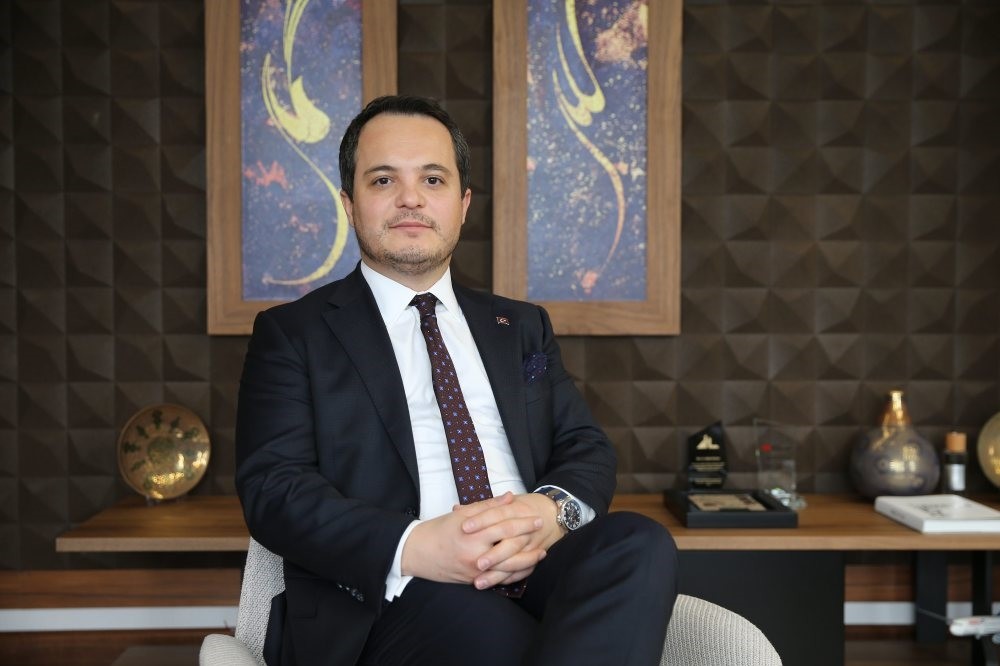 President of the Investment Support and Promotion Agency of Turkey (ISPAT) Arda Ermut leads efforts to create an investor-friendly environment in Turkey.
by Daily Sabah Apr 21, 2017 12:00 am

Turkish business people are emphasizing that the Turkish public voted for stability, expressing their expectations for a better investment environment while foreign investors have also conveyed positive messages, emphasizing the necessity of acceleration in introducing reforms

Prior to Sunday's referendum, members of the business world voiced their expectations for a reform-oriented leadership following the constitutional referendum, stressing that the new presidential government system will pave the way for a more investor-friendly environment that will overcome the majority of bureaucratic hurdles. A week before the referendum, the Turkish lira spiked against the dollar and the stock market saw a jump, suggesting that the markets banked on a "yes" vote in the referendum outcome.

Right after the referendum, members of the Turkish business world highlighted that investors now see more clearly a positive financial outlook and the result ensured predictability for investors. Moreover, foreign investors drew attention to the necessity of the reforms to create a more stable investment environment that will boost foreign direct investment flow to Turkey. Arda Ermut, the president of the Investment Support and Promotion Agency of Turkey (ISPAT), said that the markets expected the "yes" vote to triumph in the referendum, highlighting that international investor feedback has been positive since then, adding that along with investors, they expect steps to be taken swiftly in the upcoming period. "After all, the constitutional reform was a promise and, of course, investors will see that this promise will quickly be realized and this will be reflected in investments. I think that we will hopefully start reaping the benefits of the result in 2017," Ermut told Daily Sabah.

Saying that the voter participation rate in the April 16 referendum was quite high and that this demonstrates that democracy is alive in Turkey, ISPAT President Arda Ermut noted that the the agency will intensively express what the system will bring to the table as well as the impact of the results on the investment environment with programs to be organized soon.

"We will tell investors that this system is not a system of 'one-man rule or an authoritarian system' but is rather a much more effectively governed state, also reiterating its effects on the investment environment," Ermut said, likening the constitutional amendment package to a newly tailored dress and emphasizing that the reform is a step that should have been taken previously. Noting that ISPAT has entered a productive period with their projects, Ermut said, "As long as new system-related structural changes are made; especially with regard to the investment environment, we will have more concrete material to present to investors."

Working on the improvement of the investment environment in Turkey and striving to facilitate the bureaucratic processes foreign investors encounter during an investment, ISPAT regards the new presidential government system as a great step to accomplishing reforms that will draw in more investments to Turkey.

Stressing that the bureaucratic processes constitute hurdles for investors everywhere around the world, the ISPAT president noted that Turkey has alleviated these processes to a great extent in the last 10 years and the new system will provide more space to bring less bureaucracy-stricken investment processes.

Prior to the referendum, all actors campaigning underlined that Turkey will be saved from overwhelming bureaucracy, which investors, exporters and citizens complain about. But the most concrete consequence of eased bureaucracy will be the accelerated public reforms. "The presidential government system will be the biggest leverage of the necessary and long-awaited public reforms, therefore, it will devise a more efficient and effective public body," Ermut said.

The requirement of a structural change to devise a more investment-friendly environment was already acknowledged among the community of investors, a point that was empharically stated by ISPAT during the pre-referendum period.

Stressing that Turkey's referendum process was mostly discussed on a political basis, particularly because of the elections in Europe, ISPAT President Arda Ermut noted that the true necessity for a structural and systemic change in Turkey was underemphasized.

When asked about the kind of policy Turkey should or will follow in a global trade environment that is torn apart amid the protectionist West and pro-globalization East, Ermut said Turkey should strive to diversify its investor portfolio and investable sectors.

ISPAT President Ermut recalled that foreign direct investment to Turkey came in mostly from Europe until 2010 with 75 percent but during the post-2010 period this percentage decreased to 65 percent while the investments from Asian, Gulf and Middle Eastern countries soared, which demonstrated how Turkey has accomplished to diversify the range of foreign investors. In that regard, the ISPAT president underscored that Turkey should continue in the new period to bring in investments from the more globally-focused Asian countries.

Furthermore, one of the biggest gains of the new system, which will bring a strong executive body, will enable ministers to focus on the issues of executive governance instead of engaging in politics, according to Ermut.

Ermut informed that international investors look at qualities such as the level of efficiency in bureaucratic operations, swift decision-making and implementation, improvement in public reform and market predictability that comes with political stability, adding that improvements will be made in these areas in the future.

Pointing out that markets were expecting the "yes" result in the referendum, and that feedback from the international investors was positive following the referendum, Ermut continued by saying: "We expect the next steps to be taken quickly, along with clarification of what will be done regarding legislation and other reforms in the next period, as well as who will take part in the system. This is what investors expect as well."

"After all, the constitutional reform made a pledge and now the promises should be put forward in exchange. Of course, investors will see that this promise will be realized quickly and this will also be reflected in investments," Ermut said, suggesting that the effects of this positive atmosphere will be seen in the following period.

Declaring that investments coming from Russia are increasing again despite being interrupted by the jet crisis of 2015, Ermut indicated that he hopes further investments will come from both there and neighboring countries. He also underlined that macro projects such as the Çanakkale Bridge and the Karapınar Renewable Energy Resource Areas (YEKA) project in solar energy serve as important leverage, as these are very significant projects in terms of attracting investors and also provide partnership opportunities for the state. Ermut said investors are already showing great interest in the 1,000 megawatt (MW) wind energy YEKA project, noting that: "Thanks to investments we drew with these projects, we are also indirectly attracting investments in other parts of the value chain. The solar and wind YEKA tenders not only require electricity production but also equipment production conditions," Ermut said. "In this regard, we will also acquire some investments related to equipment production and we will be able to attract other investments in the supply chain through investments in equipment production. Hopefully, we will use this chain effect."

Ermut also added that they will continue to see investors from different parts of the world invest in similar macro projects with a value added effect in Turkey.