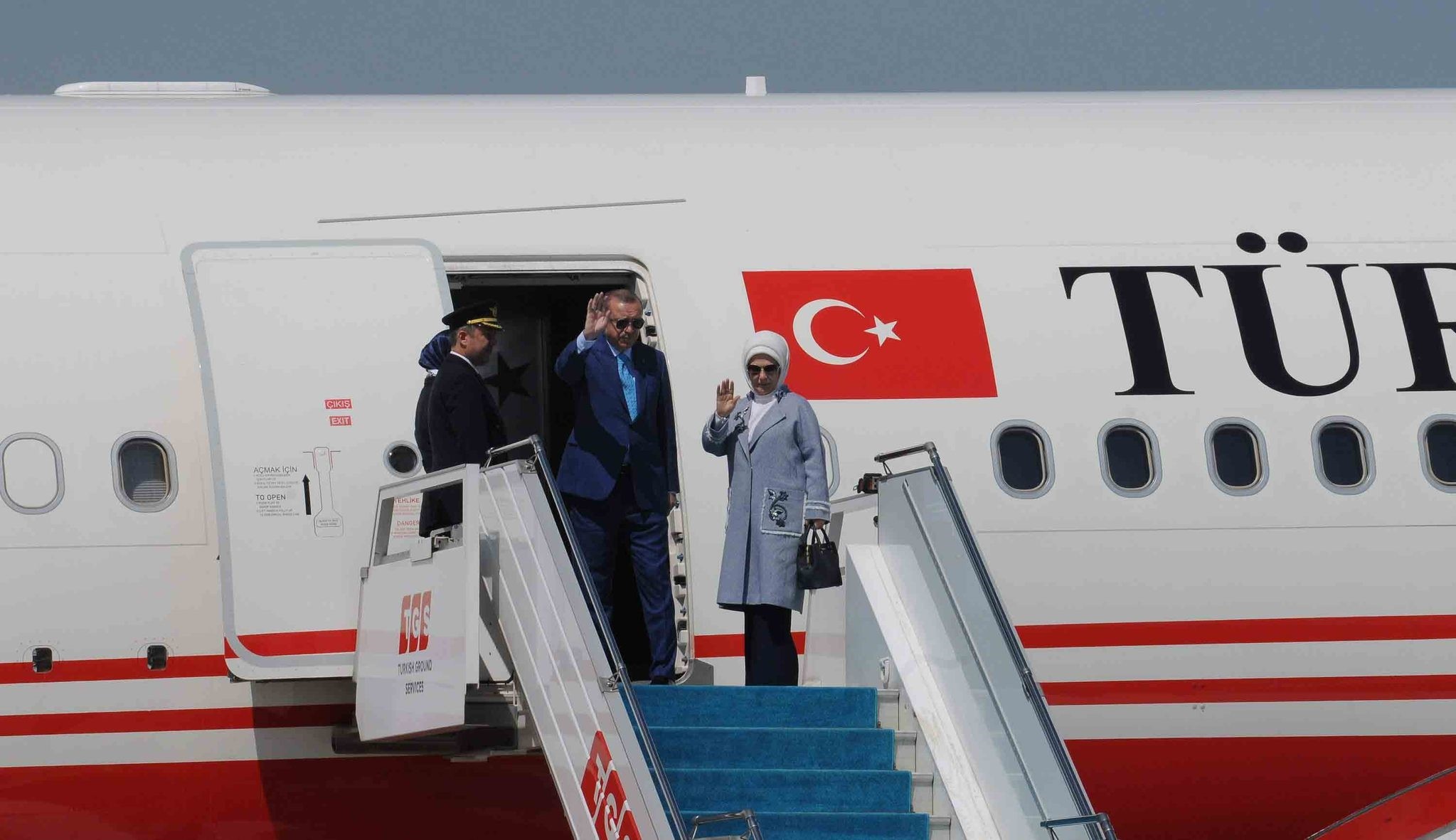 President Erdou011fan and First Lady Emine Erdou011fan wave before their departure for an official visit to India.
by Daily Sabah with AA May 01, 2017 12:00 am

As President Erdoğan has pledged better bilateral relations with India ahead of his visit, the Turkish business world is expecting greater economic ties, more direct investmetnt and solutions to existing problems

Ahead of his visit to India, the first leg of scheduled trips to Russia, China and the U.S., President Recep Tayyip Erdoğan vowed Saturday to further improve bilateral relations with the country during his two-day trip. This will mark Turkey's first presidential-level official visit to the South Asian country. Speaking to India's TV channel WION, Erdoğan said he believes that mutual deliberations between the two countries will be enriched and further deepened as a result of his visit, vowing to boost relations with India. Indicating that the trade volume between Turkey and India currently stands at around $6 billion, the president said these numbers are not in favor of Turkey.

He also expressed Ankara's belief that Turkey can obtain a much more favorable balance of trade volume with India in the coming months on the basis of a win-win scenario, adding that India and Turkey can take bigger steps moving forward in terms of bilateral relations.

Bilateral trade and economic cooperation are expected to be the main topics of discussion during the visit, as President Erdoğan is set to attend the Turkey-India Business Forum on the first day. He is also expected to meet with his counterpart President Pranab Mukherjee, deputy President Hamid Ansari and Prime Minister Narendra Modi.

India, which has the second largest Muslim population in the world, is a member of the G20 and one of the five major emerging national economies (BRICS) countries alongside Russia, Brazil, China and South Africa.

Indicating that the share of bilateral trade is around 2 percent of Turkey's $350 billion foreign trade volume, Çelebioğlu said this figure is less than 1 percent of India's total trade volume of almost $700 billion. She also added that these numbers indicate that the two countries are quite below their potential.

Noting that India is on the way to becoming the largest market in Asia, Çelebioğlu said it stands among the world's top 10 economies in terms of both gross domestic product (GDP) and purchasing power parity rankings, citing its young population of 1.3 billion, a rapidly growing middle class, fast urbanization and economic transformation.

Underscoring that the needs of India have to be analyzed correctly, Çelebioğlu said she believes Turkey could surpass some of India's top 25 trading partners; namely, Thailand, Malaysia, South Africa or Australia.

Going on to say that Turkish companies have the potential to dominate the service sector in terms of infrastructure and superstructure, Çelebioğlu said India may benefit from Turkey's experience in public-private partnership investment models in the field of civil aviation and healthcare.

She also said that Turkish entrepreneurs could help write the same success story seen in the Mediterranean basin, stressing the nascent state of the Indian tourism sector.

"More slots could be provided by the two countries' officials for both Turkish and Indian airlines to stimulate tourism activities," she added.

In addition to the advantages offered by the Indian markets, Çelebioğlu also addressed the challenges Turkey faces, saying practices in India vary from region to region while indicating that there are a lot of issues in terms of foreign exchange rates and tax regulations in addition to limitations and protections on certain sectors for foreign capital inflows.

Moreover, Çelebioğlu stressed that a free trade agreement is needed between Turkey and India, saying the current trade agreements should also be updated for the sake of businesses.

Turkey's Commercial Counsellor to India Vural Çekinmez said Turkish companies wanting to enter the Indian market are provided a wide range of support by Turkish officials in New Delhi. Moreover, he also said President Erdoğan's visit could be one of the most comprehensive meetings in India in recent years.

"This visit will provide significant benefits for both Turkish businesspeople who already have investments in India and those looking to potentially invest here,"Çekinmez said.

Further, he said that the "Made in India" initiative introduced by Indian Prime Minister Modi shows solid resolve for boosting the country's investment climate, removing the red tape and attracting foreign investors with an extensive approach. "Efforts to set up industrial corridors between major cities and the project to build 100 'smart cities' have also made the country more attractive for doing business," he said.

tating that India was only able to attract under $1 billion in foreign direct investment (FDI) in the beginning of the 1990s, Çekinmez said the country has generated around $310 billion in FDI between 2000 and 2016, becoming the world's third ranking FDI destination. He also added that there are some 1,300 Japanese and 400 South Korean companies operating in India but only a few Turkish ones.

"Thus, a Turkish community that can create a synergy has not been established yet. The Turkish business cycle needs to be active in India to do business in this country," he said. He also recommended Turkish firms that are considering entering the Indian market to seek professional support from consultants in order to avoid difficulties. "One of the biggest misunderstandings about India is that the country has a homogeneous market. Yet, the Indian market is actually quite heterogeneous with multiculturalism, distinct consumption habits, varied regulations and taxable provinces," he said.

Moreover, in this respect, he said it would be logical for Turkish companies to enter the market by focusing on a specific region rather than expecting to operate in the entire Indian market in the first phase.

According to the Turkish Statistical Institute (TurkStat), Turkey's exports to India totaled $650 million in 2016, while imports from India totaled nearly $5.8 billion.

Moreover, according to the Economy Ministry of Turkey, India was identified as one of Turkey's target countries for developing trade ties in the 2016-2017 period. India, which is Turkey's second largest trading partner in the Asia-Pacific region, is one of the fastest growing free market economies with a sustainable development model, which is built on the solid foundation of entrepreneurial energy, youthful dynamism and creativity.

In terms of the economic bilateral relations between the two countries, Turkey ranked 15th in India exports in 2016 and 42nd in imports. The highest trade volume between the two countries was recorded in 2014, reaching $7.48 billion, according to data compiled by the Economy Ministry of Turkey. Furthermore, Turkey's exports to India in 2016 reached $652 million. Mineral materials, vegetable products, basic metals, artwork, machinery and mechanical devices were the major products exported to India. On the other hand, Turkey's imports from India were recorded as $5.7 billion, among which means of transport, mineral materials, machines and mechanical devices were the major products imported. The trade volume of the two countries was recorded as $6.4 billion according to the Economy Ministry of Turkey, while the trade balance was $5.1 billion, in favor of India.