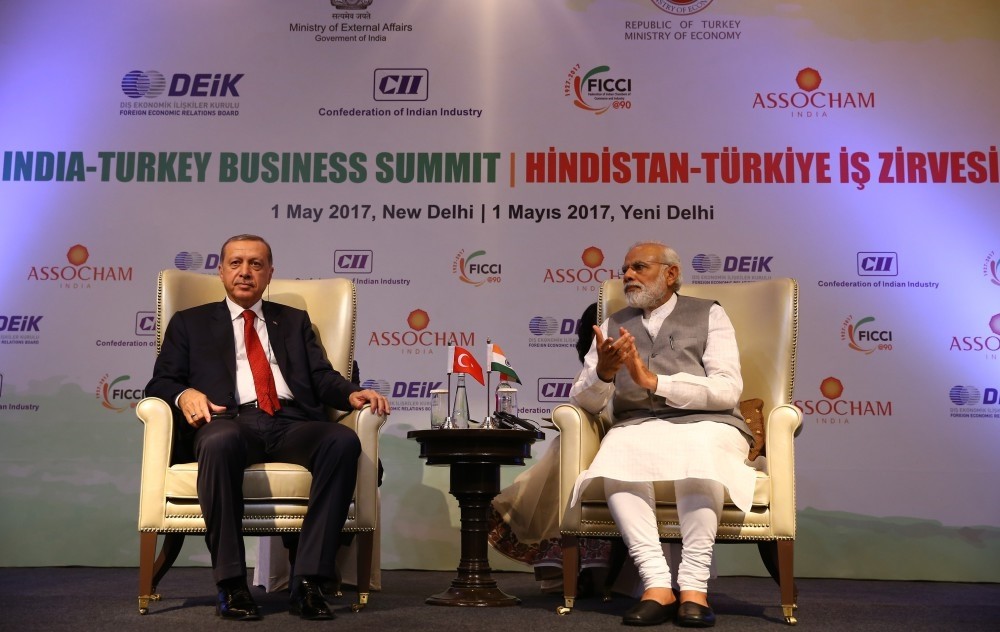 President Erdou011fan attended the Turkey-India Business Summit in New Delhi together with the Indian Prime Minister Narendra Modi and discussed business opportunities that could benefit both countries.
by Daily Sabah May 02, 2017 12:00 am

President Recep Tayyip Erdoğan's two-day visit to India not only set a number of goals to boost bilateral trade between Turkey and India, but also outlined plans to carry out trade transactions in local currencies

President Recep Tayyip Erdoğan's busy May schedule kicked off with a visit to India where he predominantly discussed the amelioration of economic cooperation in areas such as energy, construction, tourism and trade. During the meetings featuring economic cooperation between the two countries, both President Erdoğan and India's Prime Minister Nerandra Modi emphatically stated the necessity of improving trade relations, expanding trade volume and opening up new areas of partnership. One of the most highlighted topics of the meetings was that of bilateral trade in local currencies, as both Turkey and India are greatly affected by currency fluctuations.

During his speech at the Turkey-India Business Forum held at the Taj Palace New Delhi Hotel, the Turkish president expressed his pleasure for attending the program with Prime Minister Modi and expressed that he hoped the meeting would be auspicious to all parties, highlighting the fact that in order for both countries to realize their potential, listed among the great emerging economies of the world, they must take fuller advantage of the potential in bilateral trade. To that end, the president noted the importance of alleviating currency pressure by conducting export and imports in local currency.

"In order to maximize this potential, we need to rapidly build the necessary infrastructure in critical sectors, especially finance, customs and tax legislation. We also need to reduce the currency pressure on our trade," Erdoğan said. "So, we must import and export with our own national currencies. It will be useful for the relevant units to meet in this regard."

Erdoğan informed that Turkish firms have invested $212 million in India, while Indian companies have invested $110 million in Turkey, stating that these figures are much higher given the investments that both Turkish and Indian companies make through third country institutions, adding that Turkey's potential as the 17th largest economy of the world as well as India, the world's 7th largest economy, are well above these figures.

"We are ready to provide any kind of convenience to the Indian companies that want to invest in our country through our Investment Support Agency and other institutions," Erdoğan said, stressing that Turkey is in a suitable position to be a production and trade base for a wide geographic area, especially in Europe, Central Asia, the Black Sea region and the Middle East, besides its own market.

Noting that the meeting, which has brought together representatives of the Turkish business world with the Indian business world, will be a milestone for a new era, Erdoğan said, "Since India became independent, the atmosphere of friendships and cooperation has always dominated our relations. We want to deepen, diversify and increase economic cooperation. Our determination in this matter is complete and sincere."

Stressing that he believes that Indian Prime Minister Modi, whom he met prior to the forum, also shares the same thoughts about the development of commercial and economic relations between the two countries, Erdoğan said he will have opportunities to fully discuss these issues with Modi.

"We would like the Turkish-Indian Business Council to become a more effective mechanism to contribute to the enhancement of our bilateral economic partnership and mutual investments," Erdoğan said, adding that the continuation of the Turkish-Indian Joint Economic Commission meetings held in the beginning of 2014 and the start of free trade agreement talks will also accelerate the development of economic and commercial relations between the two countries.

President Erdoğan informed that it will be useful for the Federation of Indian Chambers of Commerce and Industry to open liaison offices in Istanbul and the Turkish Exporters' Assembly and Foreign Economic Relations Board (DEİK) in New Delhi.

Highlighting that there are opportunities to further contribute to the strengthening of communication between the private sectors of both countries, Erdoğan said, "It is pleasing that our bilateral trade volume with India reached approximately $6.5 billion by the end of 2016."

"We think that this figure will increase day by day and will soon reach its real potential. However, it is also true that the bilateral trade volume is unbalanced and that it has been a disadvantage for our country for many years," Erdoğan said. "It is very difficult for our country to maintain this imbalance, which was realized as $652 million in exports and $5.8 billion in imports as of last year. In this respect, we consider it important to increase mutual investments and take rapid steps to balance trade."

Nuclear power another area for collaboration

Indicating that India, which participated in the G20 summit with Turkey, is one of the biggest democracies in the world and one of the largest and fastest growing free market economies, Erdoğan said the country has covered important distances in high technology, computer software and space exploration under the leadership of Indian Prime Minister Modi, adding that Turkey is following these developments with admiration.

Turkey wishes to develop cooperation with India in these areas and the two countries' economies complement each other, Erdoğan said, adding that India and Turkey will be able to enter third country markets with joint investments.

Emphasizing that the Turkish private sector has shown important success in opening to world markets, especially in the field of construction, President Erdoğan explained that Turkey owns the world's second largest contracting sector with a business volume of $342 billion undertaken to-date, placing Turkey among the world's 250 largest contractors. Turkey has 42 companies. Suggesting that the "100 Smart City" and "Build in India" projects realized by the Indian government will make a major contribution to India's development and urban transformation, Erdoğan added that Turkish contractors can also contribute to these projects.

President Erdoğan explained that tourism is another area for fostering cooperation between India and Turkey, saying: "Twenty-five million foreign tourists visited our country last year. This is not an ideal figure for us. Among them, the number of Indian tourists is only 79,000. However, we expect more tourists from India."

President Erdoğan noted that tour operators could be encouraged by giving weight to the promotion, recalling that there has been a significant increase in the number of Indian families who have organized weddings in Turkey and that by developing all these opportunities, they expect more Indian tourists to visit the country in 2017, especially honeymooners.

Referring to the importance of improving the transportation within the scope of increasing the number of tourists, President Erdoğan said, "Turkish Airlines (THY) and Atlasjet Airlines want to increase the number of flights and destinations to India. It will be on point to develop cooperation between Air India, THY and other aviation companies in which common flight arrangements are in place."

Erdoğan said the development in air transport will serve common interests, especially in transforming tourism into one of the driving forces of development, expressing his wishes for the business forum to provide new momentum for economic and commercial relations between Turkey and India.

Speaking at the same meeting, Indian Prime Minister Modi pointed out that both the Turkish and Indian economies have solid foundations, expressing his hopes for the joint economic future.

Prime Minister Modi said the bilateral trade volume between Turkey and India, which are listed among the world's 20 largest economies, has shown an impressive increase in recent years, noting: "The foundations of the Turkish and Indian economies are very solid. For this reason, I can say that we are very optimistic about our economic future."

He recalled that the Turkish construction and infrastructure companies have succeeded in realizing major investments in other countries. "Our infrastructure needs are incredibly vast. Turkish companies can easily be a part of this task," Modi said, adding, "For example, we aim to build 15 million houses by 2022. To do this, we have changed our policies regarding the construction sector."

Modi said they will renew some sectors such as energy and transportation, with the opening of new ports and the modernization of old ports on the agenda.

Modi noted that the number of Indian tourists going to Turkey has increased in the last few years and that tourism should be encouraged on both sides, adding that the two countries can also collaborate in the field of textiles.