Turkey, Russia agree on lifting all trade restrictions, except for tomatoes 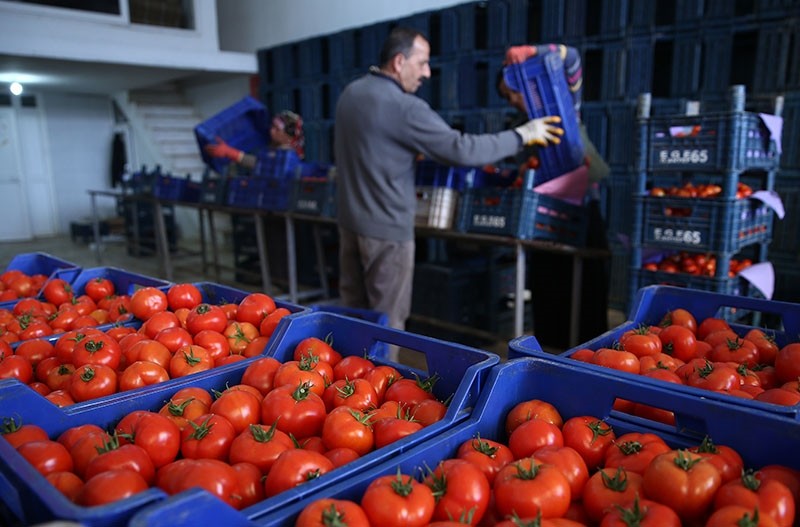 President Erdoğan and his Russian counterpart Putin came up with solutions to bolster cooperation in energy and trade restrictions on Wednesday. The only item remaining open to negotiation, the tomato still lingers over trade relations like a phantom of the previously strained ties

The second destination on President Recep Tayyip Erdoğan's itinerary of series of meetings with world leaders in May, Russia staged a productive meeting between President Erdoğan and his Russian counterpart Vladimir Putin on Wednesday in Russian Black Sea resort tow Sochi. The two leaders reached agreement on a number of topics such as the joint investment fund of $1 billion, the TurkStream project, Akkuyu nuclear power plant and tourism. However, an agreement is yet to be reached on lifting the ban of tomato exports from Turkey to Russia.

Speaking at the joint press conference, President Erdoğan highlighted that a great deal of issues were discussed between the two countries in the meeting that brought together the two leaders for the fifth time over the last nine months.

Erdoğan announced that the meeting resulted in a decisive will to liberate the restrictions that hinder further burgeoning of bilateral trade ties.

"Today, we have agreed on all topics including food, textile, energy and agriculture, except the tomato. Of course, we want Turkish tomato to enter the Russian market. The fact that it is both cheap and delicious compels us to recommen-," he said in a spiritual tone and added, "But currently, we are in a transition period. By coming up with solutions, I hope we will prepare a strong ground that can solve that issue as well," Erdoğan said in reference to the "tomato issue," which has been a major topic of negotiations between Turkey and Russia since the jet-downing crises in November 2015.

"Of course, we are not going to close our gates to the Turkish tomato," Putin added and continued, "But there is a transitional investment process going on here, we need to consider the investor who took out loans and we will lift the ban on tomato import from Turkey once the process is concluded."

In late December 2016, President Erdoğan called on Turkey's main trade partners, Russia, Iran and China, to use national currencies as the medium of exchange for bilateral trade. His call was echoed by Russia and Iran and the central banks of these countries announced that there is no barrier in conducting trade in national currencies.

The issue was discussed again in the Erdoğan-Putin meeting on Wednesday.

"We have decided to strengthen our trade and use our national currencies," Erdoğan stated and his statement was backed by Putin, who revealed that the prospects of using national currency were on the table as well.

We were able to stop the decline in our trade and experience an increase by the year," President Erdoğan said, pointing out that there is a $110-billion deal from both sides, and that they have agreed on the completion of the joint investment projects amounting to $1 billion.

Noting that Russia exports natural gas, coal and oil to Turkey, Erdoğan said that they have also discussed the TurkStream project, which includes two lines transported from the Black Sea – one through Turkey and the other directly to Europe.

During the press conference held following the two leaders' meeting, Putin said the period of normalization in Russia-Turkey relations after the crisis has been accomplished and both countries are determined to strengthen multifaceted bilateral cooperation. The two leaders discussed the limitations and barriers impeding trade and investment, Putin said. Mutual trade with Turkey has stopped falling, Putin said, and it is recovering now, which is reflected in the increasing volume of Turkish exports to Russia.

According to TurkStat, Turkey's exports to Russia rose by 40.9 percent to $498.1 million in the first quarter of this year compared to the same period in 2016.

Stressing that Turkey imports 55 percent of its natural gas supply and 18 percent of its oil from Russia, Putin emphatically stated the necessity for the continuous partnership energy given the fact that Turks and Russians are building the Akkuyu Nuclear Power Plant and working on the TurkStream project, which will carry Russian gas to Europe through Turkey.

At the joint press conference, Putin also announced that Russia will launch a mutual investment fund with Turkey of up to $1 billion. During President Erdoğan's meeting in March 10, a framework agreement of the joint investment fund was already signed. The agreement was signed by TWF Director General Mehmet Bostan and Russian Direct Investment Fund (RDIF) CEO Kirill Dmitriev.

The Russian president also stated that even though the visa regime will continue for a while, Russia will liberate the visa requirement for Turkish citizens. Yet, he stated that the liberization will depend on the cooperation between the two countries' security forces.

However, recently, at the end of April, Russian Deputy Foreign Minister Alexei Meshkov announced that Russia is preparing to ease visa procedures for Turkish citizens.

The deputy foreign minister reportedly told Sputnik that Russia is ready to facilitate easier visa formalities for businesspeople working with Russia, while he noted that it is also important to work in this regard for Turkish truck drivers.