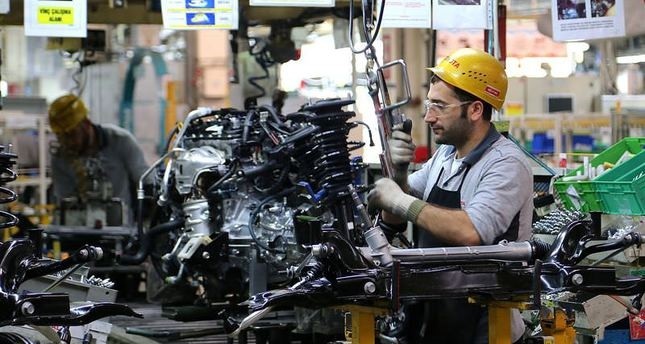 by Daily Sabah May 05, 2017 12:00 am
Combatting the unemployment rate at a record 13 percent, Labor and Social Security Minister Mehmet Müezzinoğlu has said that since the beginning of the year, thanks to the employment mobilization, more than 1 million additional jobs have been created, and over 750,000 people in private businesses have been insured under Turkey's Social Security Institution.

Müezzinoğlu, who defined the 13 percent unemployment rate as the peak of the year in January, covering the period between January 2016 and February 2017 according to TurkStat data, reiterated that the single-household target was kept at the end of the year.

Speaking to state-run TRT Haber, the minister said, "More than 1 million new jobs were created between Jan. 1 and May 3, including 767,322 people in private businesses insured under the 4/A [Social Security Institution of Turkey] policy, excluding public and publicly hired employees."

With support provided under the scope of the employment mobilization initiated in January, the cost for employers who hire employees on minimum wage decreased by TL 773 ($200) to reach TL 1,404. While the cost of the package is estimated at TL 12.3 billion, TL 11 billion of the said amount is covered by the Unemployment Fund.

Target set as 2 millionThe employment mobilization was initiated at the beginning of January in order to eliminate the negative effects of slowdown in employment. Later, President Recep Tayyip Erdoğan also called for the mobilization on Feb. 7.

With the scheme, a total of 1.5 million people were expected to be employed, while 500,000 people would receive professional training.
RELATED TOPICS