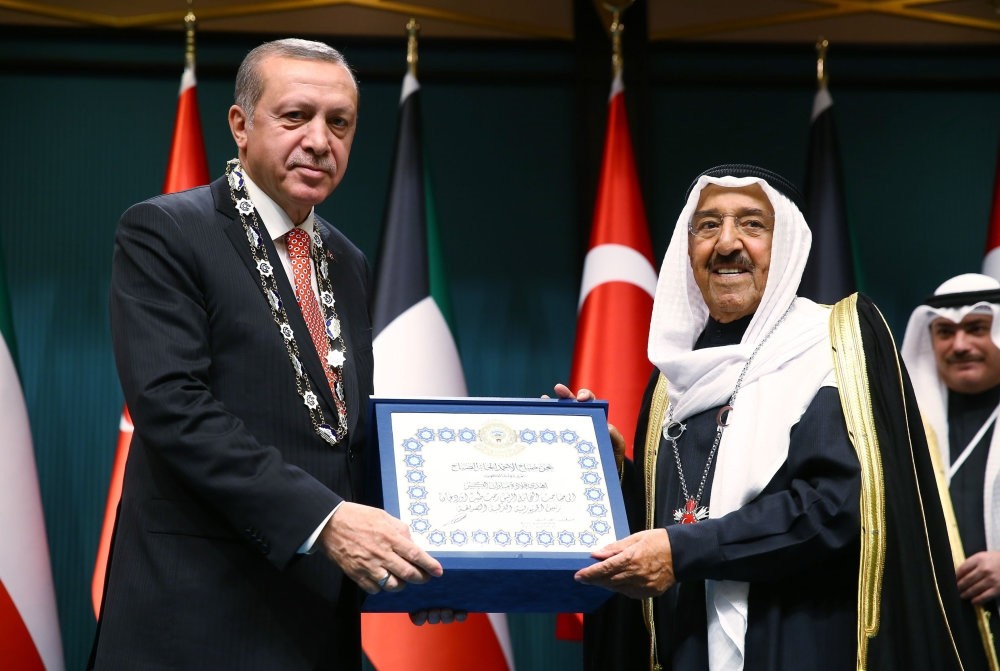 President Erdou011fan and Sheikh Sabah al-Ahmad al-Jaber al-Sabah exchanged awards in a ceremony held in the Presidential Complex in Ankara in March.
by Daily Sabah May 09, 2017 12:00 am

President Erdoğan is visiting Kuwait today as the two countries seek ways to strengthen economic ties. Erdoğan will hold official talks with Kuwaiti Emir al-Sabah to discuss economic issues, along with regional ones

President Recep Tayyip Erdoğan is set to pay an official visit to Kuwait today to strengthen trade ties with the country. Kuwait, a oil-rich state of the Gulf region and the fifth largest oil producer of the Organization of Petroleum Exporting Countries (OPEC), has about 10 percent of the world's known crude oil reserves.

The fact that Erdoğan will visit Kuwait two years after his last visit has turned the public's attention toward the country. Erdoğan will attend the groundbreaking ceremony of the Kuwait International Airport New Main Passenger Terminal, which has been undertaken by Limak İnşaat, marking it as the largest tender won by a Turkish company abroad. President Erdoğan will hold bilateral talks with the Emir of Kuwait, Sheikh Sabah Al-Ahmed Al-Jaber Al-Sabah, as well as inter-delegatory meetings during his visit.

The Presidential Press Center reported that the talks will focus on regional and international issues as well as bilateral relations with Kuwait, and that President Erdoğan's visit will contribute to the deepening cooperation with Kuwait, with which Turkey already has excellent relations.

With a total area of 17,818 square kilometers (6,880 square miles), Kuwait gained independence from Britain in 1961 and now has a constitutional monarchy system ruled by the al-Sabah family.

Having increased its oil production following its independence, the country was occupied by Iraq in 1990. The occupation ended after "Operation Desert Storm" conducted by the coalition forces led by the United States in 1991.

Kuwait's proven oil reserves, which account for about 10 percent of the world's known crude oil reserves, consist of 101.5 billion barrels, while its natural gas reserves measure about 1.8 trillion cubic meters. Oil and gas revenues account for 70 percent of the country's Gross Domestic Product (GDP), with an oil production of 2.7 million barrels a day. Aiming to gradually increase this amount to 4.75 million by 2040, Kuwait is expected to become a business, transportation and cultural center in the region by 2035.

Seven companies with Turkish capital operate in Kuwait, while the total cost of the 30 projects undertaken by Turkish firms in Kuwait to date amount to about $6.5 billion.

The country has identified Turkey as one of its priority investment targets alongside seven countries, including China, Egypt, Vietnam and Morocco, since 2005. While Kuwait closely follows many privatization and investment projects in Turkey, there is a significant increase in foreign direct investment inflows originating from Kuwait.

Kuwaiti companies investing in Turkey generally operate in the fields of finance, real estate, trade and industry. They have also shown an increasing interest in privatization and company purchases in Turkey in recent years.

THY, Pegasus and Atlasjet schedule 37 flights a week from Istanbul, Antalya, Bursa, İzmir and Trabzon to Kuwait. Besides, about 4,500 Turkish citizens reside in Kuwait, and the number of Kuwaiti tourists who visited Turkey last year reached 179,000.

Emir of Kuwait's visit to Turkey in March

Kuwaiti Emir Sheikh Sabah al-Ahmad al-Jaber al-Sabah paid a two-day visit to Turkey in March. President Erdoğan and the Kuwaiti emir exchanged awards late in a ceremony held in the Presidential Complex in Ankara as Erdoğan received the Order of the Mubarak the Great, which is the highest award given by Kuwait. In return, Erdoğan presented the Order of the State of the Republic of Turkey, the highest order in the country, to the Kuwaiti emir.