President Erdoğan meets with 40 top US investors in Washington 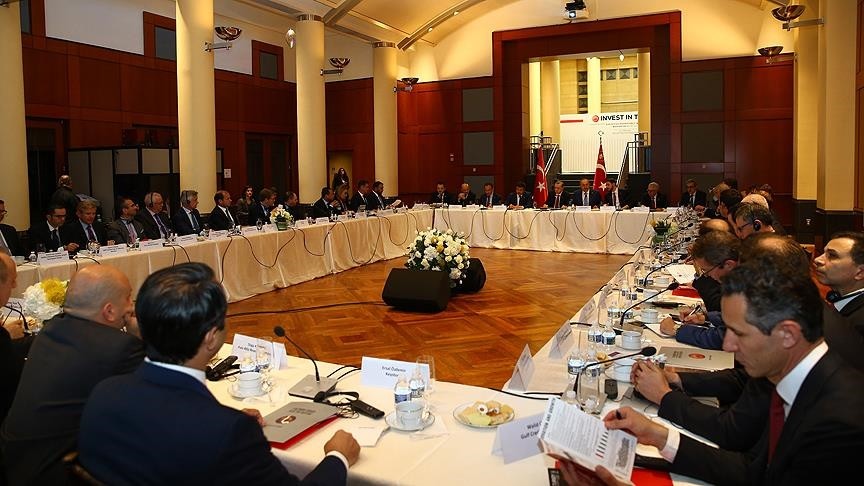 Besides discussing regional and global issues with his American counterpart Donald Trump, during a two-day visit to the U.S., President Recep Tayyip Erdoğan met 40 prominent U.S. investors and invited them to invest in Turkey, as he highlighted the opportunities it offers through the Prime Ministry Investment Support and Promotion Agency of Turkey (ISPAT).

According to a statement released by ISPAT, President Erdoğan met important fund managers and company representatives operating in various sectors, such as defense, aviation, chemistry, health, information and manufacturing.

ISPAT in its statement said, President Erdoğan invited representatives of different mega-corporations and urged them to increase investments in Turkey and shared the recent developments regarding investment environment and the economic agenda in the country.

President of ISPAT, Arda Ermut said the meeting was of great importance with regards to communicating the government's effective and decisive policy, regarding the Turkish economy with U.S. investors, first hand.

"With this meeting, which brought together our President with the presidents and CEOs of leading U.S. companies and top managers of international fund firms, we showed Turkey's support to international investors at the highest level. We have observed deep interest in our country and Mr. President in this sense," Ermut said, stressing that the close support that the president himself gives to investors plays a great role in this regard.

He said, the fact that President Erdoğan assured investors that he will personally provide support, through relevant ministries and government institutions, in matters the ISPAT has had problems finding solutions to. His instructions to our agency on bringing these matters directly to him will also influence investors.

Recalling that earlier in March and September last year, President Erdoğan had met international investors at two meetings in the U.S., Ermut said fruitful meetings were also held at that time, with serious interest and participation from companies. Issues such as the continuity of economic reforms, support from U.S. companies in trade agreements between Turkey and the U.S., investment agendas of technology companies and agendas of international investment companies to increase their investments in Turkey were discussed at the meetings.

Ermut also noted that the new picture emerging after the referendum shows that international investors trust Turkey's investment environment, political stability, and vision for the future.

Turkey management base of the globe

ISPAT had previously prepared a success plan in four areas:

Human resource: Turkey is not an ordinary developing country, but a leader in its region with a qualified labor force. It is undergoing a transformation to establish an economy with the help of its educated young people.

Market potential: Turkey is the gateway to unsaturated markets and is located at the junction between the old world in the Atlantic region and the new world in the Pacific region. It has a presence in various sectors. It has a middle class and small and medium size enterprise (SMEs that are the driving force of the economy). It has a strong banking sector and unique market potential.

Reformist political will: President Erdoğan personally explained reforms that will pave the way for global investors when he visited the U.S. The public sector can carry out mega projects in cooperation with the private sector. It can make rapid decisions to revive the investment environment.

The U.S. is ranked second among countries that have the largest amount of foreign direct investment (FDI) in Turkey, and the trade volume between the two countries was almost $17.5 billion in 2016.

In mid-September, Philip Kosnett, the Chief Undersecretary at the U.S. Embassy in Ankara, confirmed that more than 60 U.S.-based companies run regional operations from Turkey and that more than 1,400 U.S. companies in Turkey pay more than TL 7 billion ($1.97 billion) in taxes annually.

According to data compiled by the Istanbul Chamber of Industry (ISO), American companies are listed among the top 500 industrial corporations in Turkey. The table below shows the top six companies listed by their net sales revenue from production.