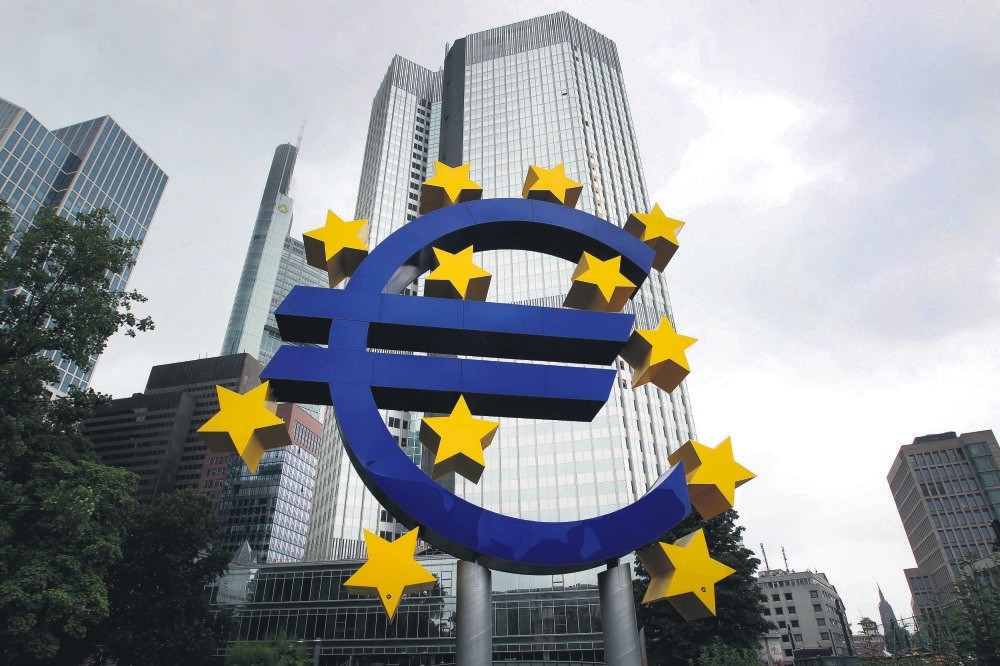 A huge logo of the Euro currency in front of the former headquarters of the European Central Bank in Frankfurt, Germany.
by Jun 03, 2017 12:00 am

A growing split among eurozone policymakers has made investors question how long the current level of stimulus can last, leading to a reduction in demand for long-dated government bonds in the bloc.

Yields, which move inversely to prices, have been rising faster on Germany's 30-year bonds than 10-year bonds to the extent that the gap between the two benchmarks hit its widest in 18 months on Friday.

Investors can rack up greater losses on longer-dated bonds because they tend to have a higher duration and are more volatile when the outlook for monetary policy changes.

Duration is a measure in bond markets to calculate the number of years of coupon payments needed to make back an initial investment.

While European Central Bank chief Mario Draghi insisted this week that extraordinary stimulus measures are still necessary, other policymakers - led by Bundesbank President Jens Weidmann - have opposed this view ahead of next week's ECB meeting.

Analysts say this split is behind the reduced demand for long-dated bonds, but also explains the potential for issuance in that part of the curve as borrowers seek to lock in low costs.

"While there are many uncertainties about what the ECB will do, there is a growing feeling that we are now past the peak of quantitative easing - and in that situation, investors are most concerned about potential losses on long-dated bonds," said DZ Bank strategist Daniel Lenz.

Commerzbank analysts say the eurozone government bond curves - the gap between yields on short and long-dated bonds - can steepen further with speculation about more supply and less quantitative easing on the rise.

The spread between Germany's 10- and 30-year bond yields hit 86 basis points early on Friday, its highest since January 2016, before narrowing a touch.

"The ultra-long widening stands out compared to the much more contained moves across the curve, suggesting that speculation regarding a new 30-year BTP benchmark are at play with the (Italian debt agency) to front-run potential election fears," the Commerzbank analysts said in a note.

Brent oil tumbled below $50 on Friday, heading for a second straight week of losses, on worries that U.S. President Donald Trump's decision to abandon a climate pact could spark more crude drilling in the United States, worsening a global glut.

"The oil prices fall is enough to give a bit of a downward pressure to eurozone government bond yields, but it is not a convincing move so far," said ING strategist Antoine Bouvet.

Germany's 10-year government bond yield, the benchmark for the region, was 1 bps lower at 0.29 percent.

Since the end of January, a key gauge of long-term eurozone inflation, the five-year, five-year forward rate, has shed over 20 basis points to 1.57 percent.