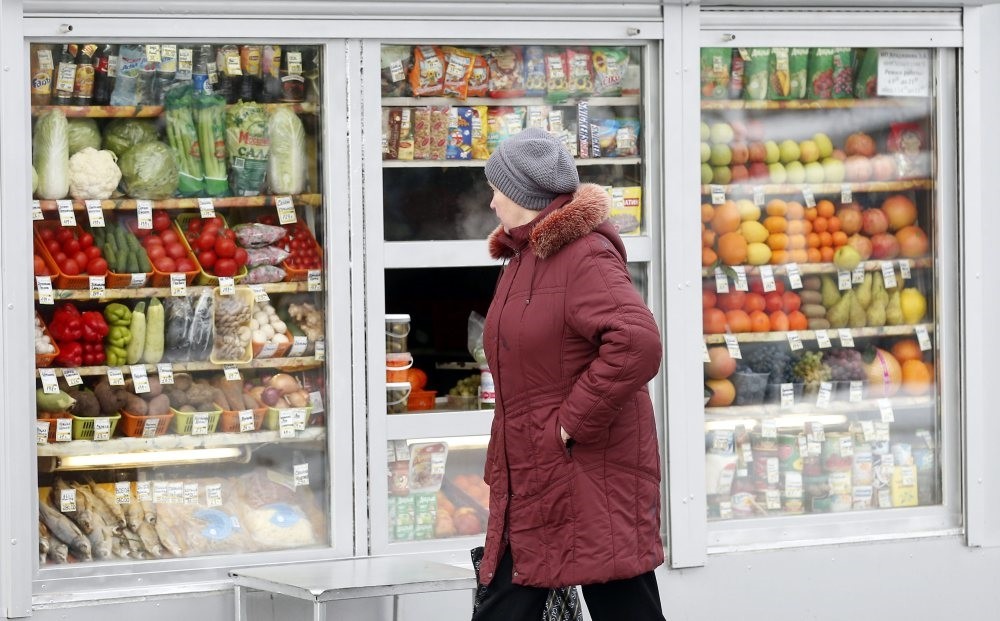 A Russian woman peers through the window to view fruits and vegetables at a street side market in Moscow.
by Daily Sabah with AA Jun 03, 2017 12:00 am

The Russian government continues to partially remove sanctions on Turkey. A new decree lifted the ban on some agricultural products and some Turkish firms. Tomato imports might be allowed for some special uses, as Russia supports its own production

Russia on Friday further relaxed trade sanctions placed on Turkey in the aftermath of the downing of a Russian fighter jet in 2015. In a statement, the government said Russian Prime Minister Dmitry Medvedev had signed a decree lifting the ban on some agricultural produce and Turkish companies involved in construction, engineering and tourism.

The development is the latest in the lifting of sanctions imposed after Turkey shot down a Russian warplane that had violated Turkish airspace from Syria in November 2015.

Friday's resolution removed frozen chicken and other poultry by-products as well as cucumbers, gherkins and fresh fruits from the list of blocked products, the government said. It also lifted the ban on Turkish construction, design, engineering and tourism-related companies. The decree did not mention restrictions on tomato imports from Turkey.

During a May 3 visit to Russia, Turkish President Recep Tayyip Erdoğan and President Vladimir Putin agreed to remove sanctions with the exception of tomatoes.

During the 25th-anniversary summit for the Organization of Black Sea Economic Cooperation (BSEC) in Istanbul on May 22, Turkey and Russia signed a joint declaration to life trade restrictions between the two countries with Turkish Prime Minister Binali Yıldırım, his Russian counterpart Medvedev, Turkey's deputy Prime Minister Mehmet Şimşek and his Russian counterpart Arkady Dvorkovich who attended the ceremony.

After November 2015, Moscow took several measures against Ankara, including the banning of imported Turkish agricultural products and the ending of visa-free travel for Turks. Relations were frozen for months between the countries but relaxed in the summer of 2016 when Putin and Erdoğan began to bury the hatchet.

"We will solve these issues within the framework of consultations with our Turkish counterparts on a reciprocal basis," Dvorkovich was quoted as saying by TASS. He said consultations on the seasonal admission of Turkish tomatoes to the Russian market would continue during the summer. Dvorkovich, answering journalists' questions at the St. Petersburg International Economic Forum (SPIEF), said that tomatoes might be imported from Turkey in low volumes for use in making products such as sauces and fruit juices. Noting that Turkish tomatoes with affordable prices can be used for processing, Dvorkovich said, "However, importing tomatoes in high volumes is not on our agenda."

"I think they will be going on through the summer. We can reach an agreement, but I would not expect any very high volumes of supplies; they will be rather limited," he told reporters on the sidelines of the St. Petersburg International Economic Forum.

The Russian government put into effect the decision to remove all restrictions on Turkish food products, excluding tomatoes today.

Russia's Agriculture Minister Aleksandr Tkachev, who took the toughest stance regarding the sanctions against Turkey and favored the continuation of the ban, said that the restrictions on Turkish tomatoes would last for at least three years. "The next three years will be decisive for the development of the tomato production sector in Russia. We have already reduced imports by almost twice, and we produce 800,000 tons of tomatoes in our country," Tkachev told Sputnik in an interview. "We have to increase our production by about 500,000 tons more. This requires three to five years depending on the market. For this reason, the return of Turkish tomatoes to our market is not in question in the near future."