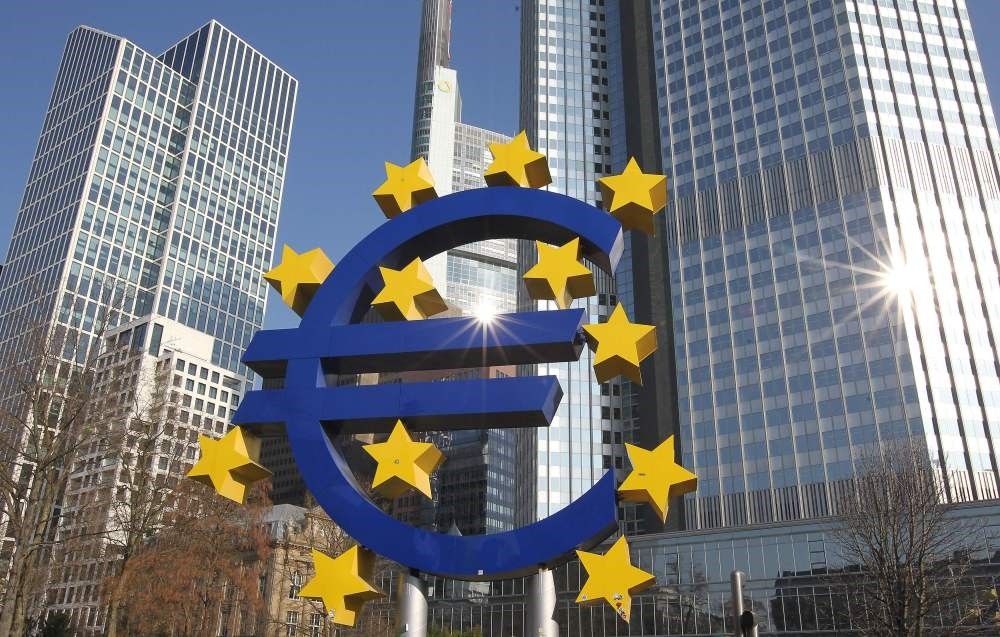 The European Central Bank lowered its inflation outlook to reflect a drop in oil prices but raised its forecasts for 2017-2019 economic growth, noting that the single-currency economy is surfing on momentum that increases the stakes of a stronger-than-expected economic upbeat

The European Central Bank took a small step yesterday toward phasing out its extraordinary support measures for the eurozone economy as further evidence emerged of the stronger and broader recovery in the single currency bloc.

The bank's president Mario Draghi was careful however not to give financial markets a clear signal as to when its stimulus efforts will start to be withdrawn given ongoing worries over too-low inflation.

That reluctance pushed the euro currency down to week-lows against the dollar just above $1.12.

The bank kept ECB's interest rates and its stimulus program unchanged at a meeting Thursday of its 25-member governing council. The council made a small concession to the improving economic backdrop by dropping wording that it could lower interest rates further.

That's a sign of greater confidence in the economy, which is growing at a two-year high, confidence that ECB President Mario Draghi echoed in subsequent comments. Draghi said risks to growth are now "broadly balanced" - a tweak from last time out when risks were "tilted to the downside."

Draghi said recent data suggest "a stronger momentum in the euro area economy, which is projected to expand at a somewhat faster pace than previously expected."

The evidence is piling up that the growth in the eurozone has kicked into a higher gear and the region is recovering from the Great Recession and the ensuing crisis over high debt that pushed some eurozone countries, notably Greece, to the brink of bankruptcy. Earlier Thursday, the Eurostat statistics agency revised figures for first-quarter growth up to 0.6 percent from 0.5 percent.

The bank's adjusted statement represents a cautious step toward an announcement, expected later this year, that the bank will taper and end its extraordinary monetary stimulus as growth and inflation improve. Analysts think the bank might announce that in September.

The bank left its bond purchase stimulus unchanged at 60 billion euros ($67 billion) per month through at least the end of the year and longer if necessary. The measure pumps newly printed money into the economy in an effort to raise inflation toward the bank's goal of just under 2 percent cons

idered best for the economy.

Draghi said inflation indicators "have yet to show convincing signs of a pickup."

Though inflation in the eurozone is higher than it was for much of the past two years, that's largely because of a pick-up in oil prices. In the year to May it was 1.4 percent and the ECB doesn't expect much change over the coming two years. The bank lowered its forecasts for eurozone inflation this year to 1.5 percent from 1.7 percent, and for next year to 1.3 percent from 1.6 percent.

Though making some modest linguistic changes, the central bank's announcement kept important wording that its bond-buying stimulus program could be stepped up if the economic outlook worsens. While few expect that to happen, the words underline that the bank is not yet willing to call time on the stimulus program.

Analysts think the purchases will be tapered next year, but the bank has moved gingerly in indicating when it might be ready to announce a schedule for reducing and then ending them. The purchases with newly printed money are aimed at increasing inflation from its current annual 1.4 percent toward the bank's goal of just below 2 percent.

Ending the bond purchases and raising interest rates could have wide-ranging effects, such as a stronger euro and higher interest costs for heavily indebted governments.

Yesterday, the bank has kept its short-term benchmark rate that steers short-term rates at a record low of zero. It is also charging banks negative interest of 0.4 percent on excess cash parked at the ECB. That is in effect a tax aimed at pushing them to lend the money instead of hoard it.

The ECB held its policy meeting in Tallinn, Estonia, one of the occasional meetings held away from the bank's Frankfurt headquarters.