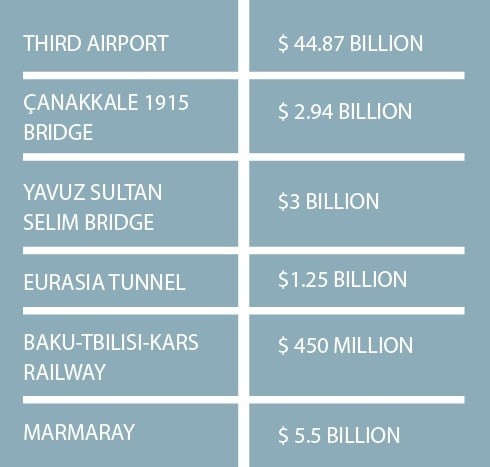 This table shows the largest transportation investments carried out in Turkey in recent years.
by Elif Binici Erşen Jun 14, 2017 12:00 am

Over the last decade, Turkey has been a generous investor in large scale infrastructure projects which will shift the center of gravity of global transport to the country and strengthen its position as a transport hub

Turkey has been heavily investing in infrastructure projects over the last decade including bridges, divided highways, freeways, tunnels, railways, airports and many other undertakings, and it will continue to do so, according to Transport, Maritime Affairs and Communication Minister Ahmet Arslan. Arslan, who spoke in an exclusive interview with Daily Sabah at the 10th International Transport Forum in Leipzig, emphasized the aim to shift global transport corridors to the country.

Situated at the crossroads of major airways, marine routes, railways and roads that connect Europe, Asia and Africa, Turkey has completed transport and communications infrastructure projects with a total value of TL 304.2 billion ($86.3 billion) during the period between 2003 to 2016, according to a report from the Ministry of Transport, Maritime Affairs and Communication. 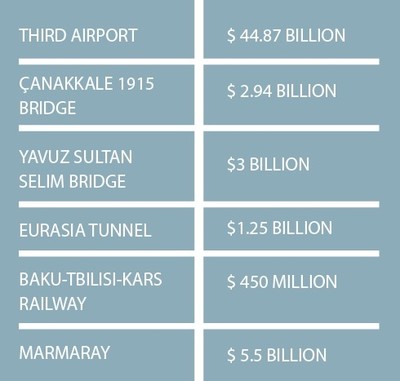 The total amount of investments completed in accordance with the public-private partnership (PPP) model was registered at almost TL 80 billion for the same period and half of this amount is still invested in ongoing projects.

In the scope of efforts to improve transportation infrastructure in the building of roads, railways and airports, one might delve into the benefits these investments yield both for Turkish citizens and neighboring countries, and Minister Arslan is the person to guide us towards understanding Turkey's objectives in realizing such mega infrastructure projects such as the Marmaray, the Eurasia Tunnel, the Yavuz Sultan Selim Bridge, the Istanbul New Airport, the Ankara-Istanbul High-speed Railway, the Baku-Tiflis-Kars Railway, the Çanakkale 1915 Bridge.

When asked to elaborate on why Turkey has invested so heavily in transportation infrastructure projects, Minister Arslan emphasized three points. First, he pointed out that the government aims to increase the social welfare and convenience of Turkish citizens with modern projects. Secondly, he stated that these projects aim to facilitate the growth of the country's trade and industry.

"We as the government see transportation infrastructure projects as essential to the growth of Turkish trade and industrial development. As we continue to carry out such projects, we know that obstacles that hinder the development of trade and the costs rendered will be decreased while we develop highly economical infrastructure, which, in the end, encourages production," Arslan said, underscoring the fact that President Recep Tayyip Erdoğan, Prime Minister Binali Yıldırım and the entire Justice and Development Party (AK Party) government considers transportation infrastructure development projects as indispensable for the growth of Turkey's manufacturing industry, exports and the local economy. 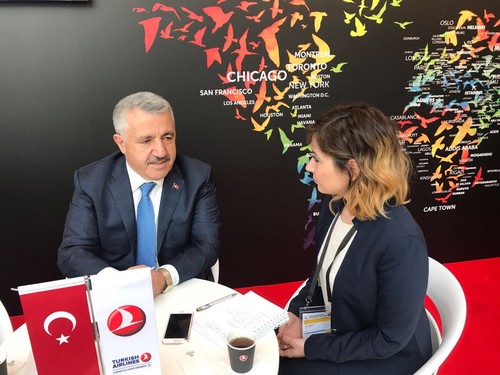 As a matter of fact, taking a closer look at the advantages yielded by dual carriageways proves the minister's point regarding the contribution of these projects to the economy. A ministerial budget report for 2017 demonstrates that divided highways, which ran only 6,000 kilometers 13 years ago, has reached almost 25,000 kilometers as of 2016. The report also states that the goal is to increase this to 30,000 kilometers by 2019.

This type of roadway not only provides a cleaner and more sustainable environment that curbs CO2 emission by 3.26 million tons in Turkey, but also ensures workforce efficiency, fuel savings and overall savings for the economy. The report reveals that divided highways in Turkey, by making road transport safer and more efficient, provided a-278-million-hour workforce efficiency, corresponding to an additional TL 10.3 billion to the Turkish economy.

As for fuel saving, it provided 1.68 million liters of fuel, equal to an additional TL 6.18 billion for the local economy. These figures gain the Turkish economy a savings of TL 16.5 billion per year. This significant figure of efficiency in the end triggers a stimulus to continue production and trade, which necessitates a well-developed transport system of all kinds.

Taking advantage of the considerable impact that divided highways have, Turkey also sustains its investments in highways. The Northern Marmara Highway that will connect Istanbul in an uninterrupted roadway to Izmir will be completed next year, Minister Arslan noted. According to the minister, the government is also working on projects that will link Izmir to eastern Turkey via highways, as well as focusing on the north-south axis of the country.

"In accordance with our growth potential and objectives, we are building a network of highways so that we can generate more added value for the international transportation sector," the minister said, stating that these projects are essential to unleashing Turkey's growth.

Minister Arslan also pointed to the need for becoming an indispensable part of global corridors in each and every kind of transportation. With regards to the third and most ambitious reason for Turkey's intense efforts to accomplish infrastructure projects on a large scale, he drew attention to the unique geographical location of the country.

"In completing Turkey's transportation corridors, we want to link the transport corridors in the world as a country that serves as a bridge between three continents [Asia, Europe and Africa], just as we want to ensure the successful fulfillment of the two aforementioned objectives," the minister confirmed. 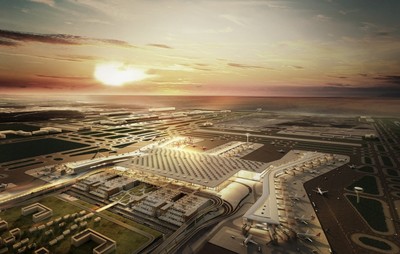 He underscored the fact that the need for Turkey to build mega infrastructure projects emerged accordingly, pointing to the fact that the center of gravity of global transportation, particularly by air, has shifted towards Eurasia and the Far East. Arslan remarked that once Turkey seals its link to the global transportation corridors, through which a significant portion of global trade is conducted, it will increase its share in global trade and benefit other countries engaging in trade transactions along these corridors as well.

"Every country needs the other. Not only do all the transport projects completed by any country serve themselves, but they also must serve general transportation corridors," the transport minister emphasized, while adding that he iteratively brings up this point across all the meetings he holds with his counterparts.

Therefore, he asserted, Turkey seeks cooperation with other countries to carry out its infrastructure projects in finding ways to link transportation corridors.

"We engage in a quest for partnerships with other countries to make our infrastructure projects; be it railways, marine routes, roads or air routes, complementary with global transportation corridors. Our projects, in that sense, not only serve Turkey and the Turkish economy but also serve significant transport points," he noted.

Minister Arslan recalled that Turkey has been actively working to revive the Silk Road as part of the One Belt, One Road (OBOR) initiative, launched by Chinese President Xi Jinping, which covers an area inhabited by 4.4 billion people corresponding to 40 percent of the global gross domestic product (GDP). He stated that Turkey's projects over the last 14 years aimed to consolidate the Silk Road over airway, railway, roadway and maritime routes, saying that in that regard, the country is in constant collaborations with its neighbors.

The minister cited the case of the Baku-Tiflis-Kars Railway Project, which will be operational in early September, and will link Turkey to Azerbaijan, Kazakhstan and northern China.

Minister Arslan underscored the significance of the Edirne-Kars railway project while he spoke about international corridors.

"With the Marmaray, we constructed an uninterrupted transportation corridor under the sea bed and now we are going to build another link. We will upgrade the line from Edirne and Kapıkule, Turkey's customs border with Bulgaria, to Kars to the high-speed-rail or speed-rail standard for a faster, more modern and more efficient transportation," he added, saying that the Ministry will launch the tender process for Edirne-Halkalı line this year.

The Ministry is carrying out a number of projects to complete the Edirne-Kars line and its link to the north-south axis over the Black Sea and the Mediterranean, according to Minister Arslan. One of those projects is being planned in collaboration with China and is in the advanced stages.

"What matters is that our perseverance in expanding these railways is stable. We will keep working on more railway projects in the future, no matter our partnerships or which part we play in the construction of this vast railway network," the minister noted.

To that end, he stressed that another multinational railway project, the Kars-Iğdır-Dilucu-Nakhichivan route is in the planning stage and is projected to complete the Baku-Tiflis-Kars line.

At this point, the minister stated that it would be misleading to mention only one corridor when speaking about international transportation corridors. In this regard, he referred to the rail line to Nakhichevan, which is another chain in the global transportation corridor that extends to China. Connecting Turkey to Iran, Pakistan, India and finally to southern China, these projects, according to the minister, are complementary to the middle corridor of the OBOR initiative and aim to serve international transport corridors through which goods are carried across countries.

Considering Minister Arslan's projections and Turkey's intense efforts, it seems that we will hear the country's name in many more multi-national projects as an important gateway to the international transport corridors to increase the share of the global trade pie both for itself and its partners.