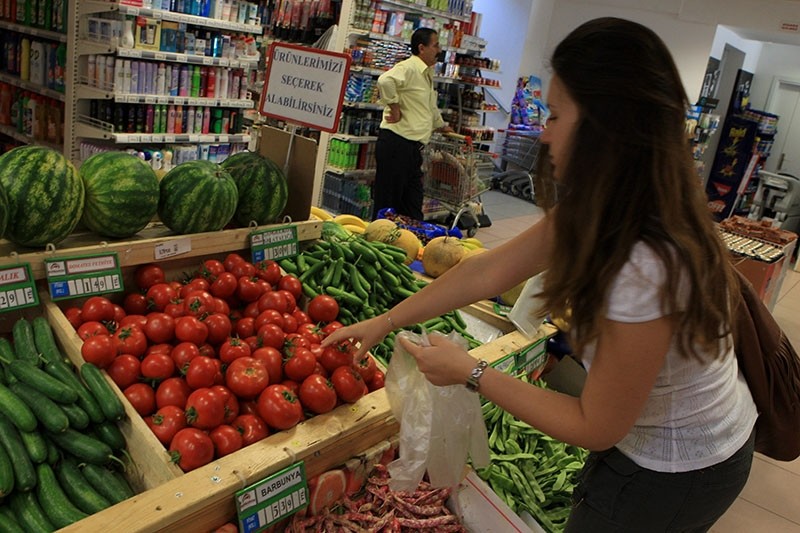 According to Gruzdev, the interests of Russian producers will be taken into account amid efforts to solve the issue.

"Tomatoes were initially designated by [Russian President Vladimir Putin and his Turkish counterpart Recep Tayyip Erdoğan] as a separate topic. The economic conditions and interests of Russian producers must be taken into account, so this issue will be decided on later, after the necessary consultations are made," Gruzdev said.

The declaration is viewed as an important step toward the normalization of economic relations and increasing trade volume between the two countries.

On Nov. 24, 2015, the shooting down of a Russian fighter jet led to an unprecedented crisis in Turkish-Russian ties and prompted the latter to impose a rift of sanctions on Turkey.

These included an effective ban on Russian holiday packages to Turkey, ruining the 2016 tourism season in the country's southern coastal region.

The ban has been lifted and the number of Russian tourists visiting Turkey is making a quick recovery after having dwindled as a result of the sanctions.

During the 25th Anniversary Summit for the Organization of Black Sea Economic Cooperation (BSEC) in Istanbul on May 22, Turkey and Russia signed a joint declaration to lift trade restrictions between the two countries with Turkish Prime Minister Binali Yıldırım, his Russian counterpart Medvedev, Turkey's deputy Prime Minister Mehmet Şimşek and his Russian counterpart Arkady Dvorkovich, who attended the ceremony.

A previous meeting held on the issue between Dvorkovich and officials from Russia's largest domestic tomato production companies in Moscow was referred to by Russian newspaper Izvestia in the publication titled, "A door opens for Turkish tomatoes in Russia." According to Izvestia, the summit focused on "the conditions under which and how the ban on the Turkish tomato should be removed." It was also reported that Dvorkovich has made preparations in Moscow to solve the issue of sanctions with Turkey and will soon submit a report to Russian Prime Minister Dmitry Medvedev.

Izvestia announced that the meeting held within the scope of the normalization of ties between Moscow and Ankara addressed issues including how and under what conditions the general Turkish tomato ban could be mitigated. Izvestia stated that one of the options on the Russian side is to allow the import of Turkish tomatoes only during the winter season, when domestic production cannot meet demand.

Following his visit to Sochi on May 3, President Erdoğan said the two leaders agreed on everything except tomatoes. He also said that a new formula for tomato sales to Russia could be introduced soon, according to the number of seasonal tomato exports.

Turkey will ask Russia to open its market for tomato exports in the winter months and will also specify that the exports could be closed in the greenhouse tomato period in Russia. Pointing out that greenhouses cannot produce tomatoes 12 months a year and that climate and sunshine are important as well as heating conditions, officials said: "For example, we will ask them to allow exports between December and March and close exports during other months. We will sit down and discuss the details and this will be our offer."

Following the ban by the Russian government, Turkey's exports of tomatoes increased by 500 percent to Belarus, 200 percent to Poland, 200 percent to Azerbaijan and 130 percent to Nakhichevan. In addition, producers and exporters, regarding an increase in the tomato exports to countries neighboring Russia, said they are buying tomatoes from them and selling the product to Russia.

Indicating that the price of selling tomatoes to Russia before the crisis was around TL 4-5 ($1.14-1.42), Turkey's Greenhouse Investors' and Manufacturers' Association (SERA BİR) Chairman Müslüm Yılmaz previously noted, "After the crisis, the tomato price in Russia was TL 13 ($4). Russian citizens consume tomatoes at a price that is three times higher that amount."

In the January-April period of 2016, Turkey exported 227,619 tons of tomatoes valued at $120 million. In the same period this year, 267,482 million tons were exported and the value of these exports was $161 million. Officials stated that Turkey's tomato exports increased by 18 percent compared to the previous year, saying there was a value-based increase of 34 percent. They also said that tomatoes are entering the Russian market.

According to the Turkish Exporters' Assembly data from May, Turkey's fresh fruit and vegetable exports to Russia increased by 503.7 percent in May and reached $2.12 billion.