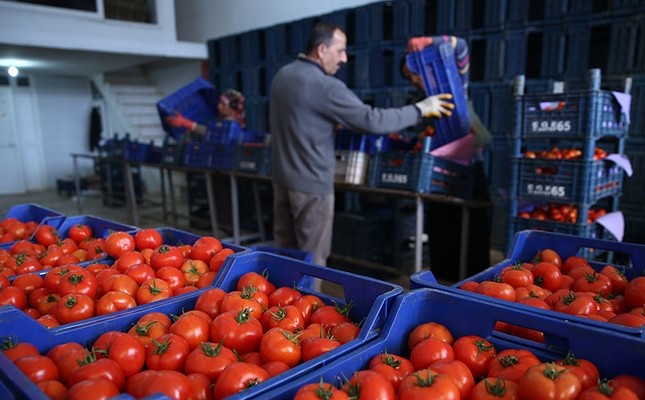 Russia has decided to finally give the green light to lift the sanctions it had imosed on Turkish tomatoes. It will import tomatoes from Turkey when Russian producers run low

Russia has decided to buy tomatoes from Turkey at certain times and three companies that meet the requirements will initially export them to the country. The green light was finally given regarding the embargo that Russia had applied on Turkish tomatoes, according to Turkish-language daily Milliyet's report. Russia decided to import tomatoes from Turkey at certain periods which the product is not grown by its own producers and it will additionally import other products such as tomato paste from Turkey.

According to the decision taken after the contacts of Russian officials in Turkey, three companies that fulfill the technical requirements will initially export Turkish tomatoes to the country.

Turkey, which produces 70 percent of tomato exports to Russia, faced a Russian embargo after the jet downing crisis between the two countries. Russia, which launched an economic embargo on Turkey as of January 1, 2016. The imposed import sanctions on many Turkish products such as tomato, orange, apple, apricot, broccoli, mandarin, pear, chicken and turkey, were later lifted after normalization talks began, with the exception of tomatoes. Turkey, therefore, intensified efforts to solve the crisis surrounding the crucial exports of tomatoes.

The Turkish delegation that engaged in talks with the Russian delegation that came to Turkey, proposed to pave the way for exporting in the seasons when Russia cannot produce tomatoes.

It was reported that Russians also leaned toward this proposal. According to the decision made after technical talks with Russian officials, three Turkish companies that meet the technical requirements will be the first to engage in exports with Russia. These three companies will be selected from those which have exported to Russia before.

The export permit covers the entire year except for a few months when Russia can plant tomatoes. The permit is expected to take effect within a few months. Samples will be taken from Turkish tomatoes with the mechanism to be set up and then, tomatoes that meet the required conditions will be exported without any bottleneck in customs.

Thus, problems associated with pesticides are expected to be avoided. With the said mechanism, there will also be no customs duties arising from the inspection with regards to the exports of tomatoes.

With the new system, the Russian farmers who started to produce tomatoes in the greenhouses after the crisis, will not be victimized either. Russia's tomato needs will be primarily met from the domestic producers. Especially, the greenhouses in the southern part of the country are said to be working efficiently.

Russia estimates that the tomato prices in the market will also drop as a result of renewed visa exports of tomatoes from Turkey. In 2014, Turkey exported $508 million in tomatoes and cucumbers to Russia, while prior to the embargo, 43 percent of the tomatoes consumed in Russia came from Turkey.

Following the ban by the Russian government, Turkey's exports of tomatoes increased by 500 percent to Belarus, 200 percent to Poland, 200 percent to Azerbaijan and 130 percent to Nakhichevan. In addition, producers and exporters, regarding an increase in the tomato exports to countries neighboring Russia, said they are buying tomatoes from them and selling the product to Russia.

Indicating that the price of selling tomatoes to Russia before the crisis was around TL 4-5 ($1.14-1.42), Turkey's Greenhouse Investors' and Manufacturers' Association (SERA BİR) Chairman Müslüm Yılmaz previously noted, "After the crisis, the tomato price in Russia was TL 13 ($4). Russian citizens consume tomatoes at a price that is three times higher that amount."

In the January-April period of 2016, Turkey exported 227,619 tons of tomatoes valued at $120 million. In the same period this year, 267,482 million tons were exported and the value of these exports was $161 million. Officials stated that Turkey's tomato exports increased by 18 percent compared to the previous year, saying there was a value-based increase of 34 percent. They also said that tomatoes are entering the Russian market.

According to the Turkish Exporters' Assembly data from May, Turkey's fresh fruit and vegetable exports to Russia increased by 503.7 percent in May and reached $2.12 billion.