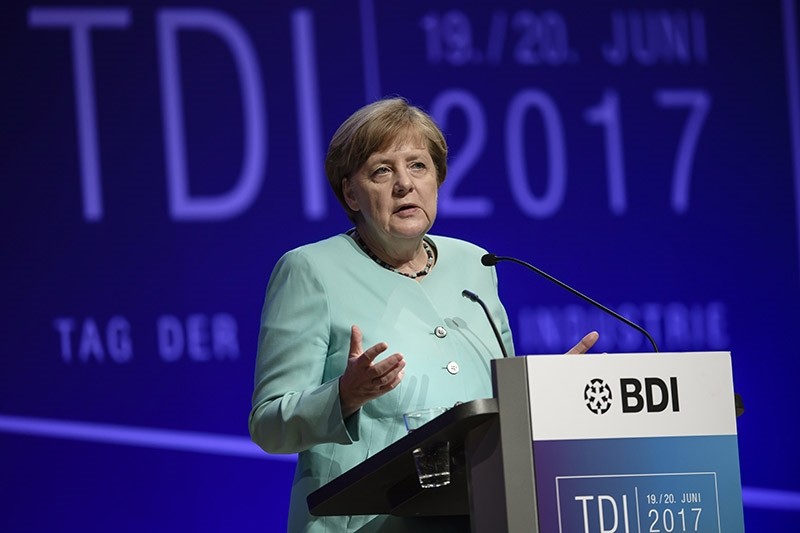 German Chancellor Angela Merkel speaks during the Day of the German Industry in Berlin, Germany, 20 June 2017. (EPA Photo)
by Compiled from Wire Services Jun 20, 2017 12:00 am

German Chancellor Angela Merkel said Tuesday that she hoped the Group of 20 summit in Hamburg next month would result in renewed commitment to free trade in light of growing protectionism and isolationism in parts of the world.

"Open markets and free, fair sustainable and inclusive trade is a key focus of our G20 presidency," said Merkel, who will host the G20 in Hamburg next month.

"Thought patterns that we thought had been overcome are suddenly resurfacing," Merkel said at the Day of German Industry in Berlin, an annual gathering of business leaders.

Without naming the United States explicitly, Merkel said that some countries were prioritizing short-term gains for business over long-term economic growth.

"It may be true that isolationism and protectionism makes life a bit easier for domestic businesses in the short-term," Merkel said, adding that isolationist policies would damage competitiveness further down the line.

"We'll do all we can to get as broad an agreement on this as possible in Hamburg. Given the new American administration that's not easy but nonetheless we need to make the effort," Merkel added.

She said that G20 leaders would also discuss the steel industry, saying that progress needed to be made on the issues of overcapacity and fair competition in the sector.

"There's not just trade - it must be based on rules and needs to be fair," she said.

The findings of an investigation by Trump's administration into whether foreign-made steel imports pose a risk to U.S. national security are expected to be released later this week.

German Economy Minister Brigitte Zypries has written a letter to U.S. Commerce Secretary Wilbur Ross in which she criticized Washington's plans to take action against steel imports, a German newspaper reported on Tuesday.

Merkel also said she deeply regretted Trump's decision to quit the Paris climate pact, which she described as an "ecological must".

She added: "I don't think that changes anything about the arguments in favor of this accord ... so we need to continue with this but I think we have set out an ambitious path and implementing that is now the most important task."