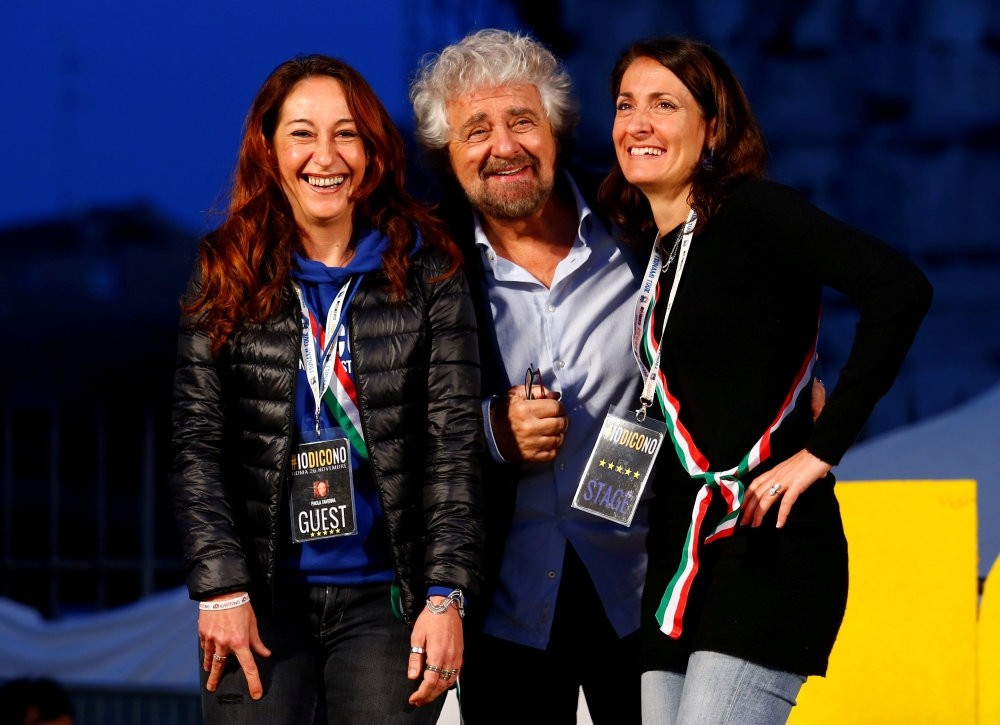 Beppe Grillo (C), the founder of the anti-establishment 5-Star Movement, is seen with party members during a march in opposition to the constitutional reform referendum in Rome.
by reuters Jun 22, 2017 12:00 am

As Italy's most prominent party, 5-Star seeks to find ways to ensure big investors that it can be trusted. Its previously implied euro referendum, which is reportedly their plan B, may trigger some issues for the party as it could be accused of broken promises

Riding high in opinion polls as national elections come into view, Italy's anti-establishment 5-Star Movement is trying to shed its populist image and reassure foreign capitals and financial markets that it can be trusted in office.

But one policy pledge hangs around its neck like a millstone: its plan for a referendum on Italy's membership of the euro currency.

If it backtracks on the referendum plan before the election, its rivals, and possibly voters, will pillory it for broken promises.

If it doesn't, it has little chance of obtaining the international and market acceptance it craves. 5-Star, Italy's most popular party according to many opinion polls, appears to be aware of the predicament.

Carla Ruocco, a prominent 5-Star deputy, told Reuters the referendum was "a negotiating tool" and said: "Big investors and markets should be able to distinguish it from the real intentions of a 5-Star government on the subject of the euro."

The party wants several changes to the euro zone's economic rules to help its more sluggish economies, like Italy. These include stripping public investment from budget deficits under the EU's Stability Pact and creating a European "bad bank" to deal with euro zone lenders' bad loans.

"If you sit down to negotiate you have to have a plan B, and the euro referendum is our plan B," said Ruocco.

A 5-Star insider who asked not to be named said the party, which started out in 2009 on an environmentalist rather than a eurosceptic platform, planned to make as little reference as possible to the referendum from now on.

Ironically, if the party were to backtrack on its referendum pledge, its own voters may not be disappointed: A survey this month by the Washington-based Pew Research Centre found 58 percent of 5-Star supporters took a positive view of the EU.

The change in tone is striking, however.

Only two years ago 5-Star gathered the signatures needed to pave the way for a referendum that it said was vital to restore Italy's fiscal and monetary sovereignty.

Now it is hitting the brakes on the idea.

Luigi Di Maio, the deputy widely tipped to be 5-Star's candidate for prime minister at a general election due by May 2018, has said the euro referendum could not be held for at least a year after the vote.

The highly complicated process would be unlikely to be completed even in a full five-year term of office, as Italy's constitution bans referendums on matters governed by international treaties. It may therefore first be necessary to hold a referendum on whether the euro referendum could go ahead. Even if it did, the result would not be binding.

Last week Di Maio met ambassadors from 28 European countries in Rome to reassure them about 5-Star's fitness for government.

"He was very pro-Europe, talking about reforming EU institutions from within," said one ambassador who asked not to be named. "I got the impression he regretted the euro referendum commitment."

Even in the 2013 election when it made its stunning breakthrough by winning a quarter of the vote, a referendum on the euro was not among 5-Star's policies.

Its hand was forced by growing competition from the right-wing, eurosceptic Northern League, whose support was surging as it tapped mounting anti-euro sentiment among Italians who blamed the single currency and its fiscal rules for a stagnant economy and falling living standards.

In 2014, when 5-Star promised a non-binding, consultative referendum on the euro, it seemed a good way of not handing anti-euro votes to the League while respecting its own credo of direct democracy.

Now the idea has come back to haunt it. Outside Italy it is 5-Star's best-known policy, and any risk of an "Italexit" from the currency bloc is a sign for markets to dump Italian assets. "If 5-Star wins it will take between two and five seconds of the first exit poll for Italian interest rates to shoot up to crisis levels," London-based think-tank Eurointelligence wrote in a recent report.