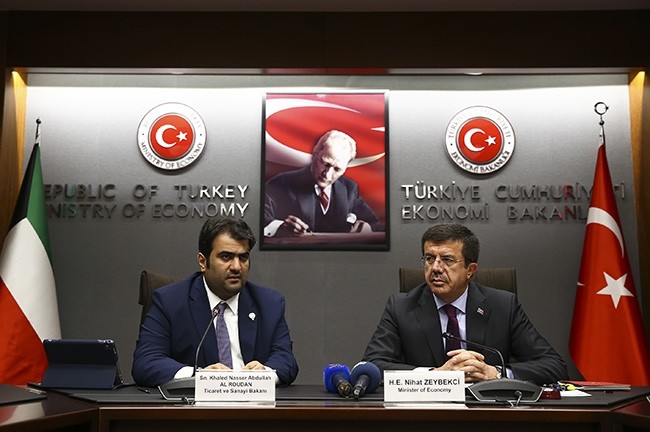 The comments of Commerce and Industry Minister Khaled Nasser Abdullah Al-Roudan came during a high-level meeting in Istanbul to evaluate potential cooperation between two countries, hosted by Turkey's Foreign Economic Relations Board (DEIK).

"Turkey is the world's 17th-largest economy. We appreciate and congratulate your success while wishing to see Turkey among the top 10 economies as soon as possible," Al-Roudan said.

He said there is a great business potential between Turkey and Kuwait, which is planning to make more than $20 billion in investment in the coming years, particularly in the areas of infrastructure, superstructure, and real estate.

"Increasing the number of Turkish investors in Kuwait is one of our prior targets, because we are very pleased with your operations, technology, and workers," he said.

"Turkey is a country that has quality human resources, outstanding capabilities, and high-class products," he added.

Meanwhile, Omer Cihad Vardan, head of the DEIK, said that relations between Turkey and Kuwait have been conducted strategically at every level and that the bilateral trade volume has doubled over the past decade to reach $542 million.

"Our target is to reach a $3 billion trade volume between the two countries as of 2020. The total value of contracts by Turkish companies in Kuwait has reached $6.6 billion," he said. "We are also aiming to double this amount in the near future."

On the various hurdles Turkish businesspeople face in Kuwait, Vardan asked Al-Roudan to help clear them and ensure an efficient business environment.

Vardan also noted that over 250 Kuwaiti firms are operating in Turkey, especially in the real estate, commerce, and financial sectors.

"I have a request of our Kuwaiti brothers: Continue to make investments and create partnerships in Turkey," he said.

"There are certain opportunities that our country can offer you in the other sectors like energy, tourism, agriculture and logistics. Do not limit yourself to just finance and real estate investments," Vardan added.