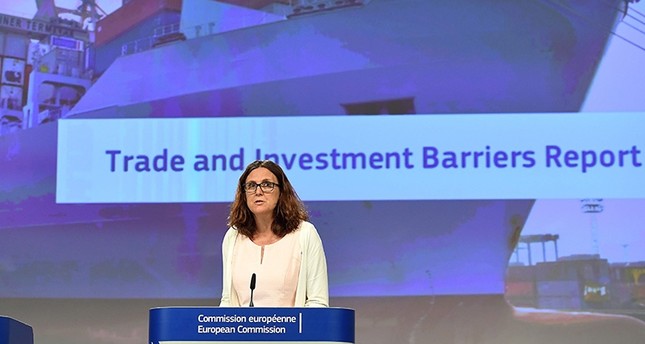 EU Trade Commissioner Cecilia Malmstroem addresses a press conference on the Trade and Investment Barriers Report for 2016 at the European Commission in Brussels, June 26, 2017. (AFP Photo)

The European Union is in a "very intense phase" in its negotiations for a free-trade agreement with Japan and could sign a provisional deal as early as next week, EU trade chief Cecilia Malmstroem said on Monday as the 28-member-bloc seeks new partners upon increasing protectionism in the U.S. with President Donald Trump's election and ongoing diplomatic spat with Russia.

A trade accord with the world's third-largest economy would be the European Union's biggest trade scalp to date. The EU has forecast trade between the two could increase by a third, boosting the EU economy by 0.8 percent and Japan's by 0.3 percent over the long term.

The EU's chief negotiator has been in Tokyo for the past two weeks seeking to conclude talks.

"We are in a very intense phase of our negotiation and hope to close an agreement in principle very soon. This is an agreement that would help us shape globalization in line with our values," Malmstroem said.

EU and Japanese officials have mooted the upcoming G20 leaders summit in Hamburg on July 7-8 as the moment for Japanese Prime Minister Shinzo Abe and top EU officials to sign an initial agreement.

"The date of the G20 has been mentioned... It would be an opportunity perhaps to announce if it's ready... It's an indicative date, but if it's not ready, we'll have to wait," Malmstroem said.

From 2013 until 2016, the EU's principal trade focus was the Trans-Atlantic Trade and Investment Partnership (TTIP) with the United States, but that has been put on hold since the election victory of protectionist-leaning U.S. President Donald Trump. Now the partners of choice are Japan, Mexico and the Mercosur bloc of Argentina, Brazil, Paraguay and Uruguay.

"In the current international environment, an ambitious agreement between the EU and Japan would send a powerful signal to the rest of the world that two of the largest economies are ready to stand up against protectionism," Malmstroem said.

Japan and the EU launched negotiations in 2013 and held an 18th round of negotiations in April, but are still to achieve breakthroughs in key areas, such as Japan scrapping tariffs on EU cheese and wine and Europe giving greater access for Japanese cars and car parts.

Despite the progress in Japan trade talks, on the other end of the Pacific, the EU is preparing to respond to the increasing U.S. protectionism.

Malmstroem said Monday the bloc was "making preparations" to retaliate in the event the U.S. introduces new tariffs on steel imports.

She stated the EU would study any action by Washington to see whether the move complies with the rules of the World Trade Association, the body that oversees global trade.

She added that the indications are that the EU "would be unjustifiably hit."

One reason why Donald Trump became president was his promise to revive American steel. That helped him win states like Pennsylvania.

Protectionism is on the rise, Russia tops new trade barriers introduced to EU exporters in 2016

An annual report published on Monday by the EU also put forward that Russia introduced the largest number of new trade barriers faced by European exporters in 2016.

According to the report, the measures introduced by Russia could potentially affect trade flows worth up to 12.26 billion euros ($13.71 billion).

Along with Russia, the other countries topping the list of places that have introduced the most new protectionist measures in 2016 include India, Switzerland, Algeria and China.

"We clearly see that the scourge of protectionism is on the rise. It affects European firms and their workers," Malmstroem said.

Wines and spirits, agriculture as well as fisheries were the sectors recorded with the highest number of new reported barriers.

The EU catalogued 372 trade barriers against EU exporters in 2016, the largest share of which came from Russia, Brazil, China, India and Indonesia.

"It is worrying that G20 countries are maintaining the highest number of trade barriers," she said.