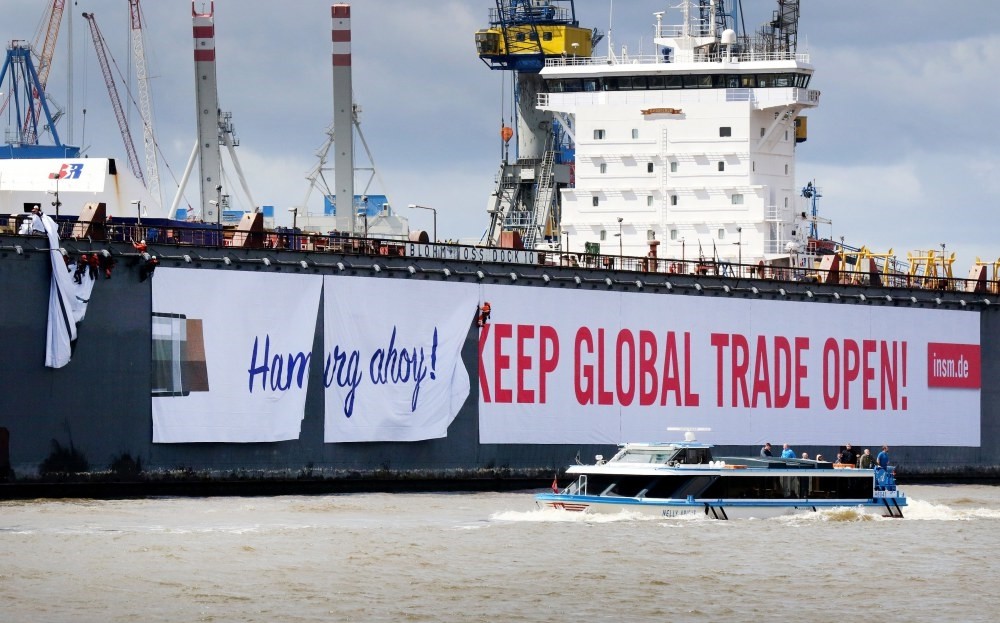 Workers hang a banner reading u2018Hamburg Ahoy! Keep Global Trade Open!, for the lobbyist organisation Initiative Neue Marktwirtschaft (INSM) on the side of a floating dock at the Blohm and Voss shipyards in preparation for the upcoming G20 Summit.
by Jul 06, 2017 12:00 am

Leaders of the leading economies are scheduled to convene in Hamburg this Friday amid regional and global rifts. Aside from the political tensions, the world leaders seem likely to engage in a battle of concerns over climate change and protectionist trade

Leaders of the world's top economies will gather Friday in Germany for likely the stormiest G20 summit in years, with disagreements ranging from wars to climate change and global trade.

Here are some of the most volatile issues and disputes, and the key personalities involved, in the July 7-8 meeting in the northern port city of Hamburg.

North Korea's first successful test of an intercontinental ballistic missile on Tuesday is likely to overshadow all other trade and diplomatic rows.

The reclusive state's relentless pursuit of its nuclear ambitions comes as a slap in the face for U.S. President Donald Trump, who vowed Pyongyang's goal of possessing an ICBM "won't happen."

The tough-talking property tycoon has so far failed to persuade China to bring its rogue neighbor to heel.

Germany has made climate protection a priority of its G20 presidency.

It had hoped to get the world's biggest industrialized and emerging economies to commit to taking the lead in implementing the landmark 2015 Paris climate deal on keeping the global rise in temperatures "well below" 2 degrees Celsius (3.6 degrees Fahrenheit) from pre-industrial times.

But Trump dashed those hopes after vowing in early June that he would pull the world's second biggest carbon emitter out of the Paris accord.

Host Chancellor Angela Merkel admitted that after Trump's announcement, she "knew that we could not expect discussions to be easy."

But she and European allies have vowed to defend the climate pact at the summit, setting them on a collision course with Trump.

Signing up to an anti-protectionist pledge used to be routine at G20 meetings, but not this time.

Trump, swept to power by popular anger over deindustrialization in vast parts of the United States, has pledged to "follow two simple rules: Buy American and hire American."

That has put him at odds with many U.S. trading partners, including export giants Germany and China, whom he has criticized over their massive trade surpluses.

Trump's threats may soon materialize, as Washington is reportedly preparing to impose punitive tariffs on steel imports - something that G20 exporters would be keen to ward off.

The United States in April launched a probe into whether steel imports posed a danger to national security, with the result due within days.

Trump is reportedly waiting to hear from trading partners before announcing his decision on whether to limit imports of the metal.

According to news website Axios, the U.S. leader is leaning toward imposing tariffs as high as 20 percent on the metal - a move that would likely unleash retaliatory measures.

With accusations of Russian meddling in the U.S. elections and contacts between Trump's senior aides and President Vladimir Putin's men, the vexed relationship between the two will be closely scrutinized when they meet face to face for the first time on Friday.

The two leaders face an array of contentious foreign policy issues, from Syria to Ukraine and North Korea.

Trump has struck a tough tone on Russia's ally Syria, while Washington's decision to toughen sanctions over the conflict in Ukraine has angered Moscow.

Another meeting to watch will be Trump's talks with China's President Xi Jinping, particularly after the U.S. billionaire leader in a tweet accused Beijing of not doing enough to rein in North Korea.

Meanwhile, Trump infuriated Beijing last week when he approved a $1.3 billion arms sale to Taiwan, while China lashed out after a U.S. warship sailed close to an island claimed by China, Taiwan and Vietnam.

Merkel also faces a testy meeting with Turkey's President Recep Tayyip Erdogan, particularly after Berlin refused him permission to address ethnic Turks on the sidelines of the summit.

Berlin and Ankara's relations have been fraught, deteriorating sharply over Turkey's mass crackdown after a failed coup last year and a host of other rights controversies.

Outside the conference rooms, anti-globalization activists, including an anticipated 8,000 potentially violent extremists, are squaring up for a showdown with police.

Germany has deployed 20,000 officers from across the country.

Authorities have also banned rallies in a vast area of the city during the summit and stopped protesters from setting up camp.

But the measures have only angered far-left activists, who complain that the city is being turned into a "fortress" and say they still plan to disrupt the summit.