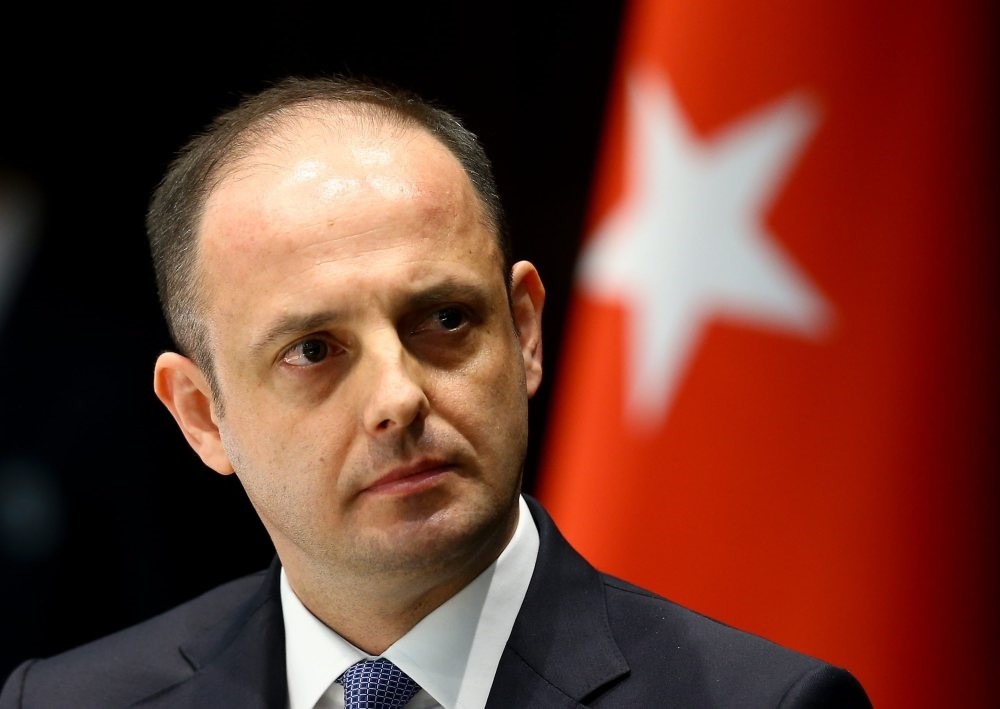 On the night of the attempted coup staged by the Gülenist Terror Group (FETÖ) on July 15, security measures were taken and intense efforts were made to prevent damage to the Turkish economy. One of the key instigators of this response was the governor of the Central Bank of the Republic of Turkey (CBRT), Murat Çetinkaya. As the anniversary of the coup attempt draws near, Çetinkaya spoke to Daily Sabah for the first time about how the institution maintained smooth financial systems in the moments after the coup attempt, as well as how officials managed to thwart widespread panic in the form of money withdrawals from ATMs. Meeting with foreign investors almost immediately in the wake of the coup attempt while coordinating with the economic administration on the phone until the morning after the coup attempt, the Central Bank sought to control the potential for panic and reassure the public. Çetinkaya stressed that the coup attempt was accurately perceived by society as a whole from the moment that news broke of the threat and asserted that the coup attempt was met with strong public reaction. "Compared to the size and severity of the incident, the response of the markets was limited and the losses were quickly recovered. The uncertainty created by the coup attempt lasted only a short time. The Turkish economy successfully passed an important test in the aftermath of the coup."

When asked about the reaction of citizens and the developments in the markets after the coup attempt, Çetinkaya said: "On July 15, we faced a very unusual and unexpected event as a nation. Here, this process was rightly perceived by society from the very first moment after the news broke; and a strong reaction emerged. Compared to the size and severity of the event, we saw that the initial market responses were limited and the losses were quickly recovered in a very short time," The CBRT Governor added that "Even though the coup attempt had an impact on the exchange rate, the stock market, bond yields and risk premiums by disrupting pricing and increasing the volatility in financial markets, we observed that the initial negative developments were largely compensated for in a short time. This means that the Turkish economy successfully passed an important test. The high level of coordination among all relevant stakeholders and the ability of economic institutions, including our bank, to take the quick, effective steps required by the market were influential in terms of the short-term impact of the shocks on the financial markets."

Regarding the steps and policies the CBRT applied in order to ensure continuity in the financial markets and financial intermediary activities in the process following the coup attempt, Çetinkaya said they first assessed the situation with managers of the relevant units, including senior officials, and conducted evaluations accordingly. "We reviewed all the procedures and infrastructures that had been prepared for use in emergency situations to ensure the effective, uninterrupted operation of the systems. Our contacts with our branches and banks were quite intense. Following the implementation of these efforts, we made an announcement to the public on July 17 to summarize the measures we had taken. With this announcement, we aimed to sustain the operation of financial intermediary activities. The message was clear: All measures were taken to ensure smooth operation of the financial system and all additional measures that will be required will continue to be taken punctually," he said.

Indicating that the CBRT announced on the same day that the required liquidity of banks would be provided limitlessly through the removal of borrowing limitations in the Interbank Money Market, Çetinkaya said they also announced that banks would be able to bring unlimited, FX collateral deposit data if needed in order to provide flexibility in Turkish-lira liquidity management.

"We shared the fact that all the markets and systems [Electronic Funds Transfer and Electronic Securities Transfer] before the CBRT would be kept open until the transactions were completed, and that we would closely monitor market depth and price formation. During the days following the coup attempt, especially the first weekend, we urged our branches around the country to work effectively and arduously. We took all the necessary precautions to ensure that the banks maintained the financial liquidity they required to function effectively. Within the scope of other measures taken to maintain the efficient operation of financial markets on July 17, 2016, we made the commission rate of liquidity zero. We reduced the excess surplus / discount rate for Government Debt Securities (GDS) and ensured FX collateral deposit data to be settled in maturity of one week plus two weeks. In the following days, within the framework of another step taken in order to provide additional liquidity to the financial system, we lowered the Turkish-lira-required-reserve ratio, with a decision taken on August 9, 2016," he added.

'Use of cautionary language'

When asked whether the developments of July 15 and thereafter caused any setback or delay in the operational decision-making process of the CBRT's monetary policy, Çetinkaya said: "No, they certainly did not. We held a Monetary Policy Board meeting in the week following the coup attempt. At this meeting, we maintained our normal course by taking steps in accordance with the road map we previously shared with the public. As the CBRT, we were taking steps to simplify our monetary policy in order to contribute to the stability in the period," he noted, adding: "We continued this process by reducing the marginal funding ratio by 25 basis points at the meeting. By using cautionary language, we also stated that we were aware of the risks. However, we decided to continue in line with our road map rather than to use a 'wait-and-see' approach in this process, imbuing the idea that the current process was under control. I think that our decision has yielded positive results. In the week after the coup, we had the opportunity to open effective lines of communication with members of the press and bank economists in the press conference that was held regarding the inflation report. We shared our views on the national economic outlook by conveying clear messages to the public."

Çetinkaya also underscored that he attended a teleconference with foreign investors along with deputy Prime Minister Mehmet Şimşek on the Sunday following the coup attempt, noting: "In this meeting held with representatives and analysts of investor organizations that operate globally, we responded to questions about the possible effects of events on the Turkish economy in general and Turkish-lira-based assets in particular. I think this meeting, in which we underlined the stability of our economy and the financial markets, was an important step taken in that process in terms of our communication policy," he said, adding: "In the following period, we started to hold regular meetings with domestic and foreign investors at the CBRT. Therefore, we got the chance to explain the macroeconomic outlook in detail while closely discussing the priorities of foreign investors as well as the risk areas they have highlighted with regard to the Turkish economy. We still attend meetings relevant to the subject on a regular basis. I believe that the communication strategy we have established is an element that enhances the effectiveness of the monetary policy." Explaining his views on the progress made with regard to the economic activity made in the scope of the process over the past year, Çetinkaya said: "When we look back, we can say that the impact of events on economic growth is limited and temporary. Considering the growth data, we can see that the annual growth of the gross domestic product (GDP) was minus-1.3 percent in the third quarter of 2016, but rose to 3.5 percent in the fourth quarter, driven by the coordinated policy measures taken in the aftermath. In the first quarter of the current year, Turkey achieved a 5 percent growth rate in the similar country group. At this point, we have observed the effectiveness of the steps taken with macro prudential measures and the Credit Guarantee Fund (KGF) in terms of financial intermediaries, with employment packages in the labor market and with public finance measures in consumer durable goods as well as the housing market. The short duration of the environment of uncertainty caused by the coup and its aftermath, as well as the achievement of positive growth rates, point to the solid foundations of the Turkish economy."